Banks make money from the interest they charge on loans—so rising interest rates must be a good thing for banks, right?

“You’re going to get a lot of different answers when you ask different banks,” said Jamie Anderson, chief financial officer at Cincinnati-based First Financial Bancorp. First Financial, which acquired Greensburg-based MainSource Financial Group for $1 billion in May, has 11 branch offices in the Indianapolis area.

The answer, Anderson and others say, depends on many variables, including what type of loans a bank has on its books, local competition, and marketplace demand. A key issue is the percentage of a bank’s loan portfolio that is floating rate vs. fixed rate.

It’s been a long time since banks have had to contemplate an environment where interest rates were on the upswing. To revive the economy following the Great Recession a decade ago, the Federal Reserve dropped the federal funds rate to between zero and 0.25 percent.

The federal funds rate—the rate at which banks lend reserve balances to other financial institutions—stayed at that level until December 2015, when the Fed bumped it to between 0.25 percent to 0.50 percent.

To keep the economy from overheating, the Fed since then has hiked the rate six times: once in 2016, three times last year, and twice so far this year. The most recent increase, in June, brought the range to 1.75 percent to 2 percent.

As the federal funds rate has risen, banks have had the opportunity to raise the interest rates they charge on loans—but some banks will have more opportunity than others.

MORE FROM IBJ
See how the federal funds rate has started inching back up in recent years.

Banks earn a significant portion of their revenue from net interest income—the amount they earn in interest from loans, minus the amount of interest they pay out on customer deposits such as CDs and savings accounts.

Cincinnati-based Fifth Third Bank—the No. 3 player in the Indianapolis market, ranked by deposits—is among the institutions getting a boost. That’s in no small part because of its focus on floating-rate loans, said Steve Alonso, group president for U.S. regions at Fifth Third Bank.

First Financial is in a similar circumstance. Adjusting for the impact of last year’s federal tax cuts, First Financial had a net interest margin in the second quarter of 4.15 percent, up from 3.56 percent a year earlier.

“As rates are moving up, our net interest margin—our spread—is going to expand,” Anderson said. “As rates move up, we’re going to get a little bit of a benefit as that happens.”

But not all banks are experiencing this boost.

For example, Fishers-based First Internet Bancorp saw its net interest margin shrink in the second quarter, to 2.33 percent, down from 2.53 percent at the same point last year.

One big reason, said First Internet CEO David Becker, is that short-term interest rates have risen faster than long-term rates have. This means the bank is paying more to access the funds it needs, but its earnings from loan interest are not rising at the same clip.

On the deposit side, customers shouldn’t expect to see much of a boost in the interest they’re earning on savings accounts, CDs and the like, industry observers said.

Generally, banks aren’t rushing to increase the interest rates they pay on customer deposits—one of the sources of funding a bank can use to make loans.

If a bank needs to attract deposits so it can make more loans, one way it can do this is by paying higher rates.

Before then, Guell said, banks typically held very little in excess reserves. “If they had an amount of money they could loan out, they wanted to loan it out and so they did.”

As a result of the recession, loan demand plummeted for a time. Regulators also imposed stricter banking rules that, among other things, required banks to keep more reserves on hand as protection against loss.

The result, Guell said, is that banks have plenty of money to loan now.

“Banks don’t really need to attract deposits now. They’ve got all the money they could possibly loan out.” 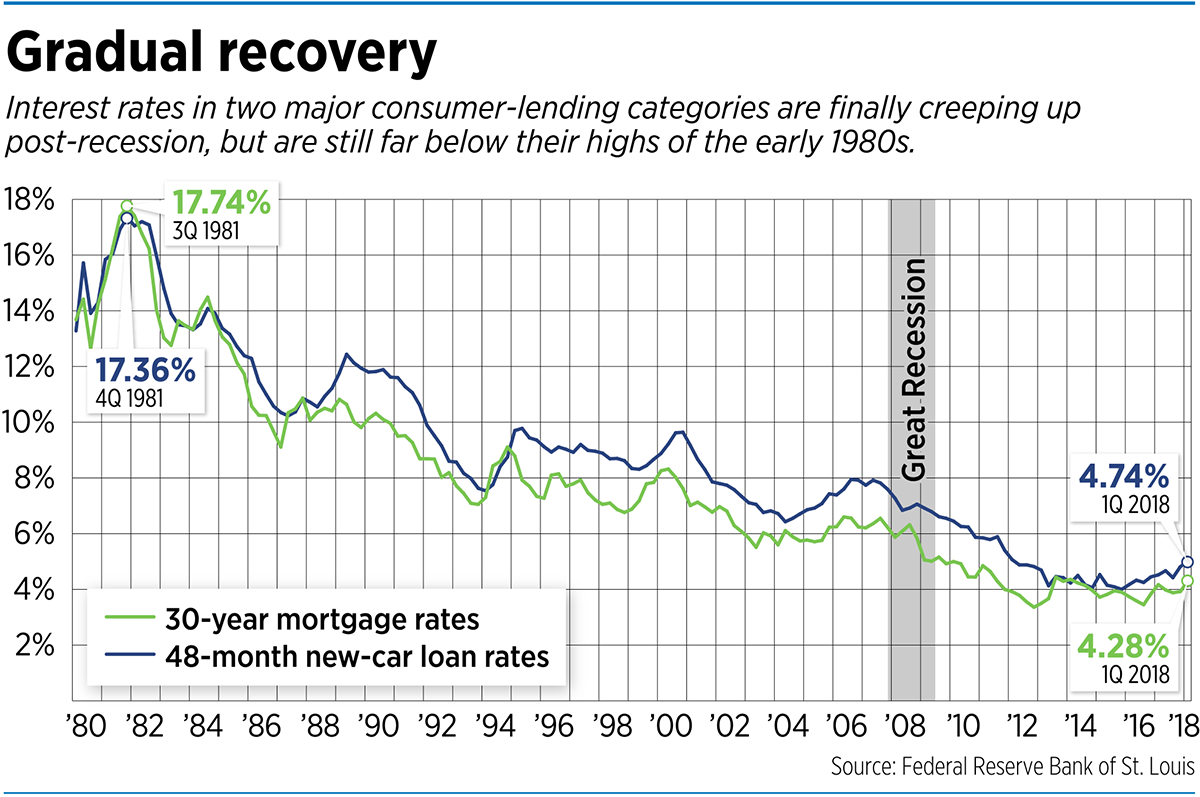 Another factor affecting what banks are willing to pay for deposits is the competitive landscape.

For example, First Financial’s Anderson said, in a rural market like Batesville where there isn’t as much competition, First Financial typically won’t raise its deposit interest rates as much as it will in larger markets.

They note that the Fed likely will continue to raise short-term rates this year and next because it’s concerned about the tightening labor market.

In an effort to stay ahead of any inflation rising wages might generate, the Fed likely will roll out two additional quarter-point federal-funds rate hikes this year, according to a forecast by Kiplinger. That would leave the rate at 2.5 percent heading into 2019, when Kiplinger expects three or four additional increases.

Still, a little perspective is in order.

Rates remain low by historical standards, and mortgages still look ridiculously cheap compared with where they were several decades ago. The average 30-year fixed mortgage is at 4.54 percent, for example. It was nearly 18 percent in 1981.

Meanwhile, the average rate paid on a one-year CD for savers with less than $100,000 is about 0.4 percent. It was more than triple that nine years ago.•