A Carmel-based developer is eyeing 460 acres near Finch Creek Park in Noblesville for a sprawling residential project with a wide variety of home styles.

Pulte Homes of Indiana has filed plans with the city to construct more than 1,500 residential units on vacant land west of Olio Road between 156th Street and 166th Street.

The land would be divided into four sections, each featuring different home types. (Click on map below for larger view.) 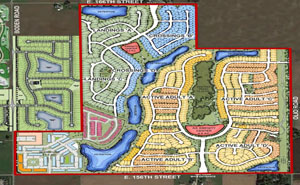 The developer has requested the city rezone the land from the agricultural subdivision district to the R-5 residential district, which allows for higher-density development, and for the planned business district. The request will be heard by the Noblesville Plan Commission on Oct. 15.

The following information is drawn from Pulte's filings with the city. Pulte representatives didn't respond to a request from IBJ for detail on the cost of developing the project or planned home prices.

The project, called Parkside at Finch Creek, would be anchored by a Del Webb age-restricted, active-adult community in Area A on the land’s east side (see yellow and orange lots).

Del Webb will have 650 home sites with three different styles of houses ranging in size from 1,100 square feet to 2,500 square feet. The homes will cater to buyers 55 and older who are active and still want to live near family, friends, church, doctors and other elements of their daily routines, according to a packet submitted by the developer.

The active-adult portion of the development would also include a community center that would occupy 4.6 acres. The center would have a pool, tennis court, pickle ball court and bocce ball court, plans show.

Del Webb, now part of the Pulte Group, was founded in the early 1900s by Delbert Webb and is now one of the country’s largest developers of retirement communities.

Del Webb also has age-restricted communities in Plainfield and Fishers. In Plainfield, the homes start at $155,000, and in Fishers they start at $189,000. The homes in Fishers draw from the same collections that would be offered in Noblesville.

In addition to the age-restricted, active-adult community, Parkside at Finch Creek would include single-family attached and detached homes, 300 market-rate apartments and a 6-acre retail area (see orange lots) at the northeast corner of 156th Street and Boden Road that would serve the neighborhood.

The project also would include plans for 150 senior apartments or an assisted- or independent-living facility that could include memory care. The apartments and senior living portion would be built in the southwest corner of the development, which includes the retail portion.

About 350 single-family homes will be built on the north end of the property in Area B (see green and blue lots). That portion of the project would feature Pulte’s The Landings and The Crossings series and range in size from 1,600 square feet to 3,300 square feet.

An additional 125 homesites will be reserved for specialty housing, offering buyers an alternative to the traditional single-family home. Buyers can select from Pulte’s Encore series of attached homes or the Cornerstone series of detached homes. Those homes would range in size from 1,900 square feet to 2,400 square feet. Those homes would be built in Area C (see pink lots), between the single-family section and the mixed-use portion of the project.

In documents submitted with the city, Pulte said Parkside at Finch Creek would provide a wide range of housing options to support the age-in-place movement. The project also complies with the city’s 2016 housing study, which identified a growing need for empty-nester home products.

If the project is approved, Pulte would plan to start development early next year.