The latest buzzword in mobile is 5G—the newest generation of wireless service that immediately promises more speed and better connectivity for smartphones, internet-connected devices and even autonomous cars.

But 5G is about more than speed. Experts call it a transformational technology that could eventually mean unprecedented battery life for devices (think a month before charging your smartphone) and lag times shorter than the blink of an eye, making videoconferencing as good as broadcast TV.

And nowhere in the country will 5G be more available than it will be soon in Indianapolis, where both Verizon and AT&T—which have the nation’s two largest wireless networks—are rolling out the technology by year’s end. Verizon, however, is phasing in 5G—starting with residential wireless before expanding to mobile.

“Not only from a technological standpoint, but from a public relations perspective, this is a really big deal,” said David Love, a professor of electrical and computer engineering at Purdue University.

“It tells you that Indianapolis is being mentioned in the same breath as Austin, the Bay Area and other tech epicenters,” he said. “This is enormously important for the city of Indianapolis and the state.”

In fact, Houston is the only other city in the country that will have 5G service from AT&T and Verizon this year.

Love said the early rollouts will help the metro area recruit talent and new business—especially in the tech sector. “People and businesses definitely take notice of these types of developments,” Love said. “It’s big news.”
The G in 5G stands for generation—as in generation of wireless technology. And with each generation, new capabilities have emerged. In the 1980s, the first generation allowed mobile phone calls for the first time without a rare and expensive satellite phone. In the 1990s, 2G allowed text messages. In 2000, 3G allowed voice, text messaging and email as well as some web browsing and apps. In 2010, 4G allowed video on mobile and other devices—which gave rise to the popularity of services such as YouTube.

But experts say 5G is different.

“The others were evolutions. We think 5G is a revolution,” said John Granby, Verizon’s president of Great Lakes Market. “It’s going to enable all kinds of new enterprises—some not even imagined yet.”

Officials at AT&T and Verizon say it wasn’t a hard decision to bring the technology to Indianapolis, thanks in part to the attitudes of local and state officials.

“Policymakers in Indiana have been working on reform to make this possible for more than a decade,” said AT&T Indiana President Bill Soards. “Indiana has the right policies in place and the cooperation of various government agencies has been extremely helpful in bringing this new technology to market.”
State lawmakers even penned legislation this spring limiting municipalities’ ability to stifle the infrastructure needed for 5G service.

The groundwork for 5G was laid in 2014 when then-Lt. Gov. Sue Ellspermann formed the Indiana Rural Broadband Working Group, said state Sen. Jim Merritt, R-Indianapolis. The Legislature also passed measures in recent years to make wireless service more available statewide and to grease the skids for evolving technology.
“We bent over backward to work with Verizon and AT&T and other service providers to write good legislation law,” Merritt said.

Thomas Cook, chief of staff to Mayor Joe Hogsett, said not only were city officials willing to work with state lawmakers on the issue, the city also brought together all utility and service groups to make sure everyone was working toward the same goal.

Cook said the city has “a pretty good playbook” to promote the adoptions of new technology while assuring “there’s as little impact as possible on existing infrastructure.”

In addition to 5G’s being good for local residents and businesses, Cook said, it will have major ramifications for city services and the way local government is able to operate. The technology will help allow for improved security cameras, street lamps that notify city officials when they need to be replaced, and maybe even alerts to officials about road conditions, he said.

“Going forward,” Cook said, “this infrastructure will be as important as sewer lines and streets.”

Initially, there was some concern about the amount of infrastructure needed to support 5G, which relies on many smaller antennas rather than the few large cell towers wireless communication has traditionally used. But Cook said city officials were “pleasantly surprised at how much 5G providers’ and neighbors’ interests aligned.”

Already, more than 1,000 antennas—called small cells—have been constructed in the Indianapolis area in the last two years, according to the Federal Communications Commission. Many—especially downtown—are perched on street lights, traffic lights and buildings.

The concept behind 5G is that small cells that are closer together and closer to users result in faster and more reliable service.
But the investment is huge, which means wireless companies are choosy about where they’re spending their initial outlays.

Verizon works with the IndyCar Series, where it’s a title sponsor, and at Lucas Oil Stadium, where it was a key wireless provider during the 2012 Super Bowl. Those experiences helped Verizon executives become familiar with local government officials and their willingness to get things done for businesses.

That has given the company the confidence to invest $932 million in this market since 2015, Granby said, which helped pave the way for 5G.

“The infrastructure in Indianapolis is world-class,” he said. “That has given rise to a burgeoning tech ecosystem. And that coupled with the way government bodies work with businesses and each other made this the right place to make this investment.”

The advantage, tech experts said, of getting 5G this year from two major providers goes beyond just optics.

While AT&T and Verizon, along with a handful of other providers, will begin rolling out 5G in earnest next year, blanketing the entire country could take many years.

“Each generation—whether 2G, 3G or 4G—has taken a decade to roll out,” said Indiana IoT Lab founder John Wechsler. “Indianapolis will be getting 5G in a matter of months. There are some markets—major markets—that won’t have 5G for a number of years and maybe quite a few years. So the advantage here is real.”

AT&T earlier this year announced that 12 cities will get its 5G mobile service this year.

Tech experts said Verizon will no doubt hurry to get its 5G for mobile users deployed—like AT&T has—and Indianapolis will likely be an early market.

“We know that access powers innovation,” Andersen said, “and 5G will play a critical role in boosting our tech and innovation economy.”

Speed is the first trait that comes to mind every time wireless communication graduates to the next generation. And rest assured, 5G will be faster than 4G.

How much faster? Early estimates predict at least 20 times faster. And some tech experts said that, once the technology matures and devices and apps catch up, it could be far more than 100 times faster than 4G.

To put that in perspective, if it’s 60 times faster, which most tech experts think is well within the realm of possibility, a high-definition movie that took 10 minutes to download with 4G could be downloaded in 10 seconds with 5G.

Not only can 5G make wireless videoconferencing as good as the video you get from a TV broadcast, the speed also allows new real-time execution of some computer operations. Think remote robotic surgical procedures.

The speed of 5G, Love said, also makes tactile sensations possible in new ways. What does that mean in practical terms? With 5G, you could watch a documentary about a cave thousands of miles away, and wear a special glove that allows you to reach out and feel the cave walls, Love said.

But AT&T’s Soards said 5G’s capabilities go far beyond just speed. They also allow devices to talk to one another in new ways.

“This massively opens up the internet of things,” the catch phrase for wirelessly internet-connected devices, Wechsler said. “It paves the way for things like autonomous vehicles.”

And, Soards said, 5G is so smart that the small cell antennas associated with it can adjust the way they connect to each device based on the device’s location and needs. Not only does this assure optimal connectivity and speed, it also helps devices preserve battery power. 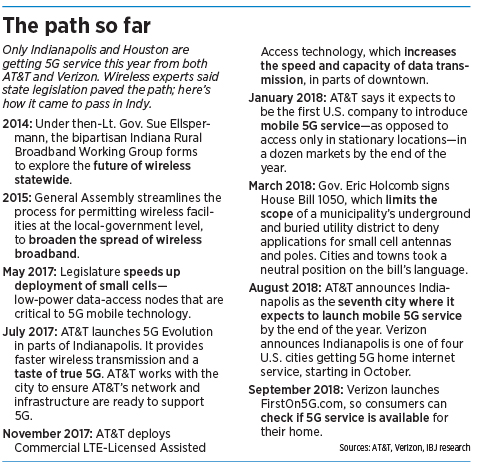 5G, Soards insisted, “is transformational. It’s about enhanced computing power.” And since more of the computing is happening in the cloud and not on individual devices, that, too, helps lengthen battery life. “5G is driven more by software than hardware,” he said.

Speaking at IBM’s Think 2018 Conference this spring, Verizon CEO Lowell McAdam dropped this bomb: “By the way, in an IoT setting, 5G will have 10-year battery life. And we expect that, in a mobile phone environment, you’ll probably charge your phone once a month.”

That’s right. McAdam said a cell phone that now needs a charge every 24 hours would need a charge every 30 days in a 5G world. And he added that devices connecting via 5G could be ridiculously thin.

Capacity frustrations could also soon be a thing of the past.

What does that mean? It goes way beyond relief from family members crowding one another off the home network.

At home, 5G will let you connect your smartphone, wireless thermostat, video game console, smart doorknobs, virtual-reality headset, wireless security cameras, tablet and laptop all to the same router without worrying about overload.

AT&T has 20 million devices connected to its 4G network nationwide. With 5G, Soards said, AT&T projects having 20 billion devices attached to its network “in the next few years.”

“5G will have an immediate impact here,” Wechsler said. “Not only will it enhance life for our residents, but it will provide a great opportunity for innovation here. This type of early development assures that we’re not just consumers of a new technology, but that we’re a player in this realm, and that helps build a thriving tech ecosystem.”•