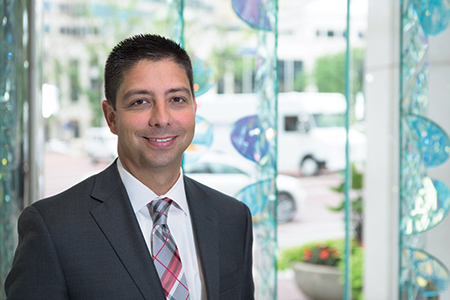 Rafael Sanchez, who left his job as president and CEO of Indianapolis Power & Light Co. this year as part of a corporate restructuring, has landed a new position with another of Indiana’s corporate heavyweights.

Sanchez will join Evansville-based Old National Bank on Nov. 26 as president of private banking, ONB announced Tuesday morning. He will be based in Indianapolis.

“We are incredibly excited that a leader of Rafael’s unique abilities is joining our organization,” said Old National President and Chief Operating Officer Jim Sandgren in written comments. “We are confident that empowering Rafael to focus exclusively on private banking will elevate Old National’s commitment to, and ability to serve, this important client base.”

Sanchez, 44, will lead a team that has clients throughout Old National’s five-state territory, the bank said. ONB is the largest bank headquartered in Indiana.

IPL appointed Sanchez president and CEO in June 2016, following his four-month apprenticeship as the utility’s senior vice president of strategic planning. But he departed after Arlington, Virginia-based corporate parent AES made a “global strategic transformation” at the utility in February that eliminated 100 jobs.

Craig Jackson was named president and CEO of both IPL and sister company Dayton Power & Light.

Sanchez began his career in 1999 as a retail banker with National City Bank in Fort Wayne.

A native of Puerto Rico, Sanchez also was vice president of business development & legal affairs for Indianapolis-based Fineline Printing Group.  Before that, he was a business attorney at the local law firm of Bingham Greenebaum Doll LLP.

Sanchez received a bachelor’s degree in social sciences and political science from the University of Puerto Rico, and his law degree from the Indiana University Maurer School of Law.