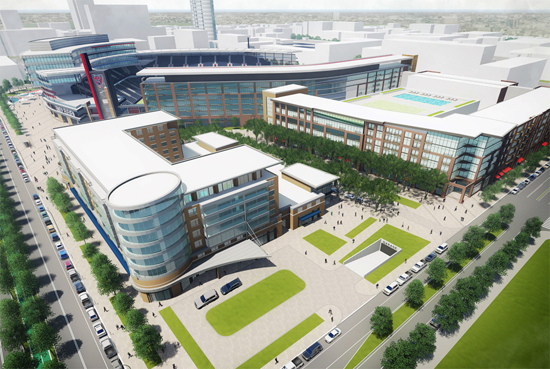 The Indy Eleven on Thursday unveiled a proposal for a $550 million mixed-use real estate district that would include a 20,000-seat outdoor soccer stadium as the team continues its quest to join Major League Soccer.

The project includes a financing plan that would require action from the City-County Council and the Legislature. Team owner Ersal Ozdemir told IBJ that the club is working with the city of Indianapolis and the Capital Improvement Board to create detailed plans for the public-private development.

Ozdemir said he envisions the development, called Eleven Park, as a “transformational urban project” within the city. Plans for the district include lodging, office and retail space, public spaces, an underground parking structure and apartments. The focus, Ozdemir said, is to create a long-term, sustainable home for soccer in Indianapolis.

“We wanted to make a major impact, not just a stadium,” he said. “Whether you like sports or not, it's hard to argue with this project because of (what it involves).”

Ozdemir said discussions with city and state officials have included where the development would best be located, noting there are “several sites in downtown Indianapolis” and one elsewhere that are viewed as good fits for the team. He declined to share the locations but said the team hopes to finalize the selection soon.

The proposed stadium, slated to be ready for the 2022 season opener, would be surrounded by multiple apartment and office buildings, offering tenants views of the field from their windows. 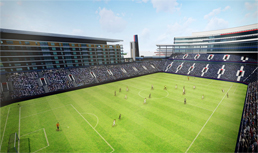 The stadium design calls for 20,000 seats, but the venue could be expanded if future need dictates. (Rendering courtesy of Indy Eleven)

Ozdemir, who owns the Indianapolis construction and development firm Keystone Group, said the stadium design allows for future expansion if the team’s fan base continues to grow or if MLS increases its minimum stadium capacity, which currently is 20,000.

He said the stadium would include a section specifically for team fan club Brickyard Battalion, designed for fans who generally spend the entire game on their feet.

“The CIB applauds Indy Eleven for looking ahead to future needs and taking a developer-led approach to protect taxpayers and support their vision to integrate the sports experience into the overall community development efforts for the state,” she said in a written statement.

Kennedy wasn’t available to discuss the proposed financial structure of the project, which differs from those used to build Lucas Oil Stadium and Bankers Life Fieldhouse, largely because the Eleven plan includes adjacent development that could generate tax revenue to help pay for the project. Like both of those stadiums, the Eleven proposal would redirect tax revenue to fund construction.

The Eleven Park proposal calls for enactment of new Professional Sports Development Area, or PSDA, and tax-increment financing district overlays limited to the park’s boundaries, as well as a 10 percent ticket tax.

The overlays would capture all tax revenue generated within the district for the purpose of funding construction of the stadium.

Developer-backed bonds would be issued to pay for the stadium, which is estimated to cost $150 million. Tax overlays on revenue generated by the rest of the development, which would be funded with $400 million in private investment, would be expected to cover payments on the bonds..

The city would issue the bonds for the stadium and other public parts of the development (including parking and the plaza area) with the understanding that the team would cover any shortfalls. Developer-backed bonds have become a favored tool of Mayor Joe Hogsett’s administration to help pay for major real estate projects.

In a written statement, Taylor Schaffer, Hogsett's deputy chief of staff, said: “Indy Eleven has continued to update the city on their work to construct a permanent home for their team, and we are encouraged by their current focus on a taxpayer-friendly strategy that is backed by private development."

She said the city remains “interested in the prospects and possibilities presented by a top-tier, financially sustainable professional soccer team in Indianapolis.”

Under Ozdemir's proposal, while much of the other development at Eleven Park would remain under the control of investors in the project, the stadium would be owned by the CIB and leased to the team. It also would be made available to high school, college and other professional soccer games.

Ozdemir said the team is prepared to sign a long-term lease for the stadium and remain in Indianapolis, as well as commit to cover all operating costs for the stadium. The team’s headquarters and operations would move from its downtown and Westfield Grand Park offices to the new facility.

The Eleven played its 2018 season in Lucas Oil Stadium on a rent-free basis. But Ozdemir said the stadium is too large to be a long-term solution. He pointed to difficulty in scheduling games and the desire for the team to have “a permanent home” in Indianapolis.

Team representatives said they are working with legislative leaders on the Eleven Park project. It is unclear, however, which lawmakers are working on a bill.

Ozdemir said public-input sessions would be held for the TIF district overlay, which would require approval by the Indianapolis City-County Council.

State lawmakers would have to approve the creation of the PSDA for the district.

State Rep. Justin Moed, D-Indianapolis, said he's interested in seeing the proposal but would be cautious about moving forward without having a specific site determined. He suggested having experts analyze potential locations to determine which could generate the biggest economic impact.

“I think when you have a project of this size, we should make sure that we make an educated decision on where that’s going to go,” Moed said.

But he doesn’t think that would delay lawmakers from voting on a bill this legislative session, which is scheduled to wrap up in April.

A bill authorizing the Indy Eleven PSDA is expected to be filed in the Senate, but the issue could get folded into other legislation that would provide more funding for the Capital Improvement Board.

Moed said his other concern is making sure most—if not all—of the investment risk is on the team, rather than taxpayers.

“We need to make sure the deal is done right, so taxpayers are protected,” Moed said.

The Eleven Park proposal differs greatly from an unsuccessful pitch for a new stadium that the team rolled out in 2015, both in its funding and overall design. The previous proposal called for a publicly funded, $82 million freestanding stadium with few additional elements.

The push, backed by several lawmakers and then-Mayor Greg Ballard, died in the General Assembly. An alternative proposal to renovate the Eleven's home at the time—the Michael A. Carroll Track & Soccer Stadium on the IUPUI campus—was shot down by the team.

Sports business expert and consultant Mark Rosentraub said the Eleven's new proposal, including its scope and funding mechanisms, is generally a good fit for the city, even if it doesn’t result in scoring an MLS franchise. The team moved to the Division 2 United Soccer League in 2018 after spending its first four years in the North American Soccer League. Its long-term goal is to play in the top-tier MLS.

Rosentraub said one strength of the plan is that it doesn’t rely on much public funding, outside of what’s generated within the district itself.

“This could fit well with the (city’s) plans,” said Rosentraub, a professor of sports business at the University of Michigan and a former professor at IUPUI. “That’s what you try to encourage; what you don’t want is to throw down a stadium that has nothing happening around it. … This project seems to do a lot more than that.”

Professional soccer teams generally play 15 to 18 home games per season, meaning the stadium wouldn't be a year-round traffic driver for the area, he said. The inclusion of apartments, retail and office space makes it a more viable project because the area wouldn’t be solely reliant upon soccer for revenue.

However, Rosentraub expressed skepticism about Indianapolis’ ability to absorb another major sports franchise should a future MLS bid be successful.

“I don’t know if the market can sustain three teams at the (highest) level,” he said. “The Indy Eleven right now is in a very sweet spot in the economy, when you think about … what the market can support.”

Rosentraub said he would say the same thing if a proposal were made to replace the AAA Indianapolis Indians with a Major League Baseball team.

He said that even if the Eleven remain indefinitely in the USL, the stadium project would be a boon for the team as it seeks to grow its fan base. The Eleven's ticket sales have been on the rise, with crowds averaging more than 12,000 last year.

Ozdemir has long said he doesn't think the addition of another high-level sports franchise would hinder growth for other local teams. He also is confident there are enough soccer fans in central Indiana to make an MLS squad here viable.

As part of his quest to land an MLS franchise, Ozdemir has sought to bring in other investors. An announcement is expected within months on a new investor group for both the team and the Eleven Park development. (Nate Feltman, a shareholder in IBJ Corp., which owns Indianapolis Business Journal, is an adviser to Ozdemir but does not have a direct financial stake in the team.)

The buy-in fee for an MLS franchise is around $200 million—a price Ozdemir has said he and investors in the team would be willing to pay. A bid by the team in 2017 fell short, and future bids are likely to face stiff competition, so it's unclear how long the Eleven will have to wait to get another shot at the league.

Before it missed out on landing a franchise two years ago, the Eleven announced a handful of new investors, though those commitments were never formalized. The announced backers included auto dealer Andy Mohr; Elwood Staffing President Mark Elwood; Heritage Environmental Services President Jeff Laborsky; and Mickey Maurer, a shareholder in The National Bank of Indianapolis and IBJ Corp.