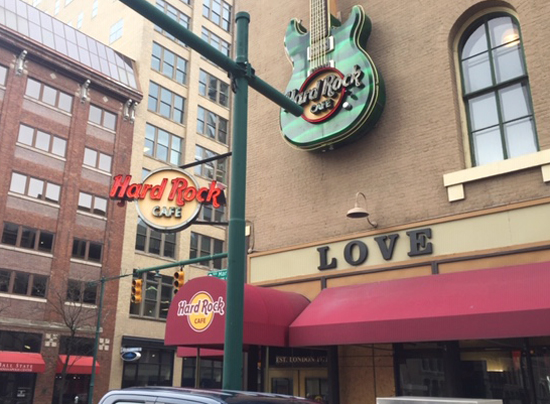 After 20 years of blaring rock and roll to pedestrians and slinging American cuisine, the restaurateur behind Hard Rock Cafe is pulling the plug on its location at 49 S. Meridian St.

In a statement to IBJ, officials for Florida-based Hard Rock International said that the lease for the downtown restaurant would expire in March and that its last day would be March 18.

When the location opened in 1999, Hard Rock was still considered a fashionable brand and a good get for a downtown in the midst of a renaissance powered in part by Circle Centre mall. It hung its hat on popular culture and in particular on rock music, populated with iconic posters and playing hard-edged tunes.

The first Hard Rock Cafe opened in 1971 in London. It currently counts more than 180 cafes worldwide.

A representative for Hard Rock International said Friday that the brand “remains committed to the city and is open to having another location within the market, if the right space can be identified.” The company did not immediately address why it isn’t renewing its lease.