Already swamped with higher debt costs due to a bond refinancing fiasco, the city’s Department of Waterworks is priming
next for a battle over capital projects that include repairs to a crucial dam.

Among projects that would be funded
by a general rate case the department plans to file with regulators on Sept. 30 is construction of a water intake at its flagship
treatment plant, at a cost of $27.5 million. Shoring up the dam spanning the White River, in Broad Ripple, will cost another
$2 million.

The dam—parts of which predate Thomas Edison’s invention of the light bulb—raises
the shallow river high enough to spill into the Central Canal and on down to a water treatment plant northwest of downtown. 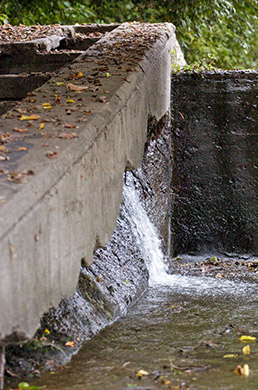 Water leaks out of the east side of Broad Ripple Dam. A $2 million repair is planned by city’s Department
of Waterworks as part of rate case. (IBJ Photo/Robin Jerstad)

The dam and the canal it feeds are crucial to the lifeblood
of the city, both literally and economically. They account for 60 percent of the city’s water supply, or 90 million
gallons a day.

The proposed $27.5 million intake, which would tap into the White River closer to the treatment
plant, would serve as an emergency backup in the event the dam or canal fails. The alternative intake could also be used temporarily
during canal maintenance.

Though the proposed dam project by comparison is a sliver of the capital request to
be submitted, it is a crucial part of the water system’s infrastructure.

High water last February
lifted two large slabs of concrete from the apron on the downstream side of the nearly 10-foot-tall dam, according to department
records.

“If the dam fails, then there will be insufficient raw water flow from the White River through
the canal to the White River Treatment Plant,” the department stated in a recent filing with the Indiana Utility Regulatory
Commission.

The filing states the department intends to spend $683,000 on design and permitting for an interim
dam on the White River and to develop a preliminary cost estimate for a permanent replacement of the existing dam.

Such a replacement—likely costing several million dollars—will not be included in the upcoming general rate
case, said Jo Lynn Garing, spokeswoman for the Department of Waterworks.

A large section of concrete missing from a portion of the dam is of “particular concern,” said
engineers from ATC Associates Inc., who inspected the dam in July of last year.

“While there is no indication
that this or any other observable condition presents an immediate threat to the integrity of the dam, it is recommended that
the damaged portion of the apron be repaired in the relatively near future since a progressive deterioration in a relatively
short period of time cannot be ruled out for a dam of this age,” wrote engineers James Luckiewicz and David Warder.

They recommended the dam be inspected monthly. The Indiana Department of Natural Resources generally inspects so-called
low-head dams of this type only about once every five years.

The dam has some seepage and there are some holes
and notches in the concrete, but the ATC engineers said it “appears to be in generally good condition and functioning
properly.”

“We don’t anticipate a catastrophic failure of the dam,” Garing said.

But the city’s primary water supply system is showing its age and vulnerability.

According to the
ATC report, the concrete portion of the dam appeared to have been built sometime before 1921. Portions of the original dam—on
its outer edges near the shore—date back to the 1830s, when the canal was dug between Broad Ripple and downtown. It
was for a short time a channel for small boats and part of a broader offshoot of the Erie Canal system.

The original
portion of the dam was built with an intricate system of logs overlain by a triangular structure that consisted of alternating
layers of wooden planks and boulders, according to an inspection report. In some places, cribs made of wood planks were filled
with boulders.

Another firm hired by the department, HNTB, said in a meeting last June with city and DNR officials
that the dam was showing its age.

The approach recommended at that meeting was that the department begin design
and construction of a temporary replacement dam upstream of the existing one.

“Develop emergency action
plan to address failure of, or impending failure of, sections of the dam,” stated a document from HNTB filed with the
DNR. “Start construction of temporary replacement structure—as soon as regulatory permits received.”

Garing reiterated that the department did not see any danger of imminent dam failure and that a replacement was
probably at least three years out.

The consequences of a canal failure were underscored in 1992, when an earthen
wall collapsed, stopping the flow of water to the White River treatment plant. In what earned headlines nationwide, the city
imposed emergency water usage restrictions and boil-water orders as construction crews scrambled to rebuild the canal wall.

Water department officials did not
have a list of other projects or a grand total of capital projects ready to disclose before the Sept. 30 filing.

“We have a lot of ‘got to do’ projects,” said Matthew Klein, the department’s executive director
since March. Previously, Klein was head of enforcement at the Indiana Department of Environmental Management.

On the list will be any number of replacements of portions of the water system’s 4,000 miles of pipes, along with mandated
upgrades in water quality equipment. The U.S. Environmental Protection Agency has given water utilities until 2012 to install
ultraviolet disinfection systems as an additional safeguard against cryptosporidium and giardia, which cause gastrointestinal
illness.

The department already has spent $12 million at White River and may need to spend an additional $16
million on two other plants.

Those are among the $163 million in capital projects through 2012 intended for the
city’s water system—part of more than $600 million in repairs and upgrades eyed for the next 15 years, according
to a solicitation for ideas Mayor Greg Ballard released in July.

The city’s water system, Indianapolis Water Co., is operated for the waterworks department under
a contract with French-owned Veolia Water. Earlier this year, the IURC approved an emergency rate hike of 12.3 percent—or
$3 per month—for the average residential customer, to help the department blunt the effects of more than $25 million
in additional annual debt-service costs. The department had sought a nearly 18-percent emergency rate hike.

In 2005, in what looked like
a no-brainer way to free up an extra $45 million in extra cash for capital projects, the department, through the Indianapolis
Bond Bank, converted fixed-rate bonds to variable rate with such abandon that variable issues grew to about 60 percent of
its $845 million in outstanding bond debt.

Bond swaps intended to mitigate the risk of interest-rate variations
failed to backstop the risk as financial firms involved in the deal collapsed or saw their credit ratings plunge. The result
was higher interest rates that in some case rose to 9.5 percent from 3.5 percent. The department is converting variable-rate
debt back to fixed, but the cost is in the tens of millions of dollars, spread over decades.

The consequences
of what was in hindsight a foolish refinancing strategy will now be borne by ratepayers. Industrial water users, in particular,
are boiling mad.

“We will be looking at all aspects of their case very critically,” said Bette J.
Dodd, an attorney at Lewis & Kappes PC, which is representing industrial water customers before the IURC.

Klein noted the criticism the IURC leveled at the department during the emergency rate case. He said one goal of the general
rate case is to boost confidence in the department’s financial, managerial and technical capabilities.•