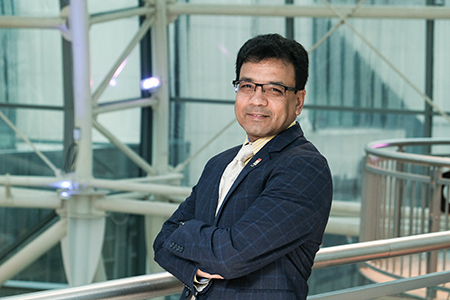 Raju Chinthala had never heard of Indiana before he came to the United States from India in 1994. In the 25 years since, he has become one of the state’s greatest champions.

For the past 10 years, Chinthala has worked—primarily as a volunteer—to build relations between companies in Indiana and India, arranging and often leading trips there for Indianapolis Mayor Greg Ballard, Gov. Eric Holcomb and Indiana Secretary of Commerce Jim Schellinger.

The payoff came in May 2017 when Indian tech giant Infosys Ltd. announced plans to open an innovation hub in Indianapolis that was expected to create 2,000 high-skill jobs by the end of 2021. In April 2018, Infosys and the state announced an expansion of that deal, which now has an anticipated investment of $245 million and is expected to create 3,000 jobs.

“It is a proud moment for me to come here and become a citizen and then represent the state of Indiana in India for economic relations,” said Chinthala, who was named senior adviser for India at the Indiana Economic Development Corp. in 2018. “And as Gov. Holcomb says, we cannot spell Indiana without India.”

“Raju is very passionate about growing the relationship between India and Indiana, and that comes across in his work,” he said. “He is bold and direct, and plays an important role connecting stakeholders from both states to discuss further opportunities for cultural and economic partnerships.”

Chinthala’s “India-to-Indiana story,” as he calls it, began in Hyderabad, a city of 6.8 million in south-central India. He studied to be a speech therapist, finishing his master’s degree in 1993. The next year, he got a job interview in Michigan.

On Nov. 6, 1994, he landed in Detroit with an H-1B visa, which allows U.S. employers to temporarily employ foreign workers in specialty occupations. 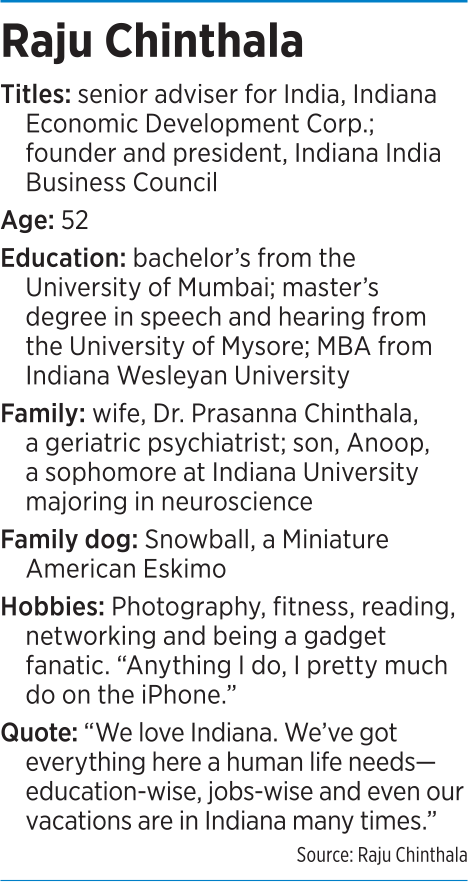 A year later, he went back to India to meet his bride. He and Prasanna were married on Nov. 26, 1995, and moved to Reed City, in upstate Michigan. That Christmas, a friend doing his doctorate at Purdue University invited them to West Lafayette, and that led to their first visit to Indianapolis.

They moved to Indianapolis in 1996, and while he traveled around the state for his job as a speech therapist, Prasanna studied for medical school.

During the next dozen years, they had a son, Raju earned his MBA from Indiana Wesleyan University, and both he and Prasanna went through the process to become American citizens.

Till that point, they weren’t sure whether they would stay in Indiana. But in 2008, Ballard appointed Chinthala to a committee called the Sister Cities International of Indianapolis. The mayor asked him to find a sister city in India for Indianapolis.

Ballard doesn’t recall the first time he met Chinthala—“he was just always there”—but said, “He’s a special guy, and that was obvious to me early.” In April 2010, they made a trip with a trade delegation to India, during which Indianapolis and Hyderabad, Chinthala’s hometown, became sister cities.

“He has all the contacts, he makes sure everything is set up, and he’s a master of making sure that everyone we need to talk to, we do talk to,” Ballard said. “People return his phone calls. He has the ability to put things together at a really high level.”

Ballard continued to nurture the relationship with Hyderabad when he returned there in 2013 and he and his wife, Winnie, famously planted a tree on the Infosys campus. That made an impression on Infosys executives, as did Chinthala’s persistence. But Infosys said it had no plans to expand its operations. (Infosys declined IBJ’s request for an interview.)

In the meantime, Chinthala founded and became president and CEO of the Indiana India Business Council in 2015. And when he read that Infosys was expanding its operations, he continued to text the company’s president, Ravi Kumar, inviting him to Indianapolis.

“They kept saying they had no plans to come to smaller cities,” Chinthala said. “I said, ‘Indianapolis is not a small city. At least come and visit us.’”

In February 2017, they did. Schellinger “put out the red carpet for them,” and the visit ended with Chinthala driving the Infosys executives to the airport. While he was there, Schellinger called him and suggested that since “they came to Indianapolis, we should go to India.”

Three weeks later, they were in Bangalore, talking to Infosys leadership.

“They never thought we would make that trip,” Chinthala said. “They told us, ‘No one has done this. No one has come to us this quick.’ They have 50 states to go and expand their operations anywhere they choose. But when they saw Secretary Schellinger visiting their office after their visit, that built the relationship between company executives and Indiana. That made a big impact.”

By May, Infosys and Indiana had a deal. And a year later, they had an even bigger deal.

Ballard remembers bumping into a senior Infosys official at an Indiana Pacers game last year after the announcement of the company’s expanded plans for Indianapolis. The man asked, “Mayor, do you know why we came to Indianapolis?” Ballard responded, jokingly, that it was because of the tree planting.

Throughout the Infosys negotiations, Chinthala continued to work as a speech pathologist. But in April 2018, he traded that vocation for a new one when IEDC hired him to be senior adviser for India. IEDC employs a number of team members at international offices, including Japan, Germany, Italy and Israel, to increase networking and economic-development opportunities.

Chinthala describes his approach to the job like this: “We all know that government does not create jobs. But government can create an environment for international businesses to come and create the jobs. Also, government can create the environment for local businesses to thrive and create jobs. Ultimately, these are the relationships we create when we build and travel. Building those bridges [is] important.”

So far, he said, his work has helped “build a stronger bridge that has two-way traffic.”

“There’s two lanes now. We’re looking for four lanes or six lanes of traffic, with more businesses going each way. We look at India as a future partner and potential partner, and hopefully we’ll make a Silicon Valley of the Midwest. Maybe we’ll make a hub for Indian companies coming here.”•