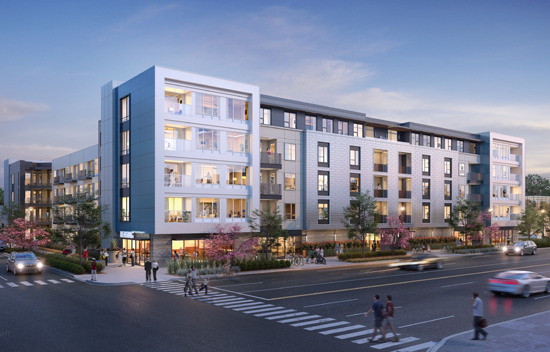 The former Harrison College site downtown is slated for a $30 million apartment project expected to open in 2021.

Indianapolis-based housing developer Milhaus plans to build a 175-unit complex on the property at 550 E. Washington St., next to the existing office building that previously housed Harrison College before it closed in September 2018.

The new project, dubbed The Grid, will also include a 180-space parking garage and an enclosed outdoor courtyard with kitchen and lounge areas.

“We’re being very particular about where we build our projects,” said Brad Vogelsmeier, director of development for Milhaus.

He said the Grid would be about a 10-to-15 minute walk to Monument Circle, Fletcher Place and Mass Ave, which are generally viewed as cultural and culinary hotbeds downtown..

Milhaus acquired the 2.8-acre property from the college in August for $6.3 million. It did so with plans to develop market-rate units similar to another of its projects, directly to the west. Artistry opened in 2013, making it among the first in a recent tidal wave of contemporary apartment complexes on the near-east side of downtown.

The unit prices are not expected to be top-of-market for downtown. They're likely to be comparable to those found at Artistry, which range from $970 for a small studio to $2,926 for a three-bedroom, two-bathroom unit.

Vogelsmeier said the Grid project will include the same microunit concept found at the Artistry; in which 323-square-foot units feature built-in furniture to save room for residents. The Grid also will have one- and two-bedroom units, he said.

The Grid will also feature a resident-only co-working space, a coffee bar, a fitness studio, secure cold-food and delivery storage, and an outdoor “public art component” curated by the Indianapolis Museum of Contemporary Art.

Milhaus is also seeking a tenant for the vacant 50,000-square-foot building formerly occupied by the college, which abruptly left shortly after the property was sold. The property, last updated in the early 2000s, has been vacant since Harrison College left. The Grid will be constructed on what was the college's parking lot.

Vogelsmeier said there will likely be scooter and bicycle parking, in addition to the garage that will be shared between apartment residents and the business that takes over the Harrison College building.

Site prep work already has begun on the project. Construction is expected to start by summertime with first units to be completed by fall of 2020. The project will conclude by early 2021, Vogelsmeier said.