It’s been more than 40 years since downtown nearly lost the Indiana Theatre building to the pages of history and a wrecking ball.

To hear retired architect Jim Kienle tell it, saving the building is what led to the boom in the city’s arts scene.

“There’s nothing else quite like this place in the city, perhaps beyond,” said Kienle, a former historic preservation studio director for Indianapolis-based architecture firm Moody Nolan. “I think it’s fair to say Indianapolis wouldn’t be what it is today without the building.”

The six-story building sheathed in white terra cotta opened in 1927 as a movie palace topped with a ballroom. The theater closed in 1975, and the building was rundown and in disrepair before it underwent an extension renovation to accommodate the Indiana Repertory Theatre’s move from the Athenaeum on Massachusetts Avenue to the building in 1980. 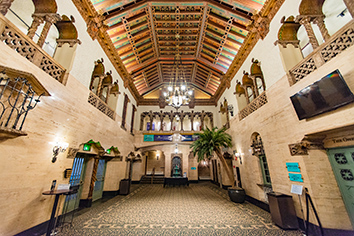 The city and the Indiana Repertory Theatre are making improvements to the interior and exterior of the six-story structure. (IBJ photo/Mickey Shuey)

The city bought the building at that point, originally in partnership with a now-defunct not-for-profit. Under the arrangement, IRT leased the space, and the city paid for building maintenance. By early this century, the landmark was in need of major repairs.

But IRT’s financial position has substantially improved since then. In 2015, it received the largest grant in its history—a $7.5 million award from the Lilly Endowment—and last month it announced an $18.5 million capital campaign.

Through the quiet phase of the campaign, IRT already has lined up $17 million. About two-thirds of the campaign will go into the organization’s endowment.

The city in 2016 committed to $4 million in renovations in return for a 10-year lease extension from IRT under which the theater company agreed to take over responsibility for routine building maintenance. It will forgo making $150,000 annual lease payments and will instead apply that to upkeep. 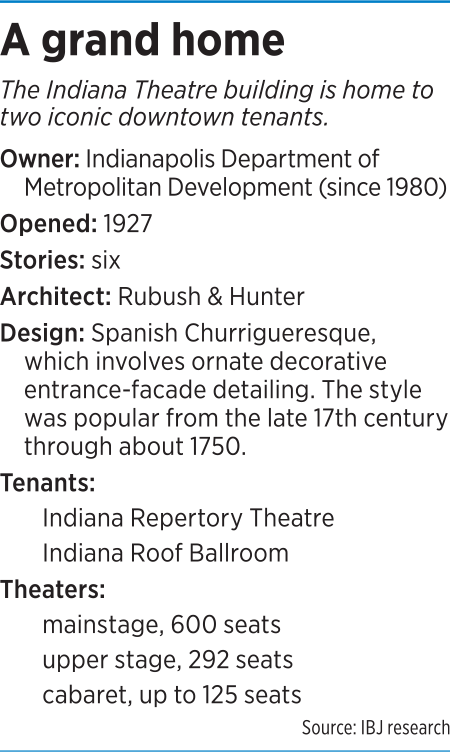 IRT plans to spend about $600,000 from its own campaign to overhaul the fourth-floor, upper-stage theater lobby. Other funds will go toward new lighting, projection and technical equipment throughout its three theaters in the building.

“Technology is changing all the time,” said Jane Robison, general manager for IRT’s artistic operations. “It’s just good business for us, especially artistically, to upgrade that stuff every 10 years or so.”

IRT has the option to buy the building at the end of the lease, though it is unclear whether it will do so.

The theater company rents floors one through four. The fifth and sixth floors are leased separately to the for-profit operator of the majestic Indiana Roof Ballroom. The 15,700-square-foot space has retained its original, 1920s design, taking inspiration from a Spanish town plaza.

That space hasn’t had a full renovation since 1986. But it has continued to undergo maintenance and upgrades in lighting and technical elements over the past several decades, said Antonia Zunarelli, sales manager for the space.

“It’s an ongoing labor of love, if you will,” she said. “We are very mindful of the types of events we host here because of the nature of the building. … It serves the community, and we want it to remain as beautiful as possible.” 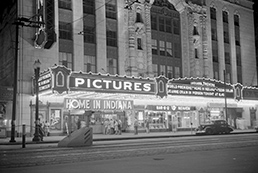 The 3,200-seat Indiana Theatre hosted the world premiere of “Home in Indiana” in 1944. The theater was in disrepair by the time it closed in 1975. (Photo courtesy of Indiana Historical Society, Larry Foster Collection)

The city-funded building renovations, which began in late 2016, are close to wrapping up. They include a new roof, new HVAC systems, tuck-point work on the building’s exterior and overhaul of the elevators.

The IRT and Indiana Roof each is responsible for upgrades within its own spaces.

“It’s hard to go into that building and not be in awe,” said Emily Mack, director of the city’s Department of Metropolitan Development. “This building is an architectural and cultural gem, and I think its best days are absolutely ahead of it.”

The IRT and Indiana Roof each are responsible for upgrades to their own spaces.

The Indiana Theatre building was designed by Rubush & Hunter, one of the city’s top architectural firms in the early 20th century. Other prominent Rubush & Hunter buildings include the Columbia Club and the Circle Tower.

“The architecture on the outside of the building is really unique for downtown,” said Eric Rowland, chief architect for Rowland Design. He said he doesn’t know of another building in Indianapolis with “that level of terra cotta work and quality.”

The transformation of the 3,200-seat movie theater into a 600-seat venue with a stage for live performances was no small feat. 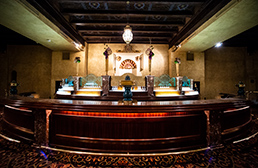 The design of the Indiana Roof Ballroom on the sixth floor was inspired by a Spanish town plaza. (IBJ photo/Mickey Shuey)

Some of the areas behind the main stage have been covered up or are just out of sight of event-goers, but many elements remain—even the old organ pipes stage left. Throughout the building, you can see staircases that lead to no-longer-used balconies.

Other original uses that have been eliminated include a barbershop, bowling alley and lunch counter.

The building has been on the National Register of Historic Places since 1979. It is among several dozen buildings that are part of the city’s Monument Circle Historic District.

Among them is Hilbert Circle Theatre, another Rubush & Hunter building, which opened in 1916 as a movie palace with 2,700 seats. Buoyed by that theater’s success, Circle Theatre’s owners decided to build the even larger Indiana Theatre.

Rowland said the European design of the building was done in a manner that sought to “transport people to another place” when they walked inside, or even saw the building from the street.

“I hope people are always intrigued by it,” he said.

IRT’s board of directors briefly discussed—in 2015 and 2016—the idea of finding a new space, amid discussions about whether the theater would sign a long-term lease.

Instead, IRT opted to stay and embrace the history of the building while also pursuing ways to modernize theater spaces.

IRT features three theaters—the 600-seat main stage; the fourth-floor, 292-seat upper stage; and a cabaret, which often hosts young children’s groups and families. It’s on the third floor and occupies what was the upper third of the movie theater. The ornate, gold-trim roof and elaborate artwork along the walls are all original to the space.

The upper-stage theater—which features a three-quarters, thrust stage—often hosts edgy, experimental theater. But the theater lobby hasn’t seen extensive improvements since at least the 1990s and doesn’t exude a contemporary vibe. It’s home to a massive statue that will be moved to the cabaret space and incorporated into a new seating area.

“This [upper level] lobby does not represent who we are anymore,” said Suzanne Sweeney, IRT managing director. “We have renovated parts of the theater multiple times … but not this area.”

Lobby updates are expected to include rearranged gathering spaces, seating areas with updated furniture, refreshed colors and carpeting, a reconfigured bar area, and renovated bathrooms with more stalls—all at a cost of about $600,000, Sweeney said.

“You don’t want to create faux history,” he said. “You want to retain what’s original and historic, and then contrast it with something that’s new.”

He said it would “diminish the original historic fabric” to try to match the upper-stage theater lobby, which was built after IRT moved in, with the architecture of the mainstage and lobby. Those areas have maintained the elegance and sophistication of the original theater.

Sweeney said IRT is fortunate to have its home in such an iconic building.

“We believe in this building. It’s one of the gems of Indianapolis,” she said. “We were downtown before downtown was cool … being in the center of it all matters to us. We believe that this is the right place for us.”•