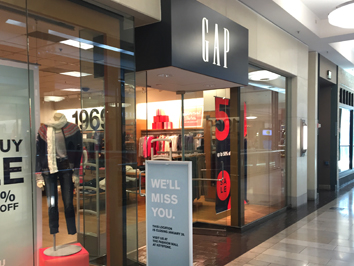 In a move some analysts think should have happened long ago, Gap Inc. is spinning off the best part of its business—Old Navy. The market liked the news, sending shares soaring more than 28 percent in aftermarket trading on Thursday.

The retailer said Thursday that it's creating two independent publicly traded companies—low-priced juggernaut Old Navy and a yet-to-be named company, which will consist of the iconic Gap brand, Athleta, Banana Republic as well as the lesser known names Intermix and Hill City.

The company also said that it will be closing 230 Gap brand stores over the next two years that account for about $625 million in sales. A year ago, the Gap brand had 725 stores worldwide. After the closures, which also include the 68 stores it shut down over the past year, the chain will be down to roughly 427 stores. It expects to have more than 40 percent of Gap's business coming from online sales after the restructuring.

The unnamed company will have annual revenue of about $9 billion, compared to Old Navy’s $8 billion, the company said.

Analysts called the split a smart one—and one the struggling parent company should have considered long ago.

“It’s absolutely long overdue. I’m stunned it hadn’t happened already. How much more can the strength of Old Navy prop up the rest of the business?” said Wendy Liebmann, chief executive of WSL Strategic Retail. “It’s almost as if they used Old Navy as a smokescreen to hide the absolute urgency to do some fundamental things with the other businesses.”

The Gap brand has struggled as part of a broader slump for brick and mortar retailers, even as the lower-priced Old Navy brand has resonated with discount shoppers. In the latest quarter—the critical holiday period—Old Navy’s same-store sales were flat, while Gap and Banana Republic sales were both negative.

Art Peck, who’s been leading parent company Gap, said the company doesn’t know the exact number of job losses from the planned store closures but will try to minimize the number.

Peck said that he expects both companies will be strong enough as standalone entities to manage the large supply chains and relationships that keep them running.

“Let’s remember these are both $8 and $9 billion companies, so it’s not like they’re small,” Peck said in an interview Thursday. He said both of the companies are “substantially larger by a multiple of many of their competitors.”

Gap’s struggles have been brewing for some time, from declining mall traffic to operational issues. One of the most famous missteps came in 2010 when the company unveiled a new Gap logo. Some shoppers complained, so it ditched it just a week later.

There’s also been a sense that the Gap brand lost its fashion sense, falling out touch with its core customers. The three largest brands were meant to complement each other, with Old Navy pulling in families with discounts, Gap resonating with high school and college students and Banana Republic a go-to for young professionals. The model has frayed in recent years, with the Gap brand under increasing pressure amid complaints about its clothes and messy stores.

“I would invest in the Old Navy spin. I’m not so sure on NewCo; that’s still going to take some time,” said Jennifer Redding, Wedbush Securities analyst. “I don’t think this is the magic bullet but it’s positive. There’s still work to do.”

Peck will stay in charge at the new company. Peck has been there most of the way, first taking charge of the Gap brand in North America in 2011.

“Maybe the board just said, ‘What we need to do is stabilize the remainder of the company before we think about a new person at the head,’” Liebmann said of Peck retaining his role. “Gap is not Gap, the brand is not relevant anymore. Look at the store windows, it’s all incredibly generic.”

Sonia Syngal, now CEO of Old Navy, will keep leading Old Navy when it becomes a standalone company. The transaction is expected to be completed in 2020, if it gets approval.

“They weren’t getting any value for Old Navy. They are making the right decision,” said Poonam Goyal, an analyst with Bloomberg Intelligence. “It makes so much sense.”