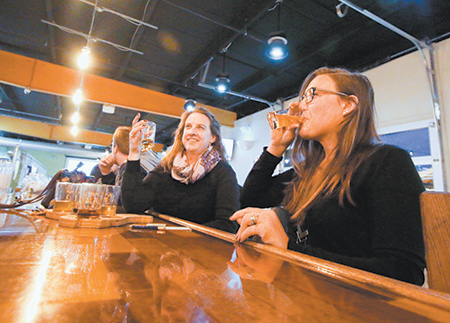 Metazoa Brewing Co., which opened as a craft brewery and taproom in downtown Indianapolis in 2016, plans to add another taproom in Broad Ripple.

“The plan is to have a second Metazoa location and have all the same beers that are offered downtown, but just reach a new market,” said Sales and Marketing Director Lauren Frederick.

The new taproom, which aims to open in early 2020, will be built on a site between College and Carrolton avenues along the canal, just east of a Fresh Thyme grocery store and The Coil apartment building at 6301 N. College Ave.

The previous address of the 0.19-acre parcel is 804 E. Laverock Road, although that street no longer exists and the property has not yet been assigned new address.

The Broad Ripple site has been vacant for some time, Frederick said. Its most previous occupant was a retail business called Get Organized. A vacant building on the site will be torn down so Metazoa can build its taproom.

Metazoa expects the taproom to occupy about 8,000 square feet, Frederick said. Exact figures and costs haven't been finalized because Metazoa is still going through the planning and approvals process. “We’re just in really early stages,” she said.

Metazoa bills itself as an animal-friendly business—it donates 5 percent of its profits to animal- and wildlife-related organizations, and some of its beers have animal-inspired names. Metazoa’s current lineup of beers, for instance, includes the stouts Bonobo Brew, Kitten Slumber Party and Puppy Slumber Party.

Metazoa also has a dog park in the works at its South College Avenue facility. The facility also offers monthly Bunny Yoga classes in which participants can pay to take a yoga class and interact with adoptable rabbits.

The Broad Ripple site will not include a dog park, Frederick said, but like its downtown counterpart it will welcome pets.

Because the facilities allow pets, Metazoa is not allowed to serve food. It encourages customer to bring in or order their own food or visit food trucks that periodically visit.