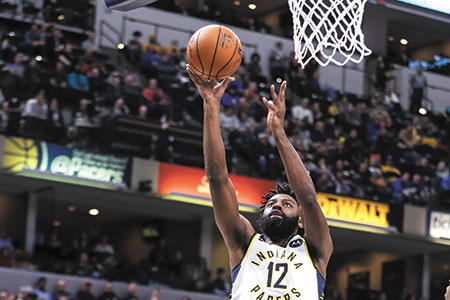 The Indiana Pacers have racked up increases in ticket sales and TV ratings this year, overcoming fears that superstar Victor Oladipo’s season-ending leg injury in January would deflate interest in the team.

Boosted by the fifth-highest winning record in the 30-team NBA, the Pacers have seen home attendance rise 4.6 percent and TV ratings climb 6 percent, compared with this time last year.

In fact, the franchise is enjoying its best TV ratings since the 2013-2014 season, when the team reached the conference finals before losing to the Miami Heat. The season’s Nielsen rating of 3.7 is the second-highest in a decade.

“This is a really fun and exciting team, and the fans and this city have embraced the club big-time,” said Jack Donovan, general manager of Fox Sports Indiana. “That’s carried over to television and we’re on track to have another really strong year.”

The ratings rank the Pacers broadcasts fifth among regional sports networks that broadcast NBA games. The average attendance ranks the Pacers 22nd in the league, about where the team has hovered over the last decade. 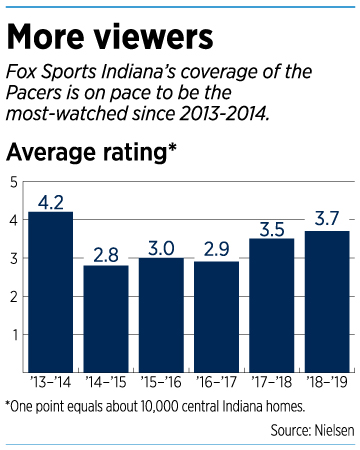 The Pacers enter the final stretch of the regular season with the fourth playoff seed in the Eastern Conference, with a chance to move up or down as they face some of the league’s best teams. Of the 13 games over the next month, all but one are against teams locked into the postseason or in the playoff hunt.

Donovan said ratings were flat after Oladipo’s injury but are likely to spike as a result of upcoming marquee matchups. The Pacers will play at Golden State on March 21, at Oklahoma City on March 27, and at Boston on March 29, before hosting Boston on April 5.

With a 3.7 rating, Fox Sports Indiana’s Pacers games have consistently been No. 3 in prime time in central Indiana since the start of the season, trailing only the NBC affiliate, WTHR-TV Channel 13 (5.6 average rating), and the CBS affiliate, WTTV-TV Channel 4 (5.0).

The 3.7 rating means about 37,000 households (3.7 percent of central Indiana households) on average tune in for Fox Sports Indiana’s Pacers games—though that doesn’t factor in the growing number of viewers who watch on digital devices, or at restaurants, bars and other businesses.

While Fox Sports tracks the number of users who watch on digital platforms, the company doesn’t share the figures.

Donovan said the TV landscape is changing dramatically, with such digital services as Hulu, Sling and YouTube giving people a dizzying array of viewing options. But Pacers’ ratings have nonetheless proved resilient, actually rising a few tenths of a point each year for several years.

“Even though you have all these choices, our ratings are actually up, which runs contrary to most television shows and networks,” Donovan said.

The digital transformation also creates an opportunity for Fox Sports Indiana to reach Pacers fans outside the market who have limited access to local broadcasts, said Larry DeGaris, a sports marketing professor at University of Indianapolis.

“Essentially, it’s a three-hour infomercial for the team,” Donovan said. “Television, we think, definitely cultivates fans who then buy tickets and buy merchandise and everything else.”

Larger-market teams have an advantage in filling their arenas, though some smaller-market franchises—the Portland Trail Blazers, Utah Jazz and Milwaukee Bucks—have sold out all their home games this year.

All NBA teams now use dynamic ticket pricing, which takes into account a variety of factors, from the day of the week to the drawing power of the opponent. 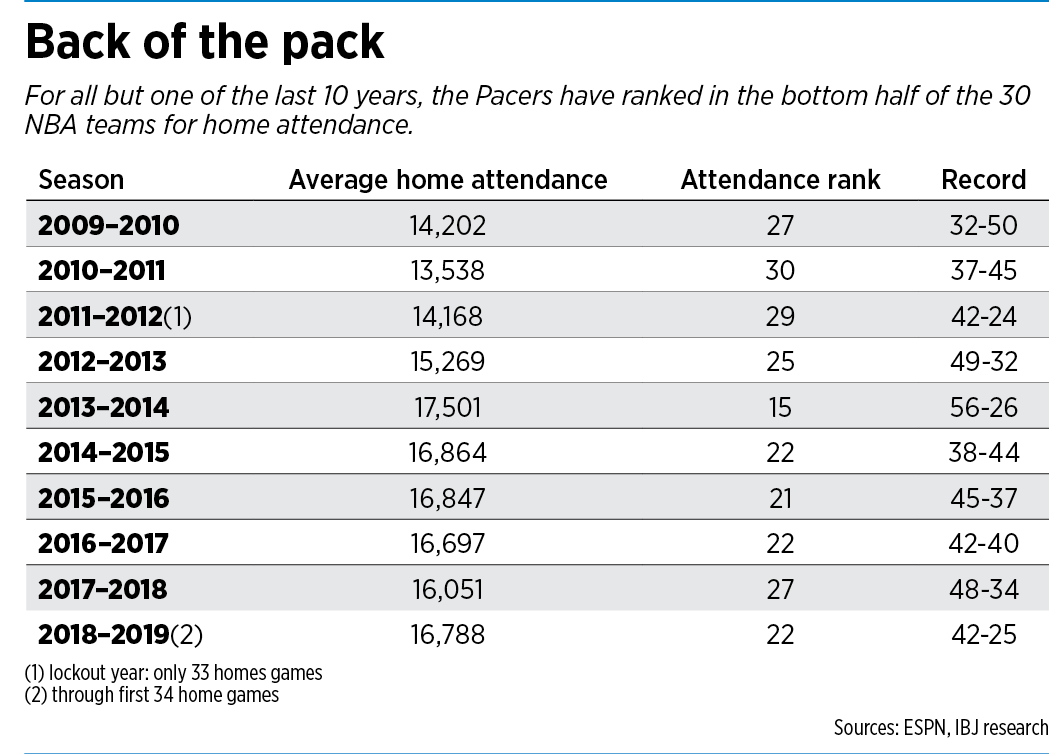 Taylor said most of the remaining regular-season games likely will have similar pricing, given the high caliber of the opponents, including Detroit and Boston.

On the other end of the spectrum, demand was slack for the March 12 home game against the New York Knicks, whose record, 13-55, is the worst in the NBA. The Pacers won 103-97. Carmel-based FanFare was selling upper-level tickets for $7.

He said Oladipo’s loss hurt Pacers ticket resale values, though they have partly bounced back. Another negative is that the team has only two weekend home games the rest of the way.

The Pacers’ game on Saturday, March 2, against the Orlando Magic (who are competing for a spot in the playoffs), was the most recent home sellout.

Harrison said the fact that the Pacers are contenders in the Eastern Conference “certainly plays a role” in the heightened fan interest this season.

The team’s impressive showing against a LeBron James-led Cleveland Cavaliers team in the first round of the playoffs also had an impact on sales.

“The playoffs made last year’s resale market exciting and there was much more demand … than we anticipated,” he said.

“That carried over into this year—we just hope it continues for the rest of this season.”•