Home » Fever, summer events would get boxed out by $360M Fieldhouse project 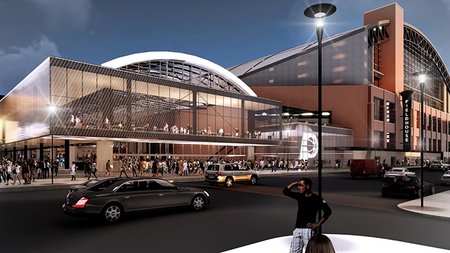 The original proposal for updates to Bankers Life Fieldhouse.

The $360 million overhaul of Bankers Life Fieldhouse approved Friday by the Marion County Capital Improvement Board will render the arena unusable for large swaths of time between 2020 and 2022, forcing the Indiana Fever to find another venue for the better part of three seasons.

It also will nix the fieldhouse as an option for concerts and other large gatherings during the periods of intensive construction—in particular during the summers.

However, the construction schedule works around the Indiana Pacers’ home games and will allow the fieldhouse to host the 2021 NBA All-Star Game, Feb. 12-14, without interference.

The project has been broken up into three phases from early 2020 to late 2022. It will include extensive renovations to the interior of the fieldhouse and the creation of a splashy outdoor entry plaza to the north of the fieldhouse at 125 S. Pennsylvania St.

Here’s a rough outline of the schedule:

— Phase 2 includes an entry pavilion expansion and exterior construction along with additional interior renovations, which will take place after the 2021 NBA All-Star Game until Dec. 31, 2021. The building will be closed for events from the end of the Pacers 2020-2021 season through Oct. 1, 2021.

— Phase 3 construction will take place between Jan. 1 and Oct. 1, 2022, to complete the entry pavilion expansion, exterior plaza and remaining interior renovations. The building will be closed for approximately 60 days in the summer of 2022.

The CIB and the city will pay for the bulk of the fieldhouse renovation and expansion project—$295 million—with Pacers Sports & Entertainment kicking in $65 million.

Combined with additional spending on technology, maintenance and general operating expenses, the deal could cost the CIB—a quasi-government agency representing the city—nearly $800 million over the life of the 25-year deal. It's contingent on legislative approval of a bill that would shift millions in state tax revenue to the CIB.

Fever seasons take place largely during the summer months. Accordingly, the team's home games must be played elsewhere during the 2020 and 2021 seasons and part of the 2022 season, according to PSE.

Officials say they are still evaluating options for a temporary home venue and declined to identify specific candidates.

Among the likely venues are the Indiana State Fairgrounds Coliseum—although it hosts Indy Fuel games through the summer, potentially creating scheduling conflicts—and Hinkle Fieldhouse on the Butler University campus.

The Fever in 2018 drew average crowds of just under 7,500 people. Hinkle Fieldhouse can seat 9,100, while the Coliseum seats about 6,800. There are also several large high school gymnasiums in central Indiana, although it’s unclear whether any would be willing to accommodate the professional women’s basketball team.

While a large portion of the construction won’t be completed in time for the 2021 All-Star Game, PSE President Rick Fuson said the NBA is satisfied with the plans for the arena overall.

He said the interior renovations planned in the first phase—including new gathering spaces and lounge areas—will make “it a better experience” for the fans who attend the weekend-long event.

The fieldhouse also will be off-limits to large-scale events during summer construction periods.

This year the venue is hosting at least 44 events, not including Pacers playoff games, between the start of April and end of September. This includes several big-name concerts and a handful of convention-type events and seminars.

Visit Indy, which helps program convention events at the fieldhouse, has no major events booked for the venue during the closure periods, Vice President Chris Gahl told IBJ.

In lieu of summertime programming, Fuson said it’s likely the venue will look to host more concerts and big-ticket events during the spring, fall and winter months, although that would likely put strain on event and venue staff.

He said many of those events may also find homes at other area venues, such as White River State Park, the Fairgrounds or the Ruoff Home Mortgage Music Center in Noblesville.

A 2017 study by the Indiana University Public Policy Institute found visitors spend more than $31.3 million each year on lodging and outside dining for non-Pacers events hosted at Bankers Life Fieldhouse.

That doesn’t consider the money generated from ticket sales and concessions for those Fieldhouse events, potentially putting a dent in PS&E’s bottom line if it’s missing out on dozens of concerts and events during the summer.