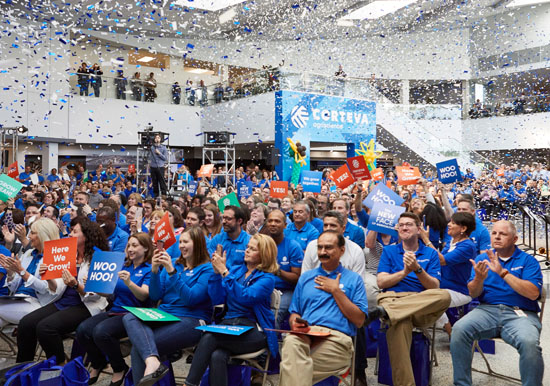 As DowDuPont Inc. splits into three independent chemical makers, CEO Ed Breen is urging patience to investors who might be frustrated by their shares' shrinking value.

DowDuPont on Saturday spun out the Corteva Inc. agriculture business, leaving behind a reborn DuPont. Hundreds of employees at the Corteva Agriscience Global Business Center in Indianapolis on Monday celebrated the official launch of the company and the first trading of its common stock on the New York Stock Exchange under the ticker symbol CTVA.

Shares of Corteva were down 8 percent at midday, to $24.79 each. Analysts have been downplaying expectations for the spinoff stocks.

With several economic trends working against DowDuPont, the combined companies' stock has lost $57 billion since the September 2017 merger that created the large company.

Although all the businesses have been streamlined and are better managed on "every metric,'' it might be years before investors see the valuation growth they've been promised, Breen said last week at the Bernstein Strategic Decisions Conference.

“I’m a long-term thinker. I’m thinking, how will this thing look in five to seven years?” Breen said. “I will hold the stock of all three companies.''

“We have some macro issues right now,” he said. “This too shall pass.”

The current market value of DowDuPont, added to Dow Chemical Co., which was spun off in April, is $106 billion, compared with a value of $162 billion in September 2017 when Dow Chemical Co. and DuPont Co. completed their merger of equals.

Shares have been hurt mostly because of the U.S. trade war with China, Breen said. Also, lower product prices are compressing margins at Dow, while adverse weather is hurting the Corteva agriculture business, he said.

Those challenges appear to be hitting DowDuPont particularly hard. The shares have declined 31% through Wednesday since the merger, compared with a 4% decline in the S&P 500 materials index.

"Each one of these, you can see it’s run so much better than it was run, and you will get the value out of it,” said Breen, who will be executive chairman of the new DuPont.

He plans to study whether more value can be realized at DuPont by selling off businesses or through more spinoffs. He has already earmarked $2 billion of assets for possible sale.