The linchpin of several unrelated Indianapolis redevelopment projects—the new downtown Phoenix Theatre, the restoration at the PR Mallory campus, the transformation of the old U.S. Naval Armory into a charter high school—is a complicated, obscure and yet powerful federal tax credit that could soon yield more results in Indianapolis.

The city is set to receive its third allotment in 20 years of New Markets Tax Credits from the U.S. Department of the Treasury, gaining $55 million more in tax credits that it can exchange for cash to finance high-impact projects in certain low-income or distressed areas. Investors use the credits to cut their federal tax liability, reducing the financial risk of the projects.

“This far surpassed my expectations of what we might have been awarded,” said Emily Mack, director of the city’s Department of Metropolitan Development. Of more than $14 billion in requests in the latest round of funding, the federal government awarded just $3.5 billion in tax credit authority to 73 entities nationwide, most of them national- or state-focused.

City officials have been tight-lipped about which projects they might fund. But neighborhood leaders, armed with ideas, say they are eager to pitch the possibilities.

Bob Rapoza is a spokesman for the New Markets Tax Credit Coalition and said Indianapolis “ought to be very happy” to have received such a large allocation. In this round, only a third of applicants were successful.

Rapoza’s Washington, D.C.-based advocacy group is lobbying to extend the credit program, which is due to expire this year.

“It’s very competitive,” Rapoza said. “They have to have a good track record. A big part of the [scoring] is whether they have done what they said they would do” in the past.

The city has deployed money from previous allocations of New Markets Tax Credits to fund several prominent projects: In 2010, it used $32 million from its tax credit allocation to fund the Ivy Tech Corporate College and Culinary Arts Training Center on North Meridian Street and the Avondale Meadows Health and Wellness Center.

“Those are signature projects,” said Deputy Mayor Jeff Bennett, “and that’s the whole point of the tool.”

This time around, it’s unclear—at least so far—which projects the city will use the tax credits for. Mayor Hogsett’s administration on June 10 released a request for proposals memo, seeking submissions by July 10 that “demonstrate strong community impact in underserved neighborhoods that will help revitalize the area and produce benefits for low-income persons and residents of low-income communities.”

A separate legal entity, Indianapolis Redevelopment CDE LLC, will vet the projects and ultimately select which ones receive funding. The entity, formed in 2009, has a 14-member board of managers.

“Our first steps right now are to go back through our pipeline and see which projects are still real projects,” Bennett said.

“It’s really too early to say. While we have projects that went into our application as part of our pipeline, we’re getting stuff coming in now almost every day that might supersede the ones in the pipeline.”

For instance, restoring the distressed Rivoli Theatre on the near-east side has been on the city’s to-do list for a long time, but Bennett said the project “is nowhere near ready to go.”

Eventually, Bennett said, using the credits on the Rivoli “could be compelling.”

City officials said they included several other potential projects in the 2018 application, but they declined to reveal most of the details.

Bennett said the board likely will choose a broad range of project types.

“The mix is important,” he said. Last time “we didn’t just use all the credits to do one type of projects. The populations served, the neighborhoods served, those differences give us compelling stories to tell.”

This time, the city plans to again invest about $10 million in its Grow Indianapolis Fund, which awards small business loans ranging from $250,000 to $2 million.

Mack said using New Markets Tax Credits to invest in small businesses is a relatively new concept, one she said is “another way to be innovative.”

The city has two years to close on projects, meaning they likely won’t be chosen or announced all at one time.

Projects have to meet a complicated set of criteria to be eligible: They have to be located in high-poverty or low-income census tracts and must cost at least $5 million, with 80% of the financing lined up.

“It becomes a bit of a beauty contest,” Bennett said. “What do investors want to fund? What is shovel-ready and financially viable? What can you get out of the door in your two-year window? Those things have to come together.”

Investors—which are often financial institutions, although they can be other types of companies or individuals—provide equity in the form of cash to the CDE in return for a tax benefit: a reduction in their federal income tax liability over seven years by an amount equal to 39% of their investment.

That means a bank, for example, that puts $1 million into a project can reduce its federal income tax liability by a total of $390,000 over that seven-year period.

The CDE then uses the cash from investors to help businesses in distressed areas with approved projects.

“With these capital investments, CDEs can make loans and investments to businesses operating in distressed areas that have better rates and terms and more flexible features than the market,” according to the U.S. Treasury, which helps to “offset the perceived or real risk of investing in distressed and low-income communities.

In the previous 15 rounds of credits, the fund has made about 1,200 awards totaling $57.5 billion in tax credit authority.

The program is said to generate more than $8 in private investment for every $1 invested by the federal government.

Nationwide, the credits are typically used to build health care and community health facilities as well as manufacturing and industrial facilities. A smaller number of arts, culture and mixed-use buildings have been constructed using the tool, according to Rapoza.

New Markets Tax Credits are meant to provide gap financing, meaning that they only fund portions of projects, not projects in their entirety. 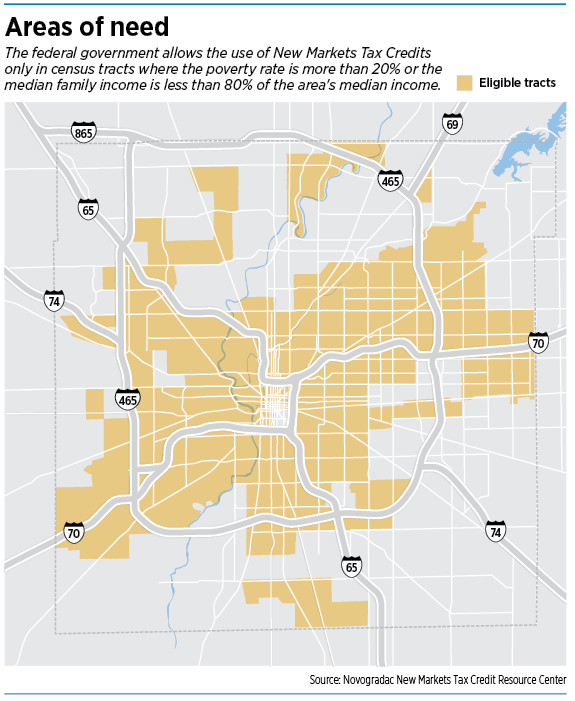 “They’re certainly a complicated tool to deploy, but a powerful one,” said Joe Bowling, director of the Englewood Community Development Corp., which is a part owner of the P.R. Mallory building. “The New Markets funds are a kind of linchpin to a lot of development where the project may not work financially without a little extra boost, especially, as the name implies, in markets that are underserved in some ways.”

Derrick Stewart, CEO of the YMCA of Greater Indianapolis, said projects in poor census tracts that would otherwise not be economically viable become “very viable, very quickly” using the equity.

The equity from the investors is typically combined with an interest-only loan during the seven-year period, which is either fully repaid by the end of the term or eventually refinanced into a longer-term repayment structure.

For example, Bill Simmons, artistic director for the Phoenix Theatre, said the Phoenix is tasked with raising $300,000 per year above operating costs to pay down a loan over the next seven years.

“It’s tough to be operating a new facility and also be raising money to adequately fund the New Markets Tax Credit,” Simmons said. “I don’t think it’s a secret that we’re continuing to look for a major donor who might want to put their name on the building or find a corporate partner.”

However, Simmons said the tax credits have been “instrumental” in making the project happen.

“What it has done is allowed us to get into the new facility and grow into our new home,” Simmons said. “It’s given us time to begin plans for another large sustainability campaign.”

John Watson, CEO of Core Redevelopment and board chair of Indianapolis Classical Schools, has been a real estate developer for 25 years. He told IBJ the deal to make the Riverside High School project happen using New Markets Tax Credits is “the most complicated financing deal I’ve ever done, by far.”

“It’s a long and painful process but it’s the only way [such projects] get done,” Watson said. “What they allow is for projects that are important locally to be undertaken, rather than some federal program that isn’t necessarily emphasizing locally important projects,” Watson said. “It’s an effective tool in getting the decision-making to the local level.”

Kevin Honigford, the chief financial officer of the Ivy Tech Foundation, agreed, calling the culinary center deal the most complicated transaction in his 30 years of experience. He encouraged applicants to go in eyes wide open.

“Don’t be scared off, but along the same lines, don’t underestimate the time and energy that will be required to do it,” Honigford said. “Make sure you’re ready to take it on and make it happen.”•