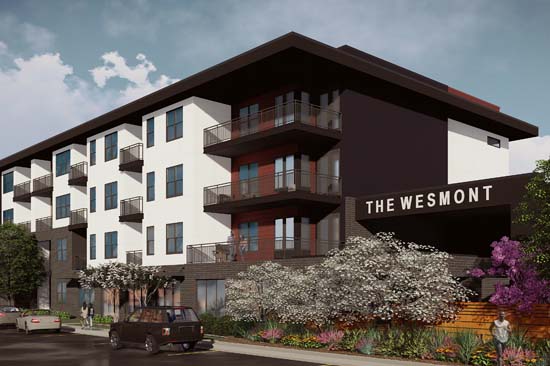 A local developer wants a 10-year tax break on a 188-unit apartment complex it plans to build on a former Indianapolis Public Schools site along East 16th Street.

TWG Development Inc. plans to spend $26 million on the apartment project, which is part of its larger redevelopment project south of East 16th Street and immediately east of the Monon Trail. The complex will be named Wesmont, after Indianapolis native and jazz guitar legend Wes Montgomery.

TWG is seeking the tax abatement specifically for the construction of the apartment units, most of which will be reserved for people with incomes less than or equal to the area's median income. The Indianapolis Metropolitan Development Commission is expected to consider the request during its meeting Wednesday afternoon.

The company bought the land—bounded by Yandes Street to the east and Interstate 70 to the south—from the school district in March for $2.75 million, following a months-long bid process.
The total project cost is $30 million, which includes revamping an existing building along East 16th Street as leased office space—a large portion of which will house local tech firm Lessonly.

The Wesmont is envisioned as a four-story, U-shaped apartment building on the south portion of the property. The complex would also have 5,000 square feet of amenity space including bicycle parking, a fitness center, a community lounge, a business center and a sun deck with a pool. The entire redevelopment project will include 225 parking spaces.

The development will be owned by TWG Polk LLC, a subsidiary that pays homage to the Polk Sanitary Milk Co. that operated on the site until 1950. IPS acquired the property in 1967, demolishing most of the structures on the site.

TWG's current site plan is scaled-down from its original proposal, which included 268 apartments along with single-family units that would be marketed to teachers and other public servants. That plan was the one selected by IPS that led TWG to take ownership of the site.

The 188 units would break down as follows:

— 19 one-bedroom units for renters earning 60% of the area’s median income;

— 19 one-bedroom units for renters earning 80% of the area's median income;

— and 19 two-bedroom units at market-rate.

Department of Metropolitan Development staff is recommending approval for the tax abatement for the apartment project, which would save the company more than $1.4 million over 10 years.

Curry said the tax abatement is an “integral part of this project” and that the project would likely be scaled down if the company’s request was unsuccessful.

The company plans to own the Wesmont for at least 10 years after its completion, a standard practice for TWG. The firm's in-house architecture team is working with Birmingham, Alabama-based firm Fifth Dimension on the project. TWG will also be the project’s general contractor.

The site is adjacent to an unrelated, $5.5 million townhouse development by Onyx+East along the east side of Yandes Street.