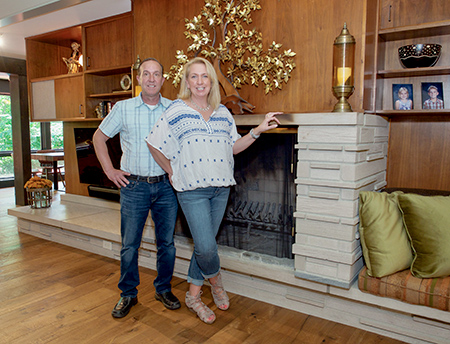 When Steve Gray, home renovator and president of Steve Gray Renovations, first set eyes on the midcentury modern house in which he and his family have lived the past two decades, he was immediately intrigued.

His wife, not so much.

“It was a dreary day, and everything indoors was painted tan,” Deanna Gray, office manager for Steve Gray Renovations, recalled. “The pool in the back yard was nice, but I didn’t have any kind of vision for it.” 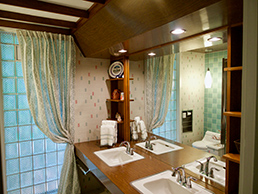 The home’s master bath is original to its 1959 construction, but the Grays say it functions well. (IBJ photo/Daniel Axler)

Steve, on the other hand, had vision to spare. And the house itself certainly offered an interesting backstory. Situated on a wooded, 1.25-acre lot, it began life as the centerpiece of the 1959 Indianapolis Home Show at the Indiana State Fairgrounds. It was the brainchild of the Indianapolis Chapter of the Indiana Society of Architects, which spent a great deal of time designing “what they felt was the perfect house for contemporary Hoosier living.”

The 3,200-square-foot home was moved to its current location after the show. It features a brick exterior, a main floor with a walkout basement, a rear wall composed almost entirely of windows, and a swimming pool. 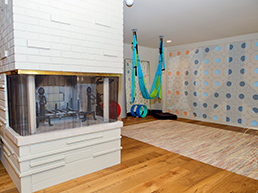 The Grays first visited the place in October 2000, and moved there two months later. But they didn’t instantly launch a remodeling campaign. With two young children and a business to run, they had other things on their docket. Their early work was confined to fresh paint, new carpeting and electrical updates.

“We went 10 or 12 years just doing work on the house that needed to be done,” Steve said. “We didn’t have a full vision of its potential. But as the kids got older, we were able to put more time into it.”

About a year and a half ago, the couple spent six months updating the first floor. It contains the master suite, two other bedrooms and a vast area with a dining room, kitchen and living room. Problem was, it wasn’t nearly open enough.

“Everything was compartmentalized,” Steve said. “The dining room was in a room with a door. The galley-style kitchen had doors. We found a way to open it up and give the feel of a big, midcentury modern project.” 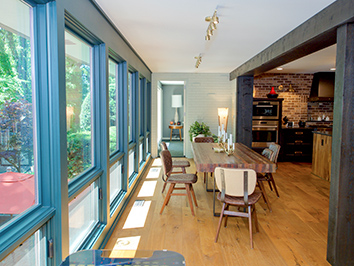 The home’s rear wall offers a bank of windows that looks out to a pool. (IBJ photo/Daniel Axler)

Today, the couple said with pride, one can look in the front door and see all the way through to the home’s windowed backside. And Deanna said that standing in the kitchen, with its free visual access to the wooded back yard, feels like “standing in a treehouse.”

The couple also took the opportunity to upgrade and rationalize the first-floor decor, including the floor coverings—of which, before the renovation, there were no fewer than five. Now, however, pretty much the entire first floor is surfaced with an engineered, antique-white, planked-oak product.

“We wanted materials where, if you got dog hair on them, you wouldn’t notice,” Steve said. “And if you dropped something on the floor and dented it, it just gave it character.”

“And we wanted to make sure the remodeled kitchen didn’t have a shiny ‘new’ look to it,” Deanna added. “I think it’s really hard to tell what’s from 1959 and what’s new. We did a good job of intermixing things.”

The same could be said of the home’s furnishings—a grab bag of items that all hearken back to the glory days of the 1950s and ’60s. The centerpiece is the living room’s gigantic Indiana limestone fireplace, equipped with a battery of mahogany cabinets. There’s even space for two massive speakers, which were part of the home’s original hi-fi system. 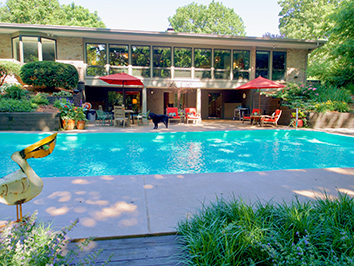 The home features a lower level that includes home office spaces, a bar and media room and opens out to a pool. (IBJ photo/Daniel Axler)

“Some of the items we actually found at Goodwill,” Deanna said. “We found some great chairs there and just had them recovered. Some items are new. To me, that’s one of my favorite things about the house—the mix of old and new, formal and casual.”

The next project was revamping the home’s lower level. The changes included expanding the couple’s home office spaces, reconfiguring the bar and media area, and adding a yoga room.

“I’m able to watch TV in the evening and get a game plan for the following day,” Steve said. “That’s where I relax in the evening.”

About the only project left is redoing the backyard landscaping—and the master bath. The bathroom delay is mostly because, even after more than 60 years of use, the room continues to fulfill its functions admirably.

“Our bath is original to 1959, and we use it to this day,” Steve said. “There’s a lot to be said for the quality of products back then.”•