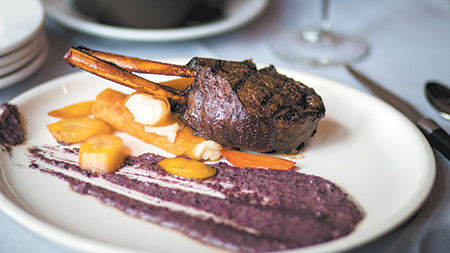 For the second time in less than three years, restaurateur Gary Brackett is forming a new business strategy for the downtown space he leases at 14 E. Washington St.

CharBlue Steak & Seafood, a restaurant and bar operated at the site since late 2016 by Brackett Restaurant Group, shut down June 29.

Jeremiah Hamman, who co-owns the eatery with Brackett, said the owners are working to reopen the 5,600-square-foot space as an event facility.

“CharBlue is much better off as a venue for large-scale events and happenings,” Hamman said. “We are working with the landlord to tailor the space to become an event venue rather than a daily restaurant, as that was such a large segment of our dining to begin with.”

Georgia Reese’s operated in the space for about a year and a half before making way for CharBlue.

CharBlue had hoped to differentiate itself from at least 10 other steakhouses in downtown Indianapolis by offering a rotating menu and unique dishes.

Stacked Pickle has eight locations in the Indianapolis area and one in Lafayette.