Home » Downtown Georgia Reese’s to be replaced with new steakhouse 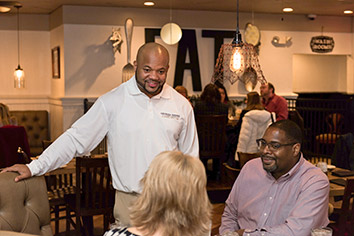 Restaurateur Gary Brackett plans to replace his Georgia Reese's Southern Table & Bar in downtown Indianapolis with a steakhouse called CharBlue by the end of the year, he announced Monday.

Bracket said he hasn’t been able to fully realize the upscale-soul-food and live-jazz concept in the downtown location because of lease issues.

“The live music that has entertained the crowds had to be shut down due to noise ordinances in the lease,” Brackett Restaurant Group said in a written statement.

The 6,800-square-foot 86th Street eatery closed in March. At the time, Brackett said the location proved too large to be financially successful.

The 5,600-square-foot downtown restaurant will continue to operate as Georgia Reese’s until it makes the transition to CharBlue late this year, Brackett said.

Brackett said he is partnering with local restaurateur Jeremiah Hamman on CharBlue. Hamman was operator of Mo’s A Place for Steaks and Detour: An American Grill

CharBlu will face tough competition in the steak category downtown, where at least 10 other steakhouses are open within blocks.

The owners said they plans to differentiate CharBlue from traditional steakhouses.

“With local products, farm-to-table menu items and a seasonally rotated menu, [CharBlue] will seek to create something different than Indy’s steak restaurants.” Brackett said. “Hatfield is charged with filling out the rest of the menu with dishes that innovate and change people's perception of traditional steakhouse dining.”