Home » After years of being the ‘it’ neutral, gray may be on its way out 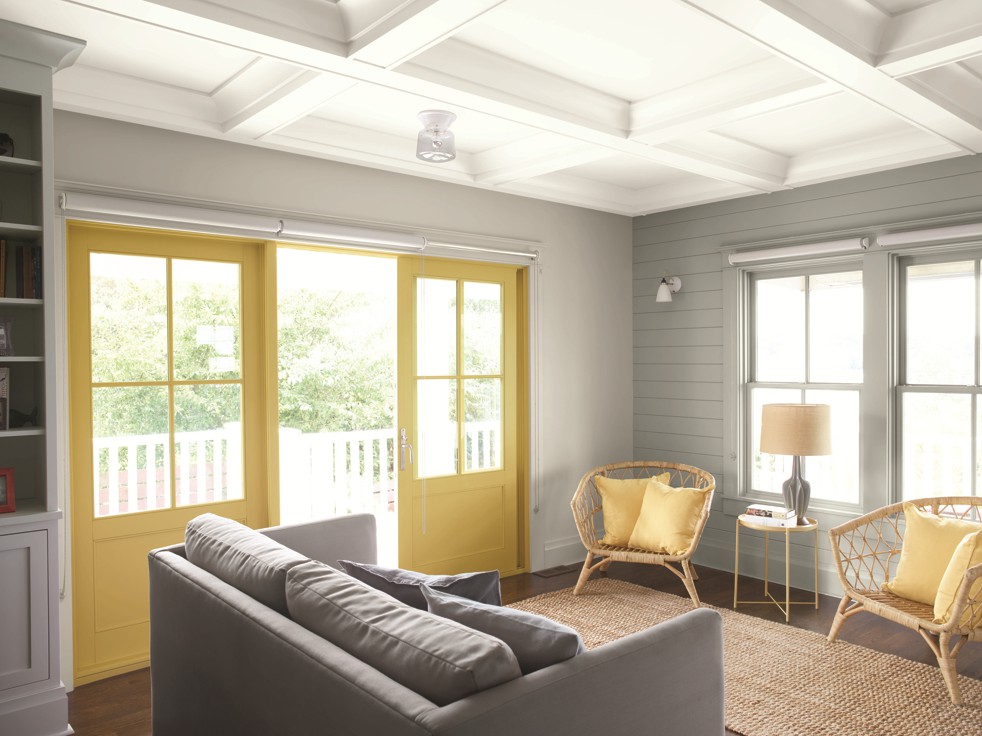 The left-hand wall of this sitting room is painted with Benjamin Moore's Gray Owl OC-52; the right wall is done with Metropolitan AF-690; the ceiling is painted in White Heron OC-57; and the doors are done in Marblehead Gold HC-11. (Photo courtesy of Benjamin Moore)

There are a lot of things people are sick of these days: bad news, limited gatherings, Zoom calls, incessant cleaning and disinfecting, and, judging from the comments I see on social media, the color gray. Whether it’s a pale shade or a deep charcoal, gray seems to have overstayed its welcome.

I get that many of you are sick of the color, in all of its variations, especially given the gloomy year we’ve had.

Gray-haters (or grayters, as I like to call them) complain that the color is ubiquitous, and, to some degree, they’re right. Walk into just about any design store, and you’ll see swaths of gray upholstery, bedding and accessories. Rental properties and spec houses have rooms upon rooms of what my educated gray eye recognizes as Benjamin Moore’s Gray Owl on the walls of bedrooms, living rooms, halls and bathrooms. Every HGTV home renovation that you see seems to be saturated with Benjamin Moore’s Revere Pewter or Sherwin-Williams’s Morning Fog.

How do I know my way up and down the gray paint chips so well? I painted almost every room of my house a shade of gray almost 10 years ago, and I wrote about it. Gray has been my go-to neutral because of its versatility; like a pair of gray pants, it goes with everything.

But grayters call the color depressing, dull and too safe. Gillian Gillies, a Toronto-based, Scottish-born interior designer who has never embraced gray, says she hopes the pandemic has ended the color’s run as the “in” neutral.

“We need hope, joy and the promise of brighter things, and I don’t think gray can offer us that.” She says her clients, who at one time were clamoring for gray, are suddenly requesting highly pigmented, saturated colors, such as aubergine, saffron yellow and all shades of green.

Colson Horton, a stylist and founder of ADR Creative in Nashville, recently left a mostly gray-hued house for a quintessential 1970s ranch house that even has a “Brady Bunch”-style sunken living room. She has gutted the home, tearing down walls and adding dentil molding and paneling. And she has painted the rooms various shades of white, blue and green.

“My old house had very tall ceilings and was very open, so gray suited the space, because it didn’t overwhelm everything,” Horton says. “It was a neutral palette that worked for the height and the scale of the rooms.”

Her new house, though, backs up to a state park, so it was important to her to carry the colors of the house’s natural surroundings to the inside, hence the focus on greens and blues. Other colors Horton is using in her house echo those that Gillies is gravitating toward: mustard yellow, ochre, chartreuse, mulberry and rust. “I felt like I needed some vibrancy,” Horton says. “Gray felt too even of a playing field, and I wanted more energy. Gray doesn’t move me in a way that I need right now.”

Jared Hughes, an Atlanta-based designer, is not averse to gray – as long as it’s a warm gray that veers closer to a brown or black. His go-to gray is Farrow & Ball’s Pavilion Gray. What he doesn’t like are grays that go too purple or pink. His other decorating peeve is when entire rooms are layered only in shades of gray. “Those rooms have such a Restoration Hardware circa [five to seven] years ago look. Totally one-note,” Hughes says. “I think in general, gray became overused, and not in the right ways – too mainstream – and it needs a break.” For an alternative, he suggests Farrow & Ball’s Stone White, a cool neutral with green undertones.

I, too, am feeling restless about some of my gray rooms. My living room (painted with Gray Owl) is about to be done over in a textured Robin’s Egg Blue wallpaper. The room has a large skylight, windows and French doors that show off lots of sky, and I have decided that rather than have the room mirror a gray, cloudy day, I want it to reflect a brighter, blue day. But other parts of my house – the guest room, guest bathroom, hallways and stairwell – will keep their Gray Owl paint, because it continues to be a solid neutral that unites the spaces, and it has allowed me to successfully mix in other colors and layer art and pattern.

I am also keeping the Benjamin Moore Whale Gray in my TV room. It’s the perfect cozy color for movie-watching, and it complements the mustard yellow and saffron accents I’ve layered into the room. (I guess I’m also gravitating toward those colors.) And I don’t think I will ever change the woodwork and trim of my bathroom, painted in Benjamin Moore’s Coventry Gray. It is still one of my favorite colors, with just the right blue undertone.

The thing is, I will always count gray as a viable neutral. I find that it works better with my aesthetic than its counterpart, beige. And although I love white, gray tones are just that much more of a color commitment and statement. Maybe, like Hughes says, there has been too much gray, and a natural correction is taking place. But regardless of your feelings about the color, I think everyone needs to stop judging other people for using it. The same color of gray that reads as depressing for some feels cozy and inviting to others.

Your home should be a reflection of what you like, regardless of what’s hot on Instagram or design blogs. Full stop. And remember: Decorating is a process. It’s about evolving and finding what makes you and your loved ones happy. Color is one effective way to get to that happiness. If you are drawn to gray – or any color, for that matter – go ahead and embrace it. Or if gray is no longer bringing you joy, then maybe it’s time for you to let it go. But only you can make that call.

Elizabeth Mayhew, a “Today” show style expert and former magazine editor, is the author of “Flip! for Decorating.”

One thought on “After years of being the ‘it’ neutral, gray may be on its way out”