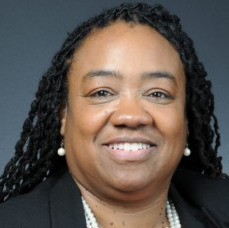 A letter signed Thursday by 16 city-county councilors is urging the Indianapolis Public Library Board to offer Nichelle Hayes the position of CEO following community outrage that she was passed over for the job.

Hayes, the former interim CEO, was a finalist in a selection process where the chosen candidate—former New Orleans library leader Gabriel Morley—declined the position.

But the library system did not offer the post to Hayes, instead choosing to reopen the search. This sparked protests by some community members at the most recent meeting of the six-member board of trustees.

The statement, which was signed by City-County Council President Vop Osili and 15 other councilors, said the IndyPL board’s decisions have created “more instability and turmoil for the institution rather than less.”

“Given the ongoing public outcry about the board’s choices in regard to selecting a permanent CEO, we feel it necessary to make our position clear,” the statement said.

A majority of the 25-member City-County Council signed the letter calling for Hayes to be offered the position. Among the signatories were 15 Democrats and one independent. The council is one of several entities, including the Indianapolis Board of School Commissioners and the Marion County Commissioners, who appoint members of the library board.

The City-County Council was in charge of appointing two members of the library board: recently-appointed Board President Hope Tribble and T.D. Robinson. Both members voted in favor of Morley and faced backlash that the decision—which offered the position to a white man over a Black woman—was racially motivated, despite both board members being Black.

Tribble, who took over for former Board President Jose Salinas, responded in a statement.

“As president of the Indianapolis Public Library board of trustees, I appreciate the feedback from members of our City-County Council regarding the search for a new CEO to lead the library, and I understand their focus is the best interest of their constituents and the stakeholders the library board is called to serve,” Tribble said in the statement. “The issues that the Councilors and others have raised will be addressed when all internal legal and governance reviews are complete.”

A press release in December said the initial search had been “compromised” due to a confidentiality breach and that a new interim CEO—someone unaffiliated with the library but active within the community—would be appointed in early 2023. The board statement said that former CEO candidates could be included in the next search.

“The search for the library’s next CEO has been expensive, both in terms of dollars and in terms of the library’s relationship with its community. We believe the library board’s recent decision to reopen the CEO search rather than appoint Ms. Nichelle Hayes will have a detrimental impact on the system,” the statement said.

In a response later Thursday, four members of the library board—Hayes supporters Pat Payne and Khaula Murtadha excluded—said that it’s incorrect to assume that Hayes is qualified because she was interim CEO, or that her status as a finalist meant the majority of the library board believed she was qualified to be CEO. It also said it was incorrect to act as though she is a “runner-up” to Morley.

The statement said the interim CEO was to serve in a “caretaker capacity” and said this person was able to be less experienced than the library system would want for a permanent CEO.

“While many have assumed that having the capacity to act as Interim CEO is a de facto illustration of having the necessary skills and experience to act as a permanent CEO, this is not the case. The Trustees were willing to accept an Interim CEO with far less managerial, leadership, and fiscal oversight skill and experience than that expected of a permanent CEO at an institution as large as the Library.”

The statement said that only three of the six members of the board were involved in the selection of final candidates, so Hayes being a final candidate for CEO does not indicate majority support from the board of trustees.

“The fact that Ms. Hayes was one of the three final candidates should not be construed as an indication that a majority of the Trustees believed Ms. Hayes, or any of the other final candidates, to be a viable option to be selected as the permanent CEO,” the statement said.

Many critics of the library board’s decision have said that since Morley, the “first choice” for CEO declined, the offer should go to Hayes. The board statement says the selection process isn’t “ranked-choice,” and that it is not atypical to restart a CEO search after a chosen candidate declines an offer.

“The search for a new CEO—at the Library or elsewhere—is not a competition in which one individual places first and another places second,” the statement said. “Rather, it is a process through which the leadership of an institution decides which candidate, is qualified to fill the role.”