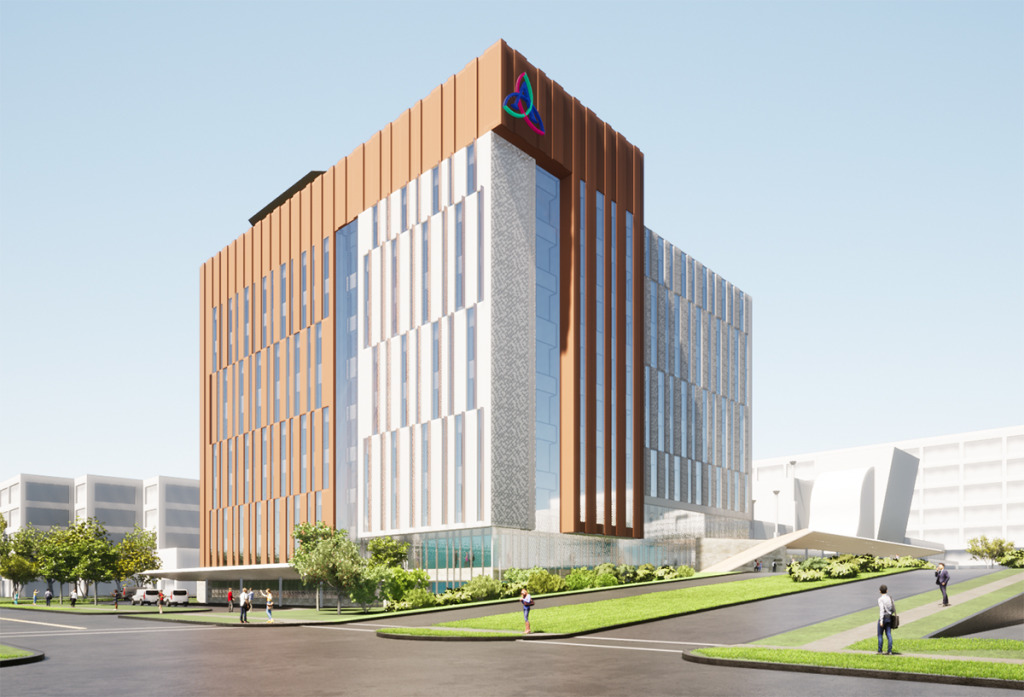 Ascension St. Vincent is planning three major construction projects worth a total of $325 million at its flagship West 86th Street health care campus over the next three years, representing one of its largest capital investments in decades.

The hospital system on Monday morning unveiled the projects, which will give a dramatic new skyline to the sprawling, 47-year-old campus that spans the better part of 20 square blocks between Ditch Road and Township Line Road.

The projects will be the latest upgrades to the campus, which already has seen more than $80 million in investments in recent years, including renovated operating rooms, a brand-new training center for doctors, and expansions to its women’s and children’s hospitals.

“These projects represent another cornerstone to the advancement of specialty care and destination medicine in the state of Indiana, the contiguous states and really the Midwest,” Jonathan Nalli, CEO of Ascension St. Vincent Indiana, told IBJ.

The heavy investment in the campus is the latest indication that Ascension St. Vincent is committed to the location, a major anchor on the south side of the busy West 86th Street commercial corridor.

In recent years, the hospital system has batted down repeated rumors that it might move some or all of the campus’ functions to a new site about a mile away, near 96th Street and Spring Mill Road in Carmel, where it has purchased more than 30 acres.

Nalli said Ascension St. Vincent still has no firm plans for that area, which remains undeveloped. He said all major clinical functions and service lines would remain at the West 86th Street campus.

“No specialties are leaving,” Nalli said. “This (investment) is more of the recognition that this is, more and more, a truly critical care hospital.”

He said the campus, which is home to a Level 1 trauma center, one of only three organ-transplant centers in Indiana, and a 625-bed main hospital, serves patients from all 92 counties and surrounding states, and is a critical part of the region’s hospital industry.

The biggest piece of the upcoming construction plan is the relocation of the women’s hospital, which is now located on Township Line Road on the far southwest side of the campus. The hospital will be moved to a brand-new, 268,000-square-foot tower, which will include 109 private intensive-care-unit rooms for infants.

The new women’s hospital will be physically connected to the Peyton Manning Children’s Hospital near the center of the campus.

The women’s hospital is home to the state’s largest neonatal intensive care unit and is one of only two Level IV perinatal health care centers in the state, which represent the highest level of care. (The other is Riley Hospital for Children, owned by Indiana University Health.)

Nalli said he expects to begin the women’s and infant hospital by this fall, and move patients in by the beginning of 2023.

The second major part of the campus overhaul is the construction of a new brain and spine hospital, which Ascension St. Vincent will staff in partnership with Goodman Campbell Brain and Spine, a large, independent surgical group based in Carmel.

The new brain and spine hospital also will allow Ascension St. Vincent to establish a residency training program in that specialty and expand its pediatric neurosurgery program.

Nalli said he expects the brain and spine hospital to open by the end of 2023.

The last part of the construction equation is the expansion of campus parking. The existing parking garage will be torn down and a new one built in its place with 300 more parking spaces. The plan also will include additional surface parking.

The garage is expected to be completed by early 2022.