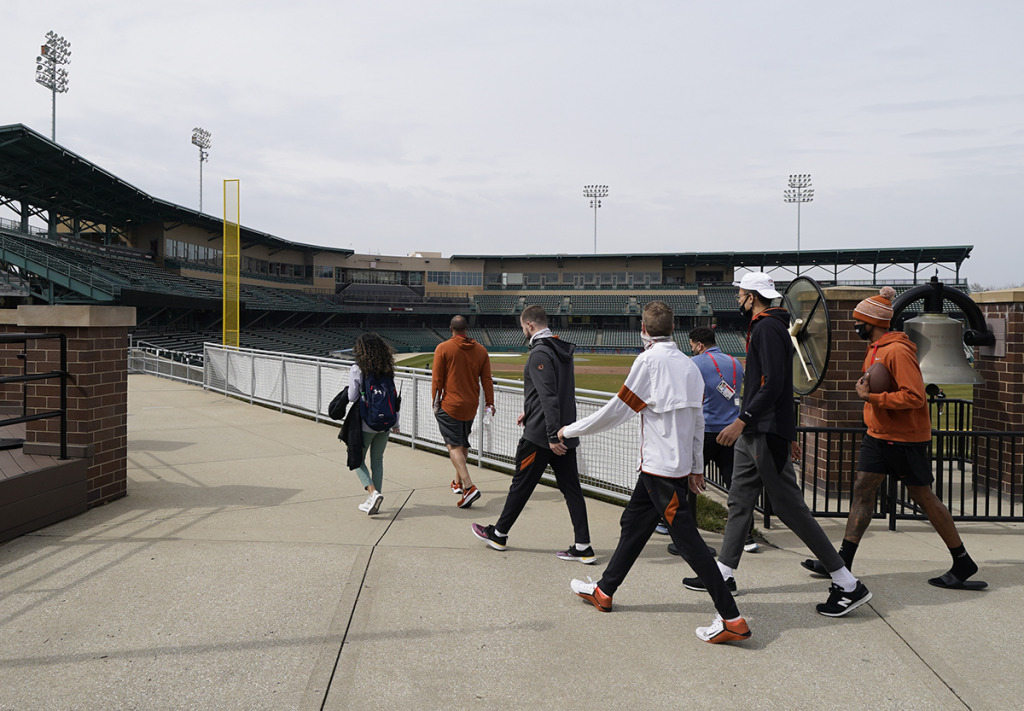 At Victory Field in downtown Indianapolis on Wednesday, a couple of coaches running laps around the warning track passed different diversions scattered across the minor league ballpark.

In one section, a badminton net. In others, a soccer ball and a football. No sign of a basketball.

When the 1,500 or so players, coaches and staff members in town for the NCAA Tournament want to get a breath of fresh air and a glimpse of some green grass, this is their option. Their only option.

This is life at a basketball tournament being played in a pandemic. The unspoken message: If they came to Indianapolis hoping for fun and games, they are not in the right place — at least not until tip-off.

“I’m in a bed for, like, 15 hours a day,” Iowa swingman Connor McCaffery said in describing his new, austere routine in Indy.

It is, quite simply, how things have to be over the next three weeks. Starting Thursday, in an attempt to get through 67 games uninterrupted, the NCAA has placed players, coaches and staff under a virtual lock and key. They don’t like calling it a bubble, but semantics aside, there is no straying between the team hotels, the adjacent convention center for practice, meetings and 30-minute windows in the weight room, and Victory Field, home of the Triple A Indianapolis Indians.

The Tar Heels might consider themselves lucky. They’re among the few teams not playing their first games in Indianapolis. Instead, North Carolina will face Wisconsin at Purdue’s home court, 70 miles away. It means the Heels get to practice there, too.

“Today, the monotony is really going to be broken up,” coach Roy Williams said. “We’re going to have two and a half hours in the bus. … It hasn’t exactly been Maui.”

Or Spokane. Or Omaha. Or Raleigh.

Normally, on the Wednesday before the start of the tournament, parking lots at arenas in cities such as those would be open, with music playing, hot dog vendors working and fans in face paint streaming in to take advantage of free admission to team shootarounds. Certainly not much to see there in the way of real basketball, but the band plays, the cheerleaders cheer and everyone gets pumped for the next day’s action.

This year, bands, mascots and cheerleaders are staying at home (at least through the Elite 8), because teams are restricted to 34 members for their travel squads.

On Wednesday, the four arenas in Indianapolis (and the ones in West Lafayette and Bloomington) were mainly empty, save for the occasional delivery truck or work crew heading in through a service entrance.

Illinois Street, which cuts through the heart of downtown in front of the convention center, was a veritable speedway, with nothing more than typical lunchtime traffic passing the NCAA-sanctioned hotels.

None of the 68 teams notified the NCAA they would have to withdraw by Tuesday night’s deadline. Gavitt said it also was encouraging that, of the 6,900 coronavirus tests analyzed so far, only seven have come back with positive results. He said players from Virginia, the only team of the 68 not yet in Indianapolis because of a COVID-19 outbreak last week, would need to clear three tests after arriving in Indy on Friday afternoon to be approved to play Ohio on Saturday night.

Gavitt also clarified circumstances surrounding the six referees who were sent home this week — one who tested positive and five who were out with him to dinner. It’s true, Gavitt said, that they had not checked into their hotel when they went out and, so, were not officially in the NCAA protocol.

“But it was not NCAA staff that encouraged meals to be had in restaurants,” he said. “At no time was there direction to go have a meal at a restaurant outside the controlled environment.”

In addressing a smattering of complaints from holed-up players, Gavitt also said there was no specific instruction that players could only be in their rooms while at the hotel. He said moving around the “controlled environment” inside the hotels and at the convention center was fine.

“There may be teams that are being more restrictive,” he said. “But as long as teams are staying in the controlled environment, we’re providing as much flexibility as possible.”

Gavitt said takeaway containers are piling up in hallways as the players order out, then have the food delivered to their rooms by staff who have been cleared to move around the hotel.

Wisconsin coach Greg Gard said a ping-pong table appeared in to the Badgers’ team room Tuesday. And the newest craze for the Badgers: spikeball.

“I didn’t realize some of our players were so good at it,” Gard said.

It could be a long three weeks, though the NCAA expects conditions to improve when 52 of these teams head home following their losses over the first two rounds.

If a “trip” to the Sweet 16 isn’t motivation enough, Gavitt dangled this little carrot: “We’re going to take some teams to Top Golf, where we’ll have the whole facility to ourselves,” he said.

All of which fits in with Gonzaga’s plan.

“I brought a few golf balls, a putter and I kind of line up a water bottle at the end of the room,” said Corey Kispert of the top-seeded Bulldogs. “Gotta make sure the game’s sharp by the time springtime comes.”