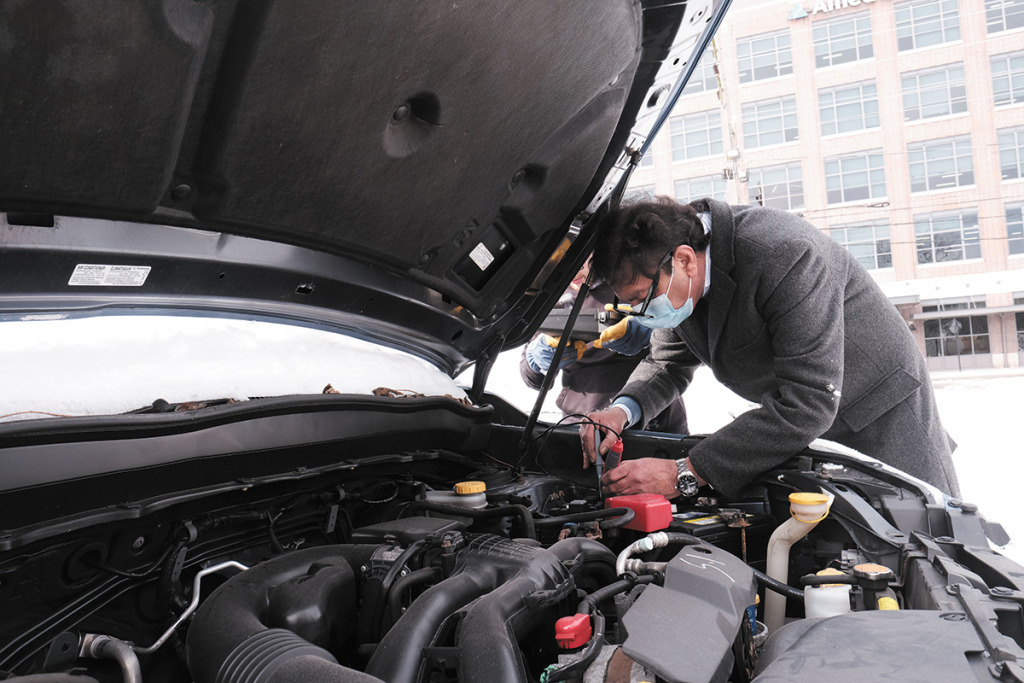 A veteran of a specialty auto-industry sector called floor-plan financing has launched a lending company in Carmel that promises independent car dealers funding wherever they buy vehicles.

That firm—Kinetic Advantage—is growing fast. It made its first deal in November, and is already financing inventory for small and midsize car dealerships in 25 markets. It has 110 employees, with plans to add 273 within three years.

Marty McFarland is Kinetic’s founder. He said he started the company after waiting out a non-compete clause he signed at NextGear Capital. NextGear leads the market in floor-plan financing—a revolving line of credit borrowed against inventory—for independent dealers.

McFarland was a co-founder of NextGear’s predecessor, Dealers Services Corp., where he served as chief financial officer. He sold that company to Manheim Automotive Financial Services in 2013. The company then rebranded as NextGear Capital, which still operates in Carmel.

McFarland initially stayed on with NextGear but left to lead Coastal Credit, a company that acquired and serviced subprime automobile loans. McFarland moved that firm from Virginia Beach, Virginia, to Carmel in 2015, where it operated until last spring.

In March, Coastal told the state it would shut down and lay off all 127 employees by midyear. McFarland told IBJ the industry’s margins were thin, and Coastal lost its private equity firm backing. As a result, the company ceased operations.

Shortly thereafter, he launched Kinetic at the same address.

Kinetic, which specializes in financing $100,000 to $500,000, has already secured more than $225 million of initial debt and equity funding to support its expansion, including an investment from Palo Alto, California-based Altamont Capital Partners.

The terms of Altamont’s investment were not disclosed, but the firm’s managing director, Sam Gaynor, said Altamont had “committed significant equity capital to the business to support its ambitious loan growth forecast.”

“Altamont has a track record of backing best-in-class operators in financial services to address market needs, and that is the case with Kinetic,” Gaynor said.

McFarland said what makes Kinetic unique is its willingness to finance inventory from wherever dealers buy it.

“Historically, floor-plan companies have grown up around automotive auctions because that’s where dealers buy their cars,” McFarland said. “We’re completely agnostic to where they buy, and that provides a phenomenal opportunity for us. We wanted to be there for the independent dealer wherever he wanted to do business, without bias.”

Kinetic has also developed a technology platform that it says streamlines the customer experience and provides transparency around fees.

Velocity had about 30 cars on its lot when a Kinetic representative walked in the door. Ansari already had financing through NextGear, Carmel-based KAR Global’s Automotive Finance Corp. and Los Angeles-based Westlake Financial Services. But he saw a $200,000 line of credit from Kinetic as a way to increase and diversify his offerings at the time—BMWs, Mercedes and Range Rovers—with more economical car models.

Now, Velocity has 50 cars on the lot, and Ansari views Kinetic as his primary lender.

He said he likes that Kinetic offers free monthly audits, which help dealers track and reconcile the inventory they’ve financed. And he said Kinetic offers competitive interest rates, as well as a sense of transparency about fees or other charges.

“It’s their approach, their professionalism, their willingness to work with you,” he said.

McFarland said he doesn’t mind that his dealers also use other floor-plan companies. He didn’t launch Kinetic to try to replace those larger corporations, he said. Instead, he wants to make it easier for dealers to find financing.

That’s important because the pandemic has squeezed used-car dealers from both sides, said Karl Brauer, executive publisher of Carexpert.com. Manufacturing shutdowns crimped the supply of new cars while buyers moving from cities to the suburbs has increased the demand for cheap commuter vehicles, he said.

As a result, the cost to keep dealers’ lots full has gone up and many dealers are piecing together several financing options to manage.

At the same time, Brauer said, declining interest rates over the past two decades have gone into free fall during the pandemic. That has made it attractive for new companies like Kinetic to jump into an automotive-financing arena that had been dominated by manufacturers, traditional banks and the financing arms of giant automotive wholesalers.

“Unless [Kinetic] had a time machine to see the future, I think they timed it quite well by chance,” Brauer said. “Basically, everything the pandemic did supported car ownership. Anyone who is involved in car purchasing and transactions benefited from that.”

McFarland said Kinetic alleviates some of the pressures independent dealers face by providing technology that makes transactions among dealers, their vendors and customers easier.

“People don’t appreciate the used-car dealer. These are tough jobs. They’ve got to get up every day and compete with not only the big-car dealers, but with each other,” McFarland said. “Dealers have a lot going on, and the more you ease their workload, the more of a relationship you’ll have over time.” 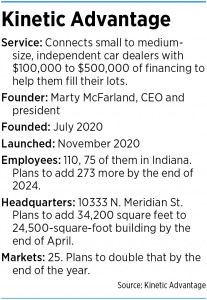 Kinetic is positioning itself to double the number of markets it operates in, to 50, by the end of the year. The company also plans to expand its 10333 N. Meridian St. headquarters 140% within three years to accommodate its growing workforce.

Already, the company has added 45 employees, growing from 65 to 110, with 75 employees based in Indiana. A number of Kinetic’s employees came from McFarland’s previous companies or other floor-plan providers, so he’s drawing on a deep well of experience.

“With other companies, when they get large, they take any angle they can for operational efficiencies,” McFarland said, citing employee reductions or neglected customer service. “Frankly, it doesn’t have to be that way. If you’re focused on the dealer’s business and you’ve got a two-way relationship with a dealer, that relationship can scale with the company.”

Brian Geitner was CEO of Dealer Services Corp. when McFarland sold it; he later became a president at NextGear and Cox Automotive Solutions. He said Dealer Services also saw “whirlwind” growth when he and McFarland were at the helm. But the $225 million in backing Kinetic has secured puts it on par with the previous company’s start.

“The independent dealer is huge, and they have always taken second fiddle to the franchise dealerships,” Geitner said. “Making them the No. 1 customer in the eyes of Kinetic is going to advance what they can do and advance the industry.”

But Kinetic might not actually steal market share from larger floor-plan financing companies because there’s enough business to go around, Geitner said.

McFarland said there are other small, regional floor-plan providers like Kinetic across the nation, but NextGear and AFC have the widest geographic spread.

“I could see Marty having growth for years without really waking up the industry giants,” Geitner said.

Max Zanan, an automotive industry expert with 20 years of experience in sales and dealership management consulting, said a company like Kinetic might find it hard to capture dealers’ interest unless it can offer larger lines of credit than $100,000 to $500,000. Dealers might not want to juggle financing from several firms.

“You can think of it as having five different credit cards in your wallet with low limits, or having one American Express card with a high limit,” Zanan said. “It creates confusion. Everybody’s fee structure, everybody’s interest rate is different. From a dealer’s perspective, it’s making five monthly payments instead of one.”

“That’s a meaningless amount for any car dealer,” he said. “Maybe it’s not in your business model to serve the big fish, but what we’re talking about is not big fish. It’s the average used-car dealer.

“In certain cases, Kinetic Advantage will grant lines in excess of $500,000, depending on the dealer needs,” McFarland said in a follow-up email. “We encourage dealers to diversify their financing as any prudent business owner should. We will win more of the dealer’s business over time given our high-touch service and our singular focus on our dealer partner’s success.”

Zanan said any floor-plan financing company’s promises of advanced technology or intimate customer service are little more than adding lipstick to a pig. Still, he said, the industry and dealers could benefit from a little more competition.

“At the end of the day, the more in play the better,” he said.

Despite Zanan’s criticisms, McFarland said the automotive floor-plan industry has thrived during the pandemic and he’s opened his third Indianapolis-area startup because he believes the metro area has plenty of business and knowledgeable industry experts to help him.

“This is a great place to start a business. Indiana has got a lot to offer,” he said. “Even through the pandemic, it has been a vibrant financing market for used-car dealers. The market itself for auto financing has remained robust, and that lifeblood of the industry has continued unabated.”•