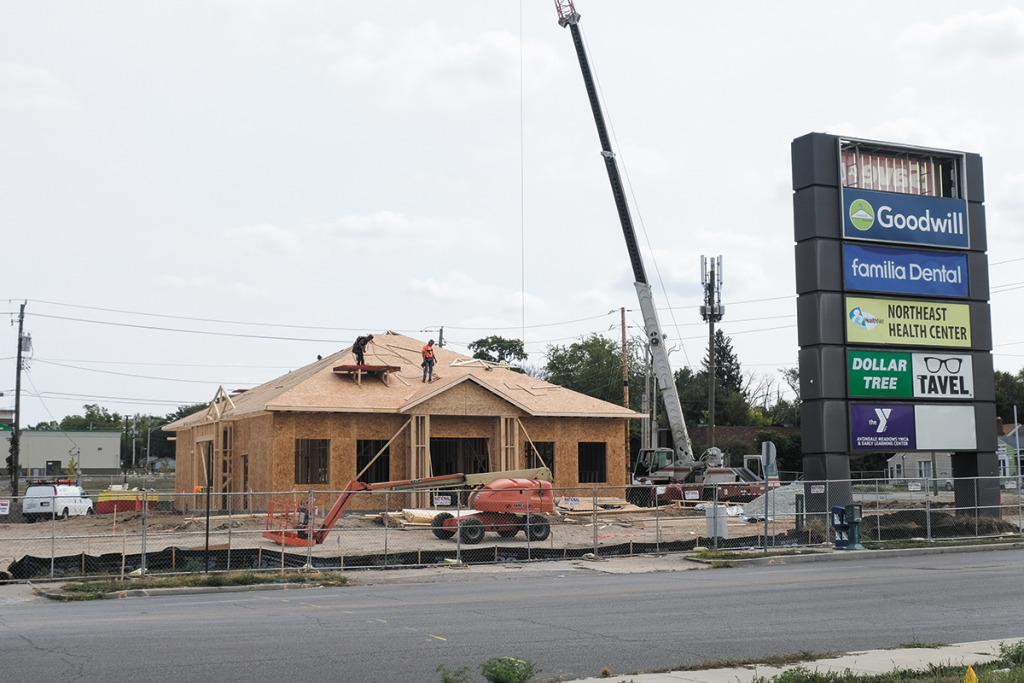 First Merchants Bank has begun constructing a $2 million branch that’s expected to open in the mostly Black Avondale Meadows neighborhood in late November—the most visible sign yet of sweeping changes at the Muncie-based financial institution after it settled redlining investigations last year.

The bank in the summer of 2019 pledged to invest millions to resolve inquiries by the U.S. Justice Department and Fair Housing Center of Central Indiana.

“But I can tell you what we did do—we learned. It was clear to us that we could do better, and we needed to do better,” said Mike Rechin, First Merchants’ CEO. “We are doing better.”

Construction began last month on the branch, which is at East 38th Street and Meadows Drive—an area that has been without a banking office since a Chase location closed about three years ago.

Rechin said it was one of about four sites First Merchants considered, fulfilling settlement terms stipulating that it open a branch in a majority-Black Indianapolis census tract. He said he liked the site in part because a YMCA that opened in 2013 has given the neighborhood momentum.

“The banking services that have been located there had pulled out over the years and kind of created a desert there,” Oliver said.

First Merchants’ negotiated separate settlements with the Justice Department and the not-for-profit Fair Housing Center, both of which were announced on June 13, 2019. One or both pacts stipulate that the bank:

◗ Open a loan-production office in Marion County, which it did at Pan Am Plaza in August.

◗ Originate $4 million in loans for development of multifamily housing in majority-Black census tracts. Rechin said the bank is moving ahead with one project and plans others.

◗ Provide a total of $500,000 in grants to the Mapleton-Fall Creek Development Corp., Renew Indianapolis and Near East Area Renewal.

◗ Contribute $550,000 to the Fair Housing Center of Indianapolis and provide an additional $150,000 to the organization for a program addressing lending discrimination in the financial services industry and increasing the number of qualified loan applications from Blacks.

◗ Spend at least $150,000 on a targeted advertising and outreach campaign.

◗ Appoint a community lending and development director, which it did with the hiring of Jadira Hoptry last month. She came from Fifth Third Bank, where she’d held a similar position for nearly a decade.

Rechin said First Merchants has been developing partnerships with community leaders who understand neighborhoods’ needs. He said the bank was thin on such relationships after expanding into the Indianapolis market by acquiring Plainfield-based Lincoln Bank in 2009, Noblesville-based Community Bank in 2014 and New Castle-based Ameriana Bank in 2016.

The Fair Housing Center began investigating First Merchants in 2016, amassing information that it had done little lending in Black neighborhoods and to Black homebuyers. It shared its concerns with the bank two years later.

“We were pleased First Merchants stepped up and did enter negotiations with us to try to address the issues we had uncovered,” said Amy Nelson, the center’s executive director.

Meanwhile, the Justice Department separately launched an investigation that was on a similar trajectory. It notified the bank of its inquiry in June 2017.

According to the Justice Department’s lawsuit, First Merchants had no Marion County branches until it bought Ameriana, which was in the process of building one in Broad Ripple.

The suit noted that Marion County is home to 50 of the Indianapolis area’s 51 majority-Black census tracts. Blacks represent 27% of the county’s population, while no other Indianapolis-area county has a Black population topping 8.3%.

While First Merchants had 34 branches in the metro area, 33 were in majority-white suburban counties, the Justice Department noted.

Until 2015, for purposes of complying with the U.S Community Investment Act, First Merchants defined its “assessment area” as the metro areas east, north and west of Marion County but not Marion, the lawsuit said.

“The irregular, horseshoe-shaped nature of the Indianapolis [metro area assessment area] included nearly all the majority-white suburban counties … while carving out the urban core and thus almost every majority-Black census tract within the Indianapolis-Carmel-Anderson MSA,” the lawsuit said. 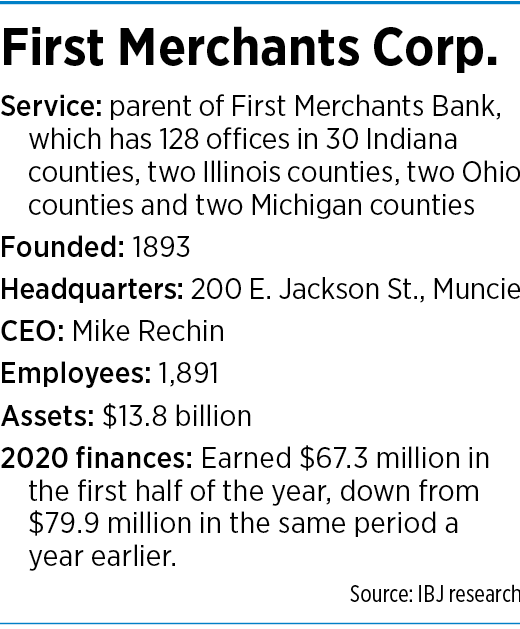 The Philadelphia-based law firm Ballard Spahr noted in an online post that the First Merchants redlining settlement was only the second negotiated by the Department of Justice after President Donald Trump took office in 2017. The other involved Minnesota-based KleinBank in 2018.

Neither settlement required the bank to pay a financial penalty. In contrast, settlements struck during the Obama administration often included fines.

In 2016, Tennessee-based BancorpSouth Bank agreed to pay $3 million to resolve a lawsuit accusing it of discriminating against Black loan applicants.

However, Cincinnati-based Union Savings Bank and another bank under common ownership were spared a financial penalty in 2016 after the Justice Department accused them of redlining Black neighborhoods in three Ohio markets and in Indianapolis.

However, the banks agreed to invest at least $9 million in Black neighborhoods in the four cities.

Rechin said First Merchants now plans to take the playbook it developed for Indianapolis and use it in other major Midwestern cities where it operates, including Detroit and Columbus, Ohio.

Toward that end, First Merchants in June announced a five-year, $1.4 billion community reinvestment plan, which it put together with the National Community Reinvestment Coalition and other partners.

The plan targets low- and moderate-income neighborhoods, as well as rural areas. It includes $580 million for community development lending and investments, $423 million for small-business lending and $398 million for mortgage lending.

“We are walking the talk of being the best partners we can be, not just in Marion County but in the rest of the company,” Rechin said.•