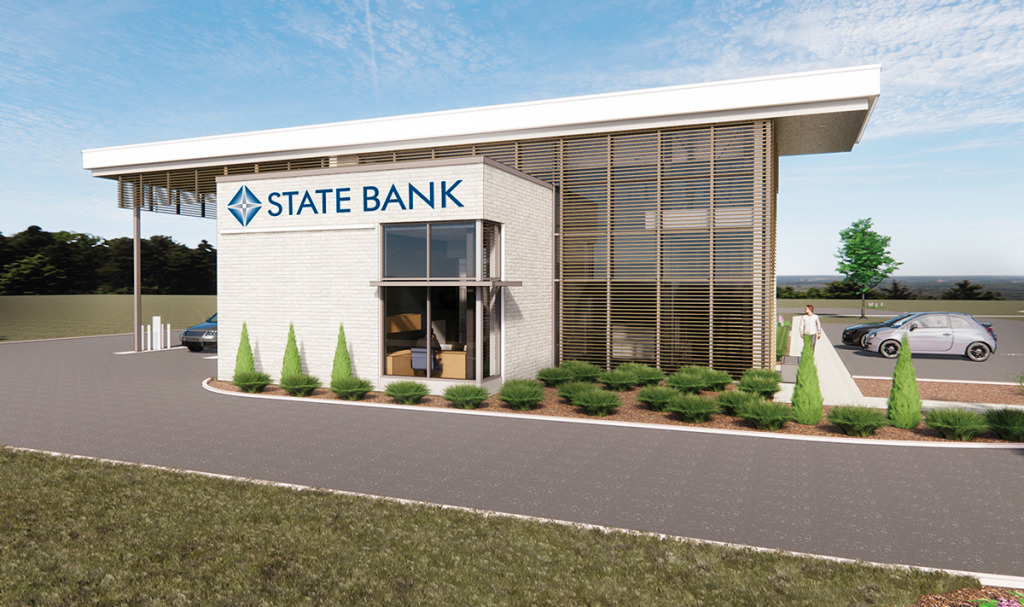 State Bank of Lizton is in the process of rebranding itself as State Bank and is opening three branches. (Rendering courtesy of State Bank)

State Bank of Lizton and First Farmers Bank & Trust, both Indiana-based community banks, are planning to open a total of three new locations in Hamilton and Hendricks counties within several months.

Brownsburg-based State Bank of Lizton, which is in the process of rebranding itself as State Bank, plans to open its first Hamilton County branch next spring at the corner of East 126th Street and Gray Road in Carmel.

Andy Pinegar, a commercial lender at the bank, has been named Carmel/Hamilton County market president.

State Bank will also move its Danville branch to 8589 Rockville Road in Avon, near the Hendricks Regional Health YMCA. That location is set to open Nov. 9.

The bank’s Carmel office will be part of the Brookshire Village Shoppes retail strip center. Indianapolis-based real estate investment firm KennMar acquired the center last September, and State Bank provided acquisition and redevelopment financing for a revitalization of the property.

State Bank has more than $500 million in assets, with nine locations in Boone and Hendricks counties.

Converse-based First Farmers plans to open a new office by the end of the year at 1100 S. Peru St., in the Hamilton County town of Cicero.

First Farmers purchased the 2,500-square-foot facility from Muncie-based First Merchants Bank, which previously operated a branch there. First Farmers said it expects to open the branch in early December after extensive interior renovations. Mitsch Design of Carmel is handling the renovations.•