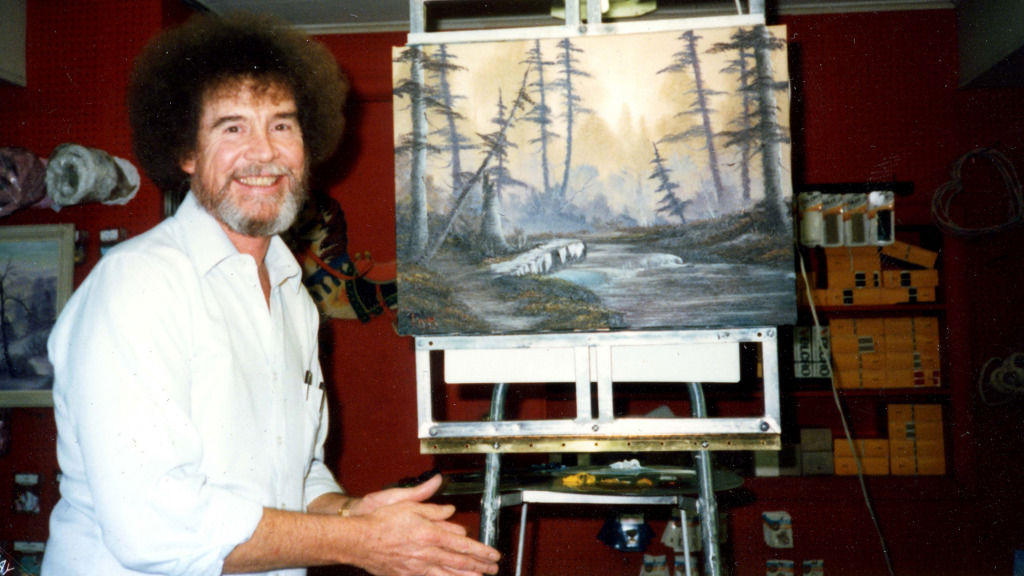 Bob Ross brought happiness to many as the honey-voiced host of “The Joy of Painting,” the long-running PBS show that taught viewers how to paint lush landscapes and vivid skies in less than 30 tranquil minutes. But a new Netflix documentary examines Ross’ legacy and the bitter dispute over the continued use of the TV personality’s name and likeness.

“Bob Ross: Happy Accidents, Betrayal & Greed,” which premiered this week, recounts how Ross created a cultural phenomenon with the series he modeled after William Alexander’s “The Magic of Oil Painting.” The film features commentary from Ross’ son, Steve Ross, and others who worked with “The Joy of Painting” host over the course of his show’s 31 seasons. Those shows were all filmed in Indiana, at the studio of the PBS station WIPB-TV in Muncie.

It notably does not include contemporary interviews with Annette and Walter Kowalski, the couple who partnered with Ross to bring “The Joy of Painting” to PBS stations and events across the country—and who control Bob Ross Inc., the company that oversees the use of Ross’ name and image. The Kowalskis worked alongside Ross and his second wife, Jane, to build an artistic empire that includes paints and brushes bearing Ross’ name and visage. But the Rosses and Kowalskis had vastly different visions for that empire, according to those in Ross’ inner circle.

The drama, which was detailed in a deeply reported article by the Daily Beast in May, is in striking contrast to the peaceful tone of Ross’ series, which has found new generations of fans through streaming. Here are the main takeaways from the film, which was directed by Joshua Rofé and produced by Melissa McCarthy and her husband, Ben Falcone.

– Ross was very much like his TV persona, but catered his on-screen presence to women.

One of the documentary’s more innocuous revelations is that Ross’ signature curls, a not-quite-afro, were achieved with a perm. But pretty much everything else about “The Joy of Painting” was authentic, including the host’s charm. “The Bob you see on TV is pretty darn close to his real attitude, about nature and about everything, really,” his son Steve says.

Ross’ soothing demeanor, a hallmark of the show, has long been associated with his departure from military service, following 20 years in the Air Force. “I was the guy who makes you scrub the latrine, the guy who makes you make your bed, the guy who screams at you for being late to work,” he told the Orlando Sentinel in 1990. “The job requires you to be a mean, tough person. And I was fed up with it. I promised myself that if I ever got away from it, it wasn’t going to be that way any more.”

But the documentary puts forward another reason for his soft-spoken approach: the women who watched his show. “A lot of the audience is women, so maybe I’ll try to whisper,” Steve Ross recalls his father reasoning. The documentary plays a clip of Ross painting his trademark “happy little clouds.” “Make love to it here,” the host advises. “Very gentle.”

One art expert interviewed in the film points out the parallels between “The Joy of Painting” and other how-to books that became prominent in American culture—namely “The Joy of Cooking” and “The Joy of Sex.”

“He was trying to be a little sexy,” Steve confesses.

– According to his son, Ross had an affair with his business partner.

The host’s style attracted an enthusiastic contingent of female fans—and the documentary alleges that Annette Kowalski was among them.

Ross and the Kowalskis met after Annette attended one of Ross’ instructional workshops. The Kowalskis were grieving the death of their son and, like many of Ross’ adoring fans, Annette found solace in learning to paint from a man who called mistakes “happy accidents.” In a clip, Annette says she told Ross, “I don’t know what you’ve got, but I think we ought to bottle it and sell it.”

“I don’t think Bob really understood what the future held for him at that time,” Ross’ friend and fellow artist John Thamm says in the doc. “He was just not into it for the money. But the Kowalskis certainly were.”

The Kowalskis and Rosses worked so closely together, the couples even moved in together at one point. Annette Kowalski appeared on several episodes of “The Joy of Painting,” and their close relationship—no secret on the craft hobby circuit—spurred rumors.

“I don’t know, do I go there? Was Bob and Annette a thing?” Ross’ friend and colleague Dana Jester says during his interview. “Everybody always asks that question. And the answer is: Steve might know.”

The documentary flashes to Ross’ son, taking a long swig out of a coffee mug. “There was an affair between my father and Annette, yes.”

He recalls overhearing an argument between his father and stepmother after Jane learned of the affair. Steve reports that the couple worked it out before his stepmother’s death in 1992, but that the partnership between the Kowalskis and the Rosses was never quite the same after that.

The Kowalskis denied the affair—and any rift with Bob Ross—through their lawyer in the documentary, which informs viewers that “more than a dozen people who knew or worked with Bob” declined to be interviewed for the film out of fear they would face legal retaliation.

– Before his death in 1995, Ross struggled to come to an agreement on how his legacy should be preserved.

Weeks after Jane’s death, Ross was diagnosed with non-Hodgkin’s lymphoma. The documentary recalls that Ross used paint thinner to achieve his trademark wet-on-wet technique (also known as alla prima), and at least one friend speculates that the chemicals could have led to Ross’ cancer. But despite his illness, Ross continued taping shows—sometimes up to three in one day. “When you see all those later series, he was literally suffering from cancer,” Jester says.

This portion of the documentary is particularly heartbreaking. Steve, who taught his father’s methods and intermittently appeared on “The Joy of Painting,” recalls feeling pressured to do his father’s shows. “There was a power struggle between us, I guess you could say.” They went several years without speaking, eventually reconciling as Ross got sicker.

It’s clear that Ross was deeply loved. Sally Schenk, who directed dozens of “The Joy of Painting” episodes, cries recalling the moment she was told Ross had cancer.

It was when Ross was nearing death, Steve alleges, that the Kowalskis asked him to get his father to sign a “memorial agreement.”

“It looked to me like they were trying to get Bob to sign his name over to them,” Steve says, noting that the request, which the Kowalskis reportedly reiterated over several weeks, led to an explosive argument. “You could hear him screaming, ‘I’m not giving you my name.’ ” Jester also recalls Ross telling him “they’re trying to steal my name on my deathbed.”

The Kowalskis did not attend Ross’ funeral, according to Steve. “Even worse, they tried to keep secret the fact that the funeral was even happening.”

“They wanted people to believe that he was still alive and many people did,” Steve says.

– Insiders allege that Ross’ image is not being used according to his wishes.

“The Joy of Painting” became popular around the world, with the show dubbed in multiple languages. But some interviewed in the documentary make dark allegations about how the Kowalskis ran Bob Ross Inc. in the wake of the television personality’s death. A former employee of the company’s European outpost alleges that he saw someone forging Ross’ signature onto paintings. Artists Gary and Kathwren Jenkins, who helmed a show instructing floral paintings in the 1980s, allege that Annette Kowalski copied their teaching style and pressured an art supply distributor to end its long-term relationship with them.

But the most notable drama stems from Ross’ end-of-life wishes. Steve says his father married a nurse who had taken care of him in his final months in hopes of maintaining some control over his company. After Ross died, the Kowalskis sued her, along with Ross’ half brother, Jimmie Cox, over the rights to Ross’ image.

Steve sued Bob Ross Inc. in 2017 after discovering that his father had initially signed over all the intellectual property rights to him and Cox. But it was in the course of that lawsuit that Steve learned that his uncle—with whom he says he has a “shaky” relationship—had responded to the Kowalskis’ lawsuit against him by signing over all of the rights “totally against my father’s wishes.” (Cox, the documentary informs us, is one of the people who declined to be interviewed out of fear over being sued by the Kowalskis.)

Steve lost the suit in 2019, which means he cannot profit from his father’s name or image, which is ubiquitous in pop culture—from mugs to memorable “Euphoria” episodes. One stipulation of the ruling was that audiotapes reportedly detailing Bob Ross’ wishes be destroyed.

“They literally wanted to steal Dad’s name,” Steve says in the documentary. “And did.”

Esquire reports that the Kowalski family denied this in a statement released after the documentary, noting that “Bob Ross may not have shared the inherent structural features of his company with family and friends—which are very common in small private companies—resulting in many of the unsubstantiated accusations made in the film.”

The documentary ends on a more inspirational note befitting its subject, with fans of Ross detailing the ways he made their lives better, helping them to get through depression and trauma.

“That was the whole idea behind Bob Ross and his painting,” Steve says. “He was going to teach people that they could be valuable, they could be important in this world.”

“They’ve learned to create their own masterpieces,” Ross says in voiceover as his son swirls majestic, pink-hued mountains onto a wet canvas. “It’s what makes all this worthwhile.”