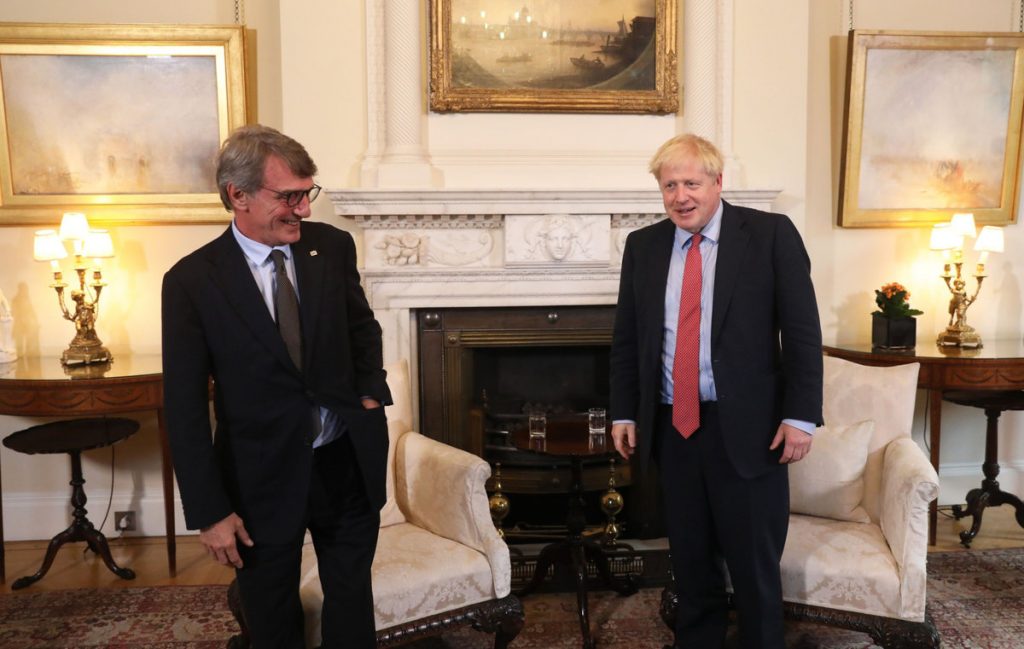 Boris Johnson, U.K. prime minister (right) speaks with David Sassoli, president of the European Parliament, before a meeting inside 10 Downing Street in London, on Oct. 8, 2019. (Bloomberg photo by Chris Ratcliffe)

BRUSSELS – European and British negotiators struck a deal Thursday to split Britain from the European Union, raising the prospect that the country could be out of the bloc by the end of October.

Negotiators working through the night in Brussels came to an agreement Thursday morning after Prime Minister Boris Johnson signed on despite lingering questions about warring Brexit factions in London. The agreement would still need approval by European leaders and the British Parliament.

“We’ve got a great new deal that takes back control – now Parliament should get Brexit done on Saturday so we can move on to other priorities like the cost of living, the NHS, violent crime and our environment,” Johnson tweeted.

British lawmakers passed a law requiring Johnson to ask to delay the Oct. 31 Brexit date if a deal to ease the exit isn’t in place by Saturday.

“Where there is a will, there is a #deal – we have one! It’s a fair and balanced agreement for the EU and the UK and it is testament to our commitment to find solutions,” wrote European Commission President Jean-Claude Juncker on Twitter.

Earlier in the day, the leader of the key Northern Ireland Democratic Unionist Party, Arlene Foster, said she could not back the current proposal.

The party did not immediately publicly sign on to the newly announced deal, but Johnson said that the plan was ready to go. It could still fall apart in Parliament, as a previous deal did under Johnson’s predecessor, Theresa May.

Diplomats said that if a deal is reached Thursday, it could still be possible – just barely – to get it ratified by the European Parliament by the end of the month, giving Johnson a strong incentive to wrestle his warring political tribes into submission.

One senior E.U. official said that Johnson told the Europeans that he could get a deal ratified in Britain in six days. Still, leaders are poised to convene again in Brussels before the end of the month, amid a growing sense that nothing can be finalized during the two-day summit that was getting underway.

According to people briefed on the talks, Johnson was willing to make a slew of concessions in the interest of fulfilling his promise to get Britain out of the European Union this month – and perhaps at any cost.

Not only does he have to strike a bargain that can get the approval of 27 other E.U. countries – itself a difficult task – but he then must sell it at home. British domestic politics can be unforgiving. Johnson’s predecessor, Theresa May, made a deal with Brussels only to have it defeated three times in Parliament.

Before the two-day summit begins, representatives from each of the E.U.’s 27 remaining member states will want to digest any deal and make recommendations to their leaders. In Europe’s consultations, where not all leaders speak English, even translations sometimes need to be given time.

Right now, the boundary is mostly invisible. Both sides want to keep it that way, to preserve the peace of the Good Friday Agreement – but they have differed over how to achieve it, with Britain going in one economic direction and the E.U. going in another.

Under the current deal, Northern Ireland would remain aligned with most E.U. rules so that the border could stay open. Eventually, Northern Ireland lawmakers could vote to move closer toward the rest of the United Kingdom.

It bears a strong resemblance to an arrangement the E.U. floated more than a year ago – and that May said would never work for London because it would require customs checks in the Irish Sea for goods traveling inside the United Kingdom.

But now, Johnson appears willing to cross red lines if it means he can fulfill his promise to deliver Brexit by Oct. 31. That would mean convincing his partners in Britain.

Foster of the DUP, who has become a key person in the bargaining, has said she wants more of a role for her party in determining the future of Northern Ireland.

The remaining 27 E.U. countries, meanwhile, want to make sure that differences in the tax systems between the E.U. and Northern Ireland don’t encourage smuggling or other behavior that takes advantage of the situation.