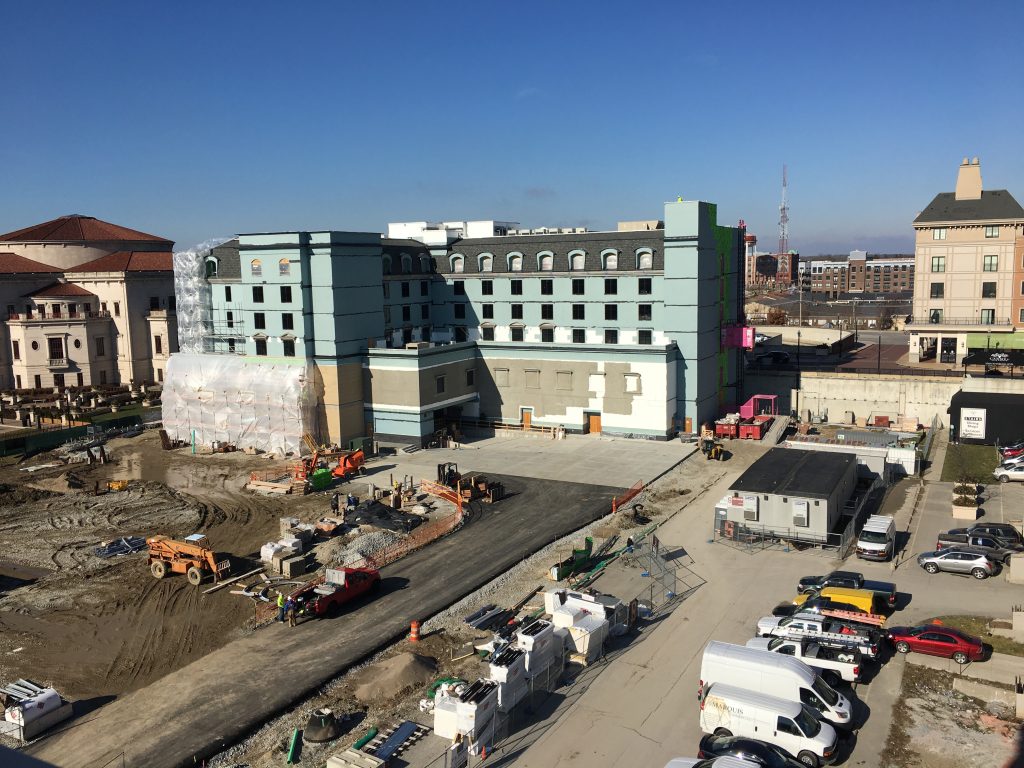 Carmel’s high-end boutique hotel project, The Hotel Carmichael, is expected to cost at least $20 million more than the city first estimated in mid-2017.

City officials, on Friday night, said the total price tag for the city-backed project has risen to $58.5 million due to rising construction and labor costs. The hotel is slated to open in May.

IBJ began inquiring about rumored cost overruns on the project in mid-January, but the Carmel officials did not respond until issuing a general press release Friday night.

Carmel also announced Friday that the Hotel Carmichael will contain a full-service French restaurant called Vivante managed by Tulsa, Oklahoma-based Coury Hospitality, a consultant hired by the city to help with the hotel in early 2017.

According to a project summary Mayor Jim Brainard presented to Carmel City Council members in July 2017, the estimated budget for the hotel was $38 million. By the time officials approved about $18 million in bonds two months later, the price had risen to $40 million.

The six-story hotel, which is being developed by Pedcor Cos., will operate as part of the high-end Autograph Collection by Marriott. Plans call for 106,347-square-foot hotel to contain 122 guest rooms and suites and about 3,200 square feet of meeting space. The structure will be connected to the Carmel City Center and is across the Monon Trail from the Palladium.

Henry Mestetsky, director of the Carmel Redevelopment Commission, blamed rising construction material and labor costs for the 46% increase over the previous $40 million budget. The city now lists $41.9 million in “hard construction” costs, $3 million for the land and $13.5 million in soft costs.

Mestetsky said the 2017 estimated budget was based off other local luxury hotels that were being built at the time, such as the Ironworks and Alexander hotels in Indianapolis.

In 2018, the cost of materials increased at a pace of nearly 10%, and several key materials and resources increased even more, including oil, iron, steel, lumber, aluminum and asphalt paving mixtures, the report states. Those costs were due in part to natural disasters and tariffs on Chinese goods.

Low unemployment rates across the country are also contributing to increased construction costs, as developers deal with labor shortages.

“This isn’t surprising,” Mestetsky said. “Every step of the way, we tried to cut costs and value-engineer. There were almost $2 million in cuts. We saw what was happening.”

Despite a switch to cheaper facade materials and a shingled roof instead of slate, the Carmel Redevelopment Commission found itself responsible for filling the multi-million dollar gap.

Mestetsky said the commission has identified about $4.7 million in its operating budget, about $7.6 million in new mortgages on the James Building and Monon Square, as well as $2 million from a pre-existing tax increment finance bond issued in 2016.

“This isn’t new issuance; this isn’t new debt,” Mestetsky said. ” This is a bond we’ve been making payments on all along.”

As a result, Mestetsky said, there will not be an impact to taxpayers or the city’s interest in the project. He said the CRC will be reimbursed $12 million from the hotel’s profits, after its debts are paid.

Mestetsky said the commission will collect 75% of all hotel profits before they’re distributed to the hotel’s investors, including Pedcor. If the hotel does well—as he expects it to—it could take as little as five years for the CRC to make that money back, Mestetsky said.

As a result, Mestetsky said, Pedcor will also have to wait a longer time to realize a profit.

“This is the nature of public private partnerships,” Mestetsky said. “The commission’s preference has always been to build the right hotel, the hotel that is going to be the centerpiece of the city.”