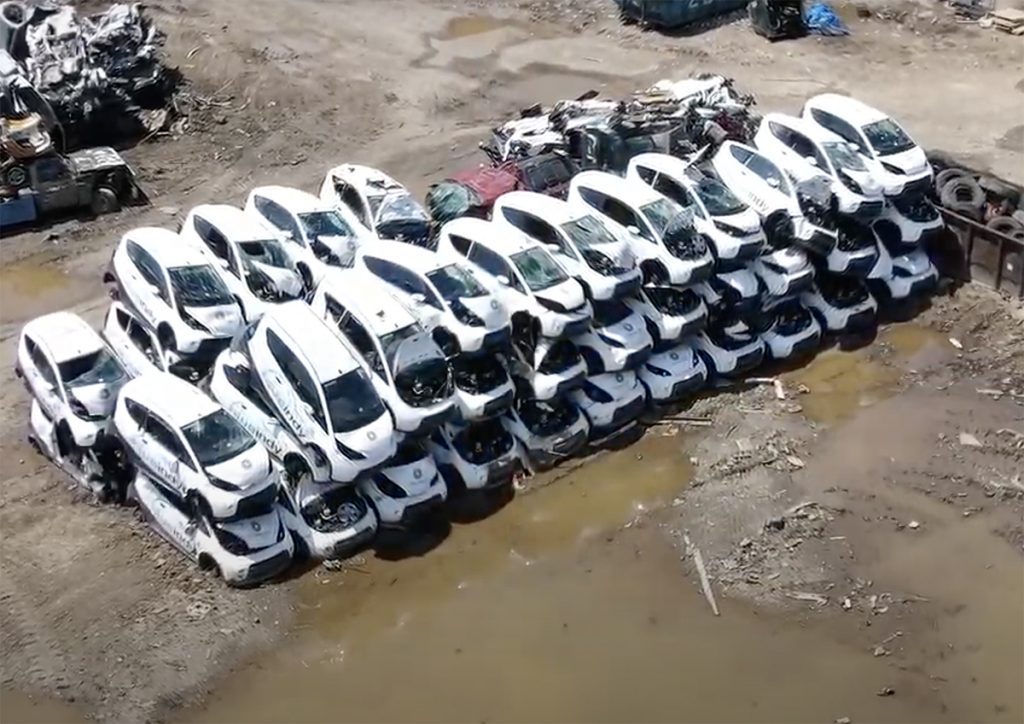 Dozens of BlueIndy cars that suffered body damage have been towed to a west-side scrapyard after vital components were removed. (Photo courtesy of WTHR-TV Channel 13)

The city of Indianapolis is preparing to issue a formal request for ways to utilize the BlueIndy charging stations as well as the underground infrastructure that supported the electric-car-sharing service.

The city will issue a request for information next month that will solicit “cost-effective, place-based uses” for the below-ground infrastructure and footprint of existing BlueIndy stations.

BlueIndy launched in Indianapolis in September 2015. It ceased operations May 21 after a somewhat-controversial run in the city.

Besides questioning a $6 million city investment in the service by former Republican Mayor Greg Ballard, some critics took issue with the amount of prime public parking BlueIndy charging stations and cars took up, especially downtown.

The service, which at one time had 92 stations and 200 cars deployed throughout the city, never reached its membership goals. When the Paris-based company backed by French billionaire Vincent Bollore launched in Indianapolis, it predicted that it would be operating profitably by 2019, with at least 15,000 members, 200 stations and 500 cars. As of August, it had just 3,000 active members.

In December, it announced it was pulling the plug on the Indianapolis service and moving the cars to Los Angeles to be used there, although though some ended up at a scrapyard on the west side.

As part of its contract with the city, BlueIndy is required to remove the stations and kiosks, but the city has the option to purchase those assets. The below-ground infrastructure is owned by Indianapolis Power & Light.

Mayor Joe Hogsett said the city has asked BlueIndy to hold off on removing any of the assets until the city makes a decision.

Originally, the city had until August (90 days after BlueIndy ceased operations) to exercise its purchase option, but now has until Sept. 21 to do so. Per the contract, the city must pay the “fair market” value for the assets, which at this time is unknown, city officials said Wednesday.

Hogsett’s administration has been working with personal mobility advocates and Central Indiana Corporate Partnership’s Energy Systems Network to think through possibilities for those assets.

Now, the city is ready to ask the community and others what they believe should happen with the equipment.

Mackenzie Higgins, policy adviser to Hogsett, told the media on Wednesday the RFI will be distributed pretty widely and seeks a wide range of responses for long-range uses.

Hogsett said what happens with the stations and assets will likely be decided on a neighborhood-by-neighborhood basis, but the city is looking for responses that offer more accessibility to mobility and maximize the existing underground infrastructure.

The administration is not considering reverting all BlueIndy parking spaces back to public parking, Hogsett Chief of Staff Thomas Cook said.

Earlier this year, the Indianapolis City-County Council’s Republican caucus introduced a resolution that asked Hogsett to waive the city’s purchase option and return the spaces to public parking.

Many businesses over the years have complained about the BlueIndy stations hurting their business because they occupy prime parking spaces in front of their buildings.

The Republican resolution has not gained any steam with the Democratic-controlled council.