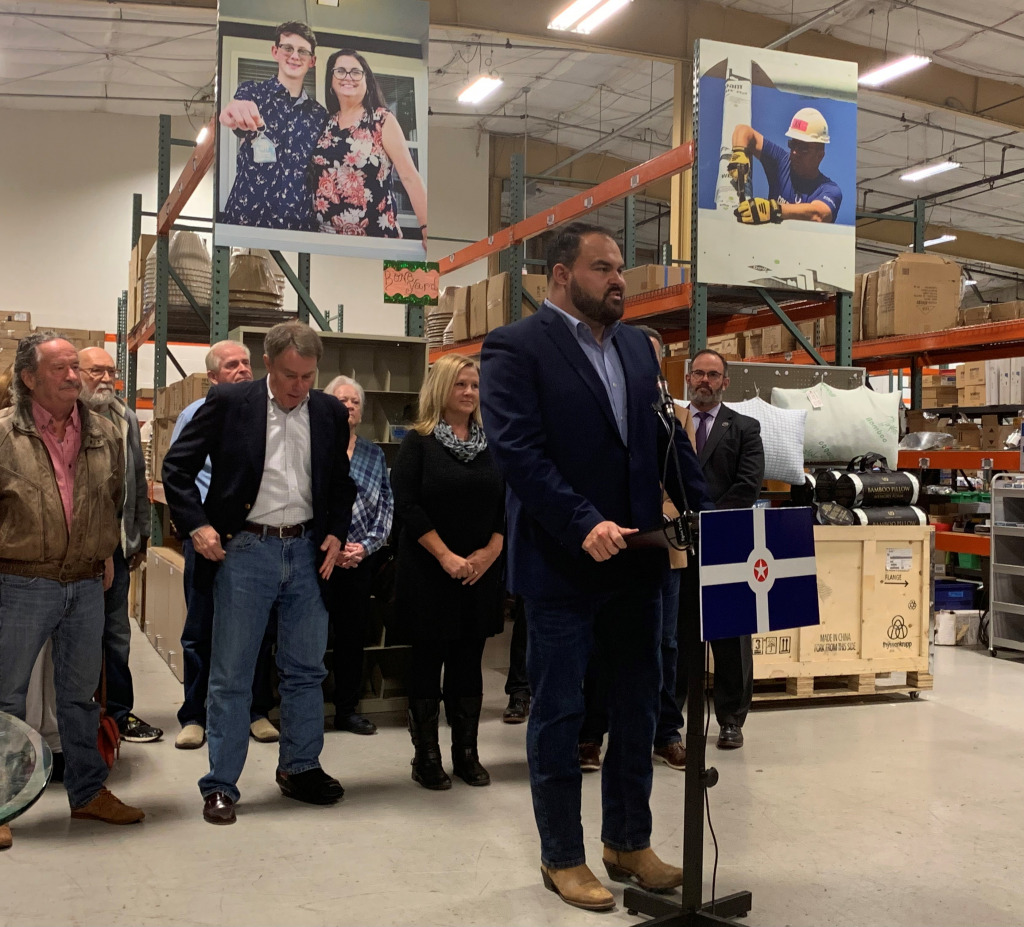 City-County Councilor Jared Evans speaks at the Habitat for Humanity ReStore on West Washington Street about improvements coming to the corridor.

The city announced Monday that $20 million will be spent on improvements to West Washington Street from Holt Road to Lynhurst Drive—making up a portion of the $50 million that IndyGo had promised to spend before an October board decision to alter plans for the Blue Line rapid-transit bus line.

Speaking at the Habitat for Humanity ReStore at 4129 W. Washington St., Indianapolis Mayor Joe Hogsett said the funds will be used for stormwater upgrades, substantial improvements to sidewalks and overdue drainage updates focusing on the Fleming Gardens neighborhood. Streets in Fleming Gardens will be resurfaced, too. The project still tackles a smaller area than the previous IndyGo plan, which would have made improvements as far west as High School Road.

The project is in design, with construction to begin in 2025. Dan Parker, former head of the Department of Public Works, said the design process will be sped up because IndyGo is providing its abandoned design plans for the segment to DPW engineers.

Evans was in Florida vacationing during the time of the Oct. 27 IndyGo board vote that removed the first segment of the Blue Line from Washington Street in favor of an express route on Interstate 70. He released a statement decrying the lack of much-needed assistance to the area’s crumbling streets and sidewalks, which he addressed upon his return in a meeting with Hogsett and Dan Parker, the former head of the Department of Public Works.

Parker said the investment was an easy decision because it likely would have been part of the department’s Capital Improvement Plan if the IndyGo investment hadn’t been slated to happen.

Westside advocates said the investment is a start, but it doesn’t equate to the increased access to transportation and the dollar amount IndyGo was set to give to the area.

Evans told IBJ he fears that those who oppose the Blue Line project will use the announcement as an opportunity to say that the city has always had the money for the infrastructure project without IndyGo’s assistance.

“That’s not really the case, because we’re losing out on roughly $30 million,” Evans said. “Mickleyville [a neighborhood west of Lynhurst Drive] is losing out on a complete project. And I can tell you, we don’t have the money.”

Lisa Bentley, head of Indy Gateway, said the corridor has crumbling sidewalks, or “cowpaths,” which residents have to use to access Route 8, IndyGo’s second-most popular route behind the Red Line. That contributes to a high pedestrian accident rate, she said.

Bentley said she would like to see continued investment through the corridor and state support to fund improvements west of Interstate 465, where Washington Street becomes U.S. Route 40.

Indy Gateway was formed in 2015 to advocate for increased economic development through the West Washington Corridor.

Correction: An earlier version of this story gave an incorrect start date for construction of the West Washington Street improvements. Construction is expected to begin in 2025.