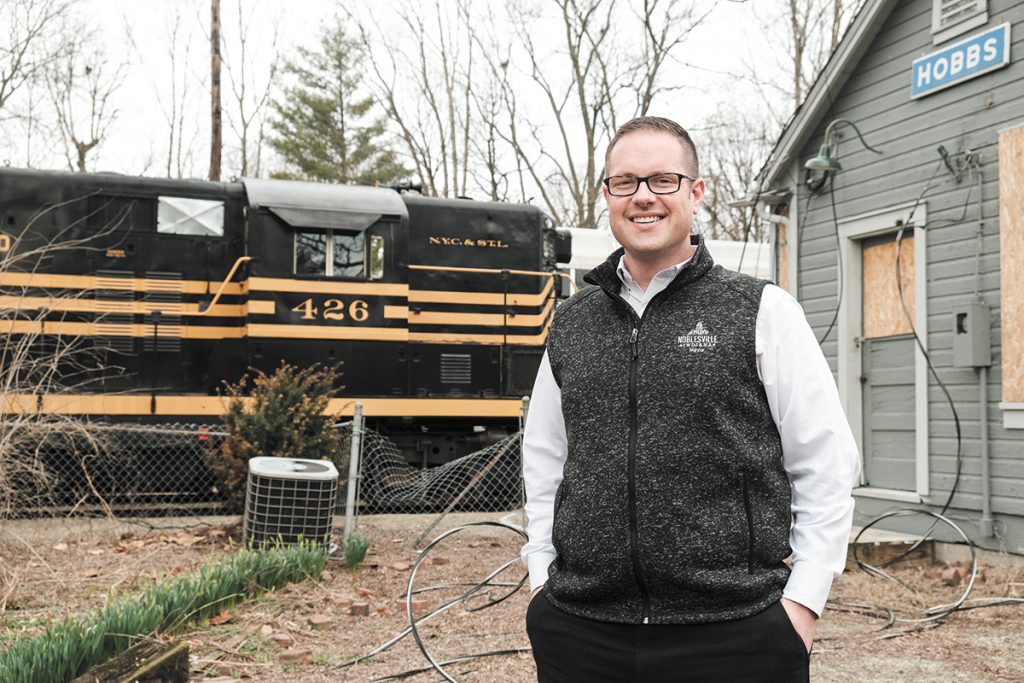 Mayor Chris Jensen says most of the renovation funding will focus on landscaping and hardscape paths, rather than the train station itself. (IBJ photo/Eric Learned)

A planned $1.5 million investment in Noblesville’s historic railyard is designed to draw visitors into downtown, but it also might put the city’s rocky relationship with rail back on track.

Noblesville’s freshman mayor, Chris Jensen, is planning to ask the city council for $1.5 million to revamp the 10-acre railyard in Forest Park. Jensen wants to secure funding this spring, start turning dirt this summer and have the upgraded station open for the city’s bicentennial in 2023.

The investment aims to capitalize on the presence of the Nickel Plate Express, which began running excursions on the 12.4 miles of track between Atlanta and Hobbs Station in Forest Park a year and a half ago.

The rides, operated by the not-for-profit Nickel Plate Heritage Railroad Inc., draw 20,000 passengers a year, a number Jensen believes will increase with a spruced-up railyard. He wants those passengers to stick around and enjoy other amenities in Forest Park and venture into downtown, which is across the White River from the park.

“Hobbs Station can be a central landing point for visitors who may come for the train, but stay for the pool, the golf course, the carousel,” Jensen said.

The focal point of the renovations is the historic Hobbs Station, which was built alongside the Nickel Plate railroad in Tipton County in 1948 and brought to Forest Park by the Indiana Transportation Museum in 1967.

The not-for-profit Indiana Transportation Museum ran passenger trains at that site for more than three decades before the quasi-government entity that oversees the railroad for the owners—the Hoosier Heritage Port Authority—terminated its agreement with the museum in March 2016 amid concerns about the not-for-profit’s financial condition and maintenance of the tracks.

A year later, the city of Noblesville accused the museum of violating the terms of its lease after discovering chemicals had leaked onto the property. The city let the museum’s lease lapse in 2018. 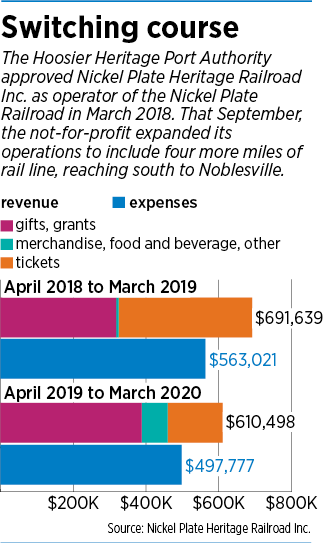 The ouster touched off a legal brawl, with the museum filing two lawsuits against Hamilton County government officials alleging breach of contract, defamation, slander, restraint of trade and tortious interference.

Though litigation continues, Jensen said it’s time to move on and improve the railyard.

“That whole site is in need of a fresh look, a reinvestment,” he said. “Because there has been so much recent contention over this topic, and [because of] how much deep-rooted love there is for the train, now is the time to invest in that and bring on a new chapter.”

Jensen said the $1.5 million in funding could come from new park-improvement bonds, the city’s cash reserves or a combination of the two.

He said that work is just the first of multiple phases of upgrades he’d like to complete at Forest Park, which spans 150 acres. In addition to a nine-hole golf course, miniature golf course and carousel, the park includes a swimming pool, volleyball sand lots, horseshoe pits and playground equipment.

Under the renovation plan, Hobbs Station will remain the centerpiece of the railyard. Most of the $1.5 million will go toward landscaping and hardscape paths, rather than the structure itself, which includes a dispatcher’s office and a freight room.

The money also will cover restroom improvements, historic signs, parking and a covered platform to replace the gravel passengers currently board from.

David Heighway, county historian at the Hamilton East Public Library, said the station has historic features he hopes the city will save, such as the ticket booth that sits near the rail-yard’s main gate. He said it originally was a guard shack that stood where the tracks crossed Logan and Eighth streets and is marvelously maintained. 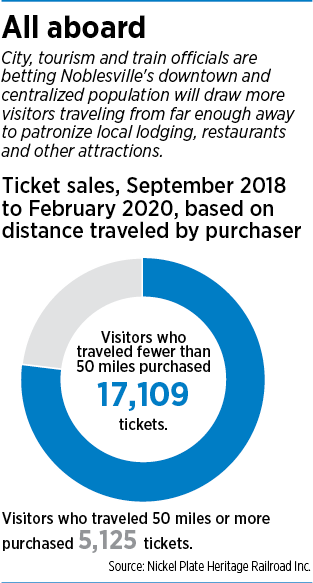 He also fancies an order signal that came from Arcadia’s historic depot. Heighway said dispatchers would communicate with the train’s engine operator in the days before radio by pulling a lever to illuminate the signal.

“This is where we historians diverge from the general public,” he said. “We see things that they might not notice, stuff that has [historical] impact but isn’t dramatic or large.”

Already gone from the railyard is the transportation museum’s equipment, including 78 historic train cars and engines.

A survey Visit Hamilton County conducted showed that tourists are more interested in food- and event-based excursions than in historic trains.

“It doesn’t really represent what happened on that railroad, which is fine,” Heighway said. “But if you did it accurately, people probably wouldn’t have a great time.”

In its first year and a half of operations, Nickel Plate Express Director Dagny Zupin said, the train has had more than 24,000 passengers and brought in revenue of more than $705,000.

Rides are currently suspended because of the coronavirus. When they resume, she expects ridership to get a big boost from Nickel Plate Express’ decision earlier this year to make Noblesville the starting point of the trip, which now runs from Forest Park to Atlanta and back.

Riders “were disappointed to show up to Atlanta and there were no restaurants, no shopping,” Zupin said. “They wanted to make an entire day out of this.”•