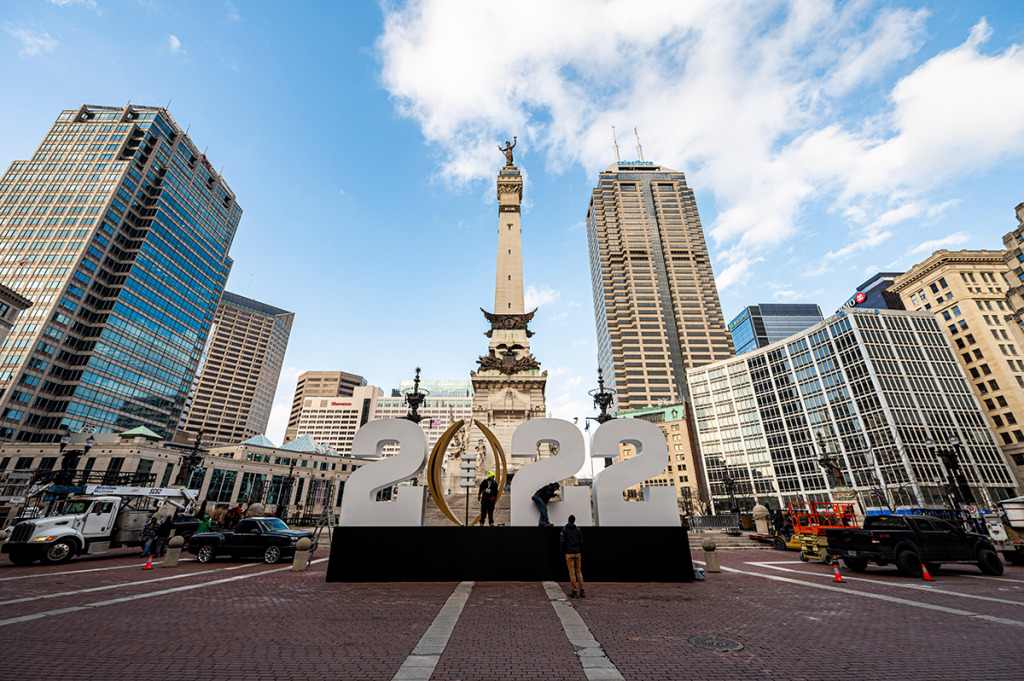 The College Football Playoff generated media exposure for Indianapolis that is worth $34 million. (IBJ photo/Mickey Shuey)

The 2022 College Football Playoff National Championship in Indianapolis generated total sales of $156 million from Jan. 7-10, according to a study shared this week by the event’s local organizing committee.

That number—determined by Maryland-based Rockport Analytics—compares to a $150 million projection the city made in 2017 when it announced the Jan. 10, 2022, championship game and other CFP-related activities that took place over a four-day period.

Despite the pandemic, the original estimate was spot-on, said Susan Baughman, president of the CFP’s local organizing committee.

“We were really pleased to see that much spending … because we really didn’t know going into December [what would happen], because there was an uptick in cases at that time,” she said. ”So I think the fact that we met the expectation that we had before COVID, even after COVID, is the most notable thing about all this.”

The Rockport report said the event’s net impact on the central Indiana economy was $81.4 million. In addition, the College Football Playoff generated media exposure for Indianapolis that is worth $34 million, driven in large part by the 22.6 million people who tuned into the championship game on ESPN.

Commissioned by the local organizing committee, the study found about 56,000 people visited Indianapolis for the game, spending an average of $281 per day.

The game was the first fully-ticketed, national scale event the city hosted during the pandemic, coming about 10 months after central Indiana hosted the majority of the NCAA Division I men’s basketball tournament. That event—hampered by reduced attendance limits and other health restrictions—generated about $47 million in economic impact for the city.

The University of Georgia won its first national championship since 1980, defeating Alabama University 33-18. Nearly 80% of the game’s spectators were from outside of Indianapolis, and about 70% were from out-of-state, according to the report. About 24% of fans came from Georgia and about 10% from Alabama.

The report also said the event:

The study is the result of interviews with visitors conducted by IUPUI and Indiana Sports Corp. volunteers at various Indianapolis landmarks—including Georgia Street, Monument Circle and Lucas Oil Stadium—during the event week, as well as a post-event survey emailed to all championship game ticket holders. The study also relied on geolocation data, hotel data, and information from restaurants and other businesses.

The local organizing committee spent about $14 million to host the event, Baughman said, with most of that coming through donations from individuals and businesses; some of funds funds came through in-kind contributions.

Baughman said the study’s results prove that the College Football Playoff is an event worth hosting for Indianapolis. But she said a future bid will be dictated by the CFP team’s priorities, particularly as it looks to expand the playoff to 12 teams in the coming years.

“There could be an opportunity with the expansion in some way, but I think to bid on the weekend—the national championship—again would be great,” she said. “I think it would be worth seeking it again, and we will have all eyes on those opportunities” moving forward.

Ken McGill, managing director of Rockport and the lead on the study for the firm, agreed.

“To have a return like $156 million, it’s truly not a bad deal—for that reason alone, they might want to consider doing it again,” he said. “It’s a great time of year, too, … a good time to have the hotels raise their occupancy levels, have the convention center more fully utilized, and have the downtown restaurants get a boost in traffic and activity. It’s a pretty good deal.”