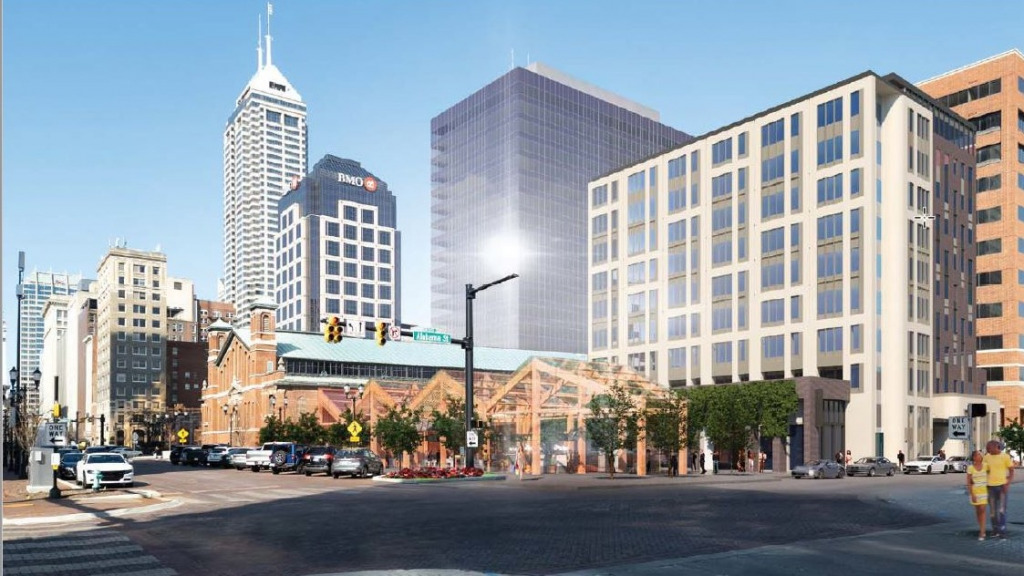 A rendering of the City Market East project. (Courtesy of Citimark and Gershman Partners)

A City-County Council committee passed a group of proposals Monday night to set the stage for the upcoming $180 million City Market East project.

The bonds are expected to repaid with property taxes generated by the project. They are backed by the developers, who would be responsible for any shortfall in taxes collected.

City officials announced in June that they had chosen a joint venture of local developers Citimark and Gershman Partners to revamp the downtown block that includes the Indianapolis City Market and Gold Building, with a heavy focus on bringing more apartments to the city’s central business district.

Construction is expected to occur in two phases. The first phase will include the reskinning and redevelopment of the iconic 20-story Gold Building, which will be subdivided into 340 apartments. It also will entail updating the office building at the southwest corner of Ohio and Alabama streets and an adjacent 530-space parking garage.

The parking garage serves both the Gold Building and the office building and will continue to do so once they are transformed, said Eric Gershman of Gershman Partners. It is also used by visitors of the City Market and City-County Building, but Gershman said no additional parking will be created.

Plans for the street level of the Gold Building include a nearly 6,000-square-foot retail space, a bar or coffee shop, a lounge and a bike room.

Gershman said some adjustments have already begun at the office building at 251 E. Ohio St. Work on the Gold Building will commence in June when the last tenant, the Marion County Public Defender’s Agency, moves out of the building and into a building at the Community Justice Campus in the Twin-Aire neighborhood.

The first phase will receive $12.3 million from the TIF bonds. The Gold Building may be ready to rent out apartments starting in the summer of next year, Gershman said.

The second phase of the project will involve improvements and an expansion to City Market, the demolition of the market’s east wing, and the construction of a 11-story, 60-unit apartment tower in the wing’s place.  The project will include 6,000 square feet of retail space, 8,000 square feet of civic space and 22,000 of curated retail. This phase is slated to  receive $6.5 million in TIF funding.

The east wing was previously the site of the downtown Bicycle Garage Indy location, but the business moved to the Box Factory development in October last year.

“We all know that daytime traffic and daytime downtown looks different than it did pre-pandemic,” Andrews said. “And so similarly, we wanted to think about the City  Market and the surrounding properties and how they will be successful in the future.”

Gershman also said an east-west pedestrian-focused alley would be created out of the former Wabash Street, which would be populated with lights, public art from local artists, and benches. Similar work might be done to the north-south alley between the Gold Building and the parking garage, which is currently a loading zone.

The $180 million price tag increased slightly from the initial $175 million estimate when the city announced the selection of the proposal in June.

The proposals approved Monday will go before the full council on Feb. 7.