Fishers-based Enterprise Payment Systems may be small, but it’s trying to claw its way into the highly competitive market for processing credit card transactions.

The company is the brainchild of five central Indiana entrepreneurs from various industries, who came together in the spring of 2018 to address something nearly as ubiquitous as the use of credit itself: merchants’ frustration about the rates they pay to let their customers swipe their cards.

And although the company is new to the $85 billion industry, EPS now processes millions of dollars of transactions every day for companies across the nation.

CEO Jason Spector said that rather than padding processing fees to make a quick buck, his company is gaining market share by exposing other processors’ practices and putting its clients in control.

“The problem with credit card processors today is that they over-promise, under-deliver, misrepresent and … constantly increase rates,” Spector said. “There’s so much deception within this business, and clients are subject to believe what they’ve been told.”

The company claims that mid-sized businesses with general consumer and business-to-business sales can save money on nearly a third of its credit card transactions by using EPS. Larger wholesale, retail, service or distribution companies might see reduced fees on as many as 90% of their credit card transactions, according to EPS, with an overall annual cost reduction of 16%.

EPS officials say they use a proprietary algorithm that identifies missing or over-generalized information within a credit card transaction. For example, Spector said, other processors will categorize businesses as either a retail establishment, a restaurant or a restaurant with tipping. EPS works with merchants to identify a more accurate merchant classification code that will in many cases have a lower corresponding transaction fee, thereby saving the merchant money.

“If you talk to business owners small and large and you ask them their thoughts on credit card processing, they’ll tell you the same thing: It’s a racket. It’s awful,” Spector said. “We want to empower businesses to gain control over their account receivables in today’s digital world.”

But EPS is slowly managing to cut through the noise. Chief Financial Officer Janine Burkhart said the company is growing. She said year-over-year revenue grew 46% in May, and the company’s income for that month alone topped $1.18 million.

Co-CEO and co-founder Todd Ablowitz said he knows of roughly 900 payment companies currently operating in the United States and acknowledged that what Spector said about the industry’s cloudiness on pricing “is unequivocally true.”

But he also noted that a lot of processors can save merchants money, so what’s really important is customer experience. “If Enterprise is adding value in the sense that they’re creating more data availability and transparency to optimize the cost of acceptance, that can be helpful,” Ablowitz said.

EPS is not Spector’s first company, and it certainly isn’t his first time forging a new path in a technical field.

He was recognized as one of IBJ’s Forty Under 40 in 2005 for having developed Integrated Mobile Technologies, one of the first portable communication device companies in the Midwest, growing Indianapolis-based Van Ausdall & Farrar’s communications division, and for founding the full-service real estate and financial services company, Indiana Mortgage Network.

In 2017, Burkhart mentioned to Spector that her chiropractor was toying with the idea of starting up a credit card processing company with his neighbor in McCordsville.

That chiropractor, Matt Bauer, owner of Apex Therapy, said he had been looking into the fees he was paying for credit card transactions “and it was always kind of clouded. It just didn’t seem like it was an efficient process that was very clear to me as a business owner.”

“When you look at a business and realize there is something missing, then you realize you have friends and colleagues that are sharing similar stories, there’s a problem within that,” Bauer said.

The two worked with Spector to come up with a system, then tested it at their respective businesses. Bauer said he saw immediate benefits from EPS’ ability to plug in information that reduced his credit card transaction fees, and from the hours saved by using EPS’ automated software.

Bauer and Prefontaine soon after signed on as the chief operating officer and president of EPS, respectively, and Prefontaine brought his human resources director, Matt Tyner, with him as the company’s chief strategy officer.

Burkhart, who’d previously worked in public accounting with Somerset CPA Group for 10 years, is a consultant at Indianapolis-based LightSource of Indiana, a commercial lighting manufacturer’s representative, in addition to being the EPS chief financial officer.

But she wasn’t necessarily an evangelizer for EPS. She even had doubts about mentioning the company to her commercial lighting clients.

“I had quite a bit of hesitancy and skepticism, just because I recognize how clouded the credit card industry is,” Burkhart said.

But, when Jon Martin, the chief financial officer at Tom Wood Automotive Group, mentioned he was having trouble with his processing company, she made the recommendation.

“Tom Wood has been a [commercial lighting] client of mine for eight years and they’ve built a lot of dealerships,” Burkhart said. “I thought, ‘This is either going to go really well, or it’s not going to go at all.’ When it was absolutely a home run after 90 days, I knew we were on to something.”

Martin said he’d heard a friend in the credit card processing industry describe it as dirty, deceptive and deceitful.

“When you get a quote from a processor, it’s difficult to know what you’re looking at. Things can be manipulated in the numbers,” Martin said. “That’s one frustration that I’ve experienced over the years of purchasing processing services—not having confidence in knowing what you’re getting.”

Martin even tried using a friend’s processing company at a couple of Tom Wood’s locations, but he found the service was spotty and unreliable.

That wasn’t the case with EPS. 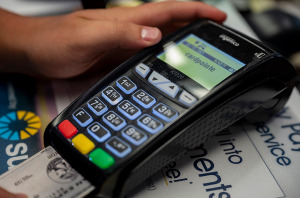 “In the probably two years that we’ve been with EPS, I can’t think of a time when we got a call from one of our people to say this credit card transaction won’t go through,” he said. “EPS just works. It’s super reliable.”

Martin said his experience with typical credit card processing companies is that they pad what’s called an interchange fee—the amount paid by the merchant’s bank to the customer’s bank for facilitating the credit card transaction—to generate profits.

Martin said the difference is not radical, but he called EPS’ rates competitive. And that’s only grown more significant now that Tom Wood uses the system at about 70% of its locations.•