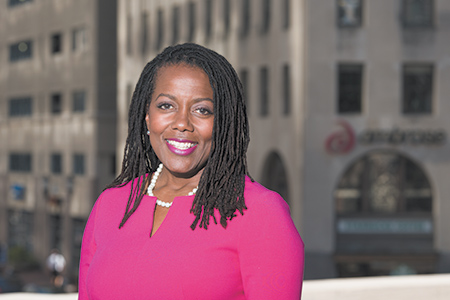 Angela Smith Jones, deputy mayor for economic development for Indianapolis since 2016, is leaving mayor’s administration to join Health and Hospital Corp. as the vice president of diversity and inclusion.

The mayor’s office said Smith Jones was integral to the creation and implementation of the city’s Roadmap for Inclusive Economic Growth. She also facilitated the first city contract disparity study in 25 years.

“Over the last four years, Angela has served as an enthusiastic ambassador for Indianapolis and a constant advocate for workers, businesses, and the ecosystem of local industries,” Mayor Joe Hogsett said in written remarks. “Her leadership helped to shape our city’s skyline and grow our global reputation; she also helped foster the growth of Indianapolis’s marketing tech sector during that span. I am grateful for the opportunity to continue working with her in her new capacity at HHC.”

Before joining city government, Smith Jones served as general counsel and director of policy and legislative affairs during a five-year stint with the Indy Chamber.

Prior to that, she spent 11 years as director with the Indiana Professional Licensing Agency.

Smith Jones serves on the boards of Employ Indy, 16 Tech Community Corp. and Innovation District, the IUPUI Board of Advisors, and the Stanley K. Lacy Advisory Board.

Smith Jones was named a Woman of Influence by IBJ in 2017.

“We are so fortunate that Angela is joining the Health and Hospital Corp.,”  said outgoing HHC  chief executive Matthew Gutwein in written remarks. “Angela is an extraordinarily talented person and deeply committed public servant. She brings to this critical role a wealth of experience in government, the community and the private sector.”