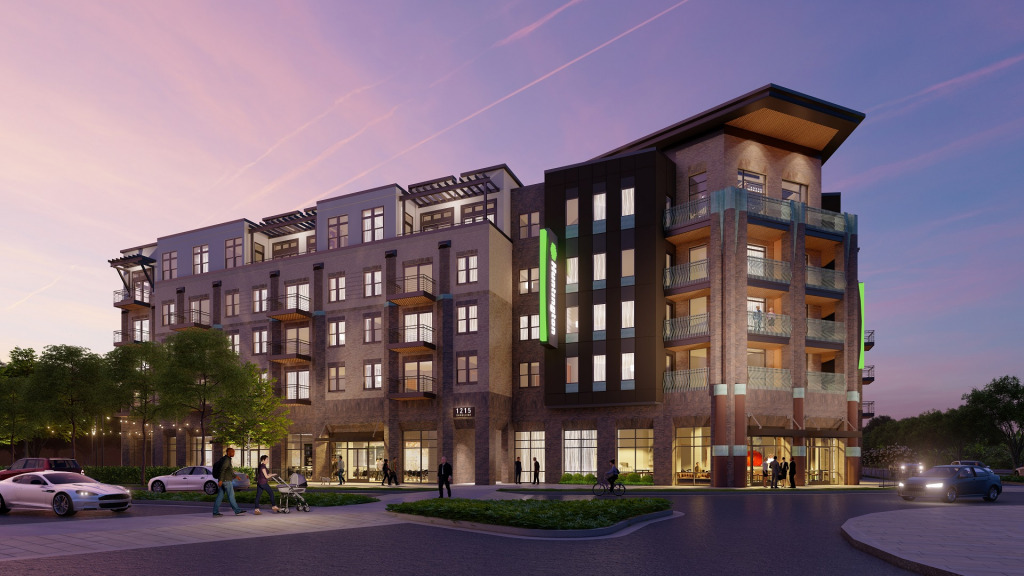 Developers are planning a $29 million second phase of the Proscenium in Carmel. (Rendering provided by Woolpert Inc.)

A pair of developers on Friday morning announced a second phase for the Proscenium complex in Carmel, adding to its current mix of condos, apartments, office space and restaurants located a few blocks south of Carmel City Center.

The $85 million first phase by Carmel-based Birkla Investment Group and Dayton, Ohio-based Woolpert Inc. was completed in 2021 on the northwest corner of South Rangeline Road and West Carmel Drive.

Birkla and Woolpert said Friday that the $29 million, five-story second phase at 1215 S. Rangeline Road would include 48 rental units and seven penthouse condominiums, 16,000 square feet of ground-floor space for restaurant and office uses, and a 120-vehicle multi-level parking garage.

Woolpert Director of Design Tony Martin said in a media release that the second phase would be harmonious in style and scale with the existing Proscenium complex.

“The continuity will be in the higher-end, live-work-play development style, in which each site is able to stand on its own and benefit from shared features and amenities like a swimming pool, workout space, green space, additional parking, etc.,” Martin said in the release. “This project continues the densification and walkability of Carmel’s downtown.”

The project is expected to take place on the site of a former Walgreens store that Birkla has used as offices for the Proscenium project. The new project still needs to go through an architectural review process by the city, according to Carmel Redevelopment Commission Executive Director Henry Mestetsky.

The developers expect it to be ready for occupancy in summer 2023. Indianapolis-based Lynch, Harrison & Brumleve Inc. will provide structural engineering for the project.

The Proscenium is located on a seven-acre lot on the northwest corner of South Rangeline Road and West Carmel Drive.

The city of Carmel purchased a Party Time Rental warehouse in 2009 and an Arby’s property in 2017 for a combined $6.2 million. The city partnered with Carmel-based developer Novo Development Group—whose holding company is Birkla Investment Group—to work on making the Proscenium a reality on the sites.

The project’s first elements—a 100,000-square-foot Agora at Proscenium office building and a 600-space subterranean parking garage—opened in the summer of 2020.