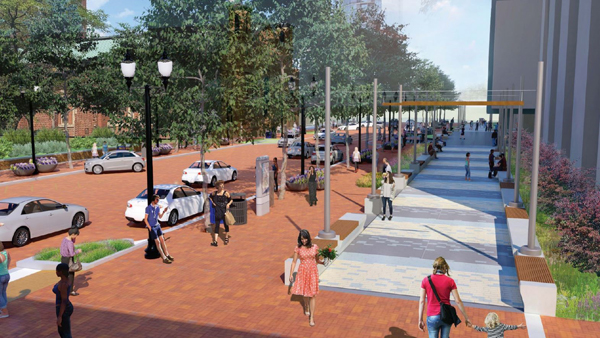 When completed, the reconstructed section of East Market Street between Delaware and Alabama streets will include a pedestrian promenade on the south side of the street by the City-County Building. (Image courtesy of the city of Indianapolis)

A heavily-trafficked portion of East Market Street is expected to be closed for at least eight months, starting in March 2020, as part of a $6 million road improvement project by the Indianapolis Department of Public Works.

DPW said it will close Market Street between Delaware and Alabama Streets until November 2020 to perform a “complete reconstruction of the roadway.”

The project—part of a larger effort by DPW to improve downtown pedestrian and street infrastructure—will “improve the roadway and ADA-compliant accessibility of the sidewalks, curb ramps and crosswalk.”

The reconstruction will add a raised pedestrian crossing between the main street-side entrances of the City-County Building and the City Market, which are located on opposite sides of Market. It will also add curb bump-outs that will condense traffic lanes. The street will still allow parking, offering parallel and angled spaces.

The construction is also expected to introduce a pedestrian promenade on the south side of the street by the City-County Building, along with new benches and bike racks.

The farmers market that normally takes place in that section of Market Street will be temporarily relocated, although a new spot has not yet been finalized.