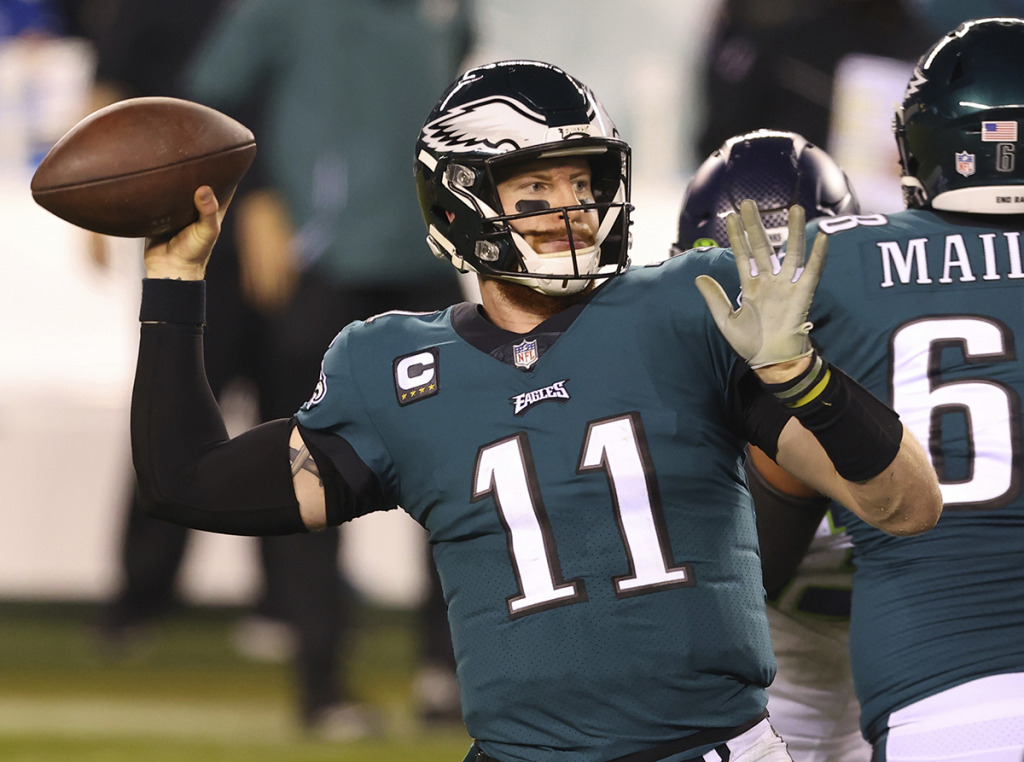 The Philadelphia Eagles have agreed to trade Carson Wentz to the Indianapolis Colts, according to a person familiar with the deal.

The Eagles will receive a third-round pick in this year’s draft and a conditional second-round pick in 2022 that can turn into a first-round pick if Wentz plays 75% of the snaps this year or 70% and the Colts make the playoffs.

The person spoke to The Associated Press on condition of anonymity because the deal hasn’t been announced.

Wentz is coming off the worst season of his five-year career and was benched for rookie Jalen Hurts after 12 games. He finished third in NFL MVP voting in 2017 when he led the Eagles to an 11-2 record before a knee injury ended his season and Philadelphia went on to win its only Super Bowl title.

The deal reunites Wentz with Colts coach Frank Reich, who served as Philadelphia’s offensive coordinator his first two seasons in the league. The Colts are turning to their fourth starting quarterback in Reich’s four years. Andrew Luck retired abruptly before 2019 season and Jacoby Brissett took over. Philip Rivers led the team to the playoffs in his only season in Indianapolis in 2020. After Rivers retired, Wentz became an ideal fit for the team.

Brissett is about to become a free agent and the only other quarterback on the roster is Jacob Eason, who never took a snap last season as a rookie.

“Let’s get to work!!! Welcome to Indy! Can’t wait to see what the future holds in the 317,” two-time All-Pro linebacker Darius Leonard wrote on his social media account, citing the city’s area code.

Wentz is entering the first season of a four-year, $128 million contract he signed in June 2019. The Eagles will absorb a significant salary cap hit of $33.8 million in dead money on their 2021 cap. Indy started the offseason with the second-most room under the projected cap.

The Eagles traded up twice in the 2016 NFL draft to select Wentz with the No. 2 overall pick. He started all 16 games as a rookie and had a breakout sophomore season before he tore two knee ligaments in Week 14 and watched Nick Foles lead the Eagles to a Super Bowl win over New England.

A back injury ended Wentz’s season early in 2018 and Foles led the Eagles to a playoff victory.

Wentz started every game in 2019 and helped the Eagles win the NFC East with an excellent four-game stretch in December. He became the first NFL quarterback to throw for 4,000 yards without a wide receiver having 500 yards receiving and became the first to throw 20 or more touchdowns and seven or fewer interceptions in three straight seasons.

But he was knocked out of his first career playoff start after nine snaps because of a concussion. Wentz hasn’t been the same since that hit from Jadeveon Clowney. He posted a 72.8 passer rating, 16 interceptions and lost four fumbles in 12 starts in 2020. The Eagles finished 4-11-1.

The Colts are betting Wentz will rebound with a new team, which looks like a solid fit for the former North Dakota State star. After losing at Buffalo in the wild-card round last month, general manager Chris Ballard made it clear Indy’s top offseason priority was finding a long-term solution at quarterback.

Some speculated about what the Colts would do in free agency or potentially move up in the draft. But Ballard was reticent about being pressured into a rash decision, giving away too many picks or overpaying.

“We get the importance of the quarterback position but the difference between just taking one and taking the right one is the key in our minds,” Ballard said. “It’s something we want to get fixed. Look, when you think about two of the top franchise quarterbacks since coming to Indianapolis —Peyton Manning and Andrew Luck—they were No. 1 picks. I promise you if we’re picking No. 1, I’m not going to be here talking about it.”

Wentz also will have a better supporting cast in Indy.

The Colts offensive line, led by three-time All-Pro guard Quenton Nelson and center Ryan Kelly, is one of the league’s top units. Jonathan Taylor became the fifth rookie in Colts history to top the 1,000-yard mark and Indy has a promising group of young receivers and tight ends still under contract. Four-time Pro Bowl receiver T.Y. Hilton and starting running back Marlon Mack both could become free agents.

And Ballard believes Reich is a master of quarterback development.

“I think Frank is outstanding, I think he’s proven it,” he said during his season-ending news conference. “In Philly, he did a really good job with their young quarterback. Here, he’s had three different quarterbacks and he’s done well with all three.”