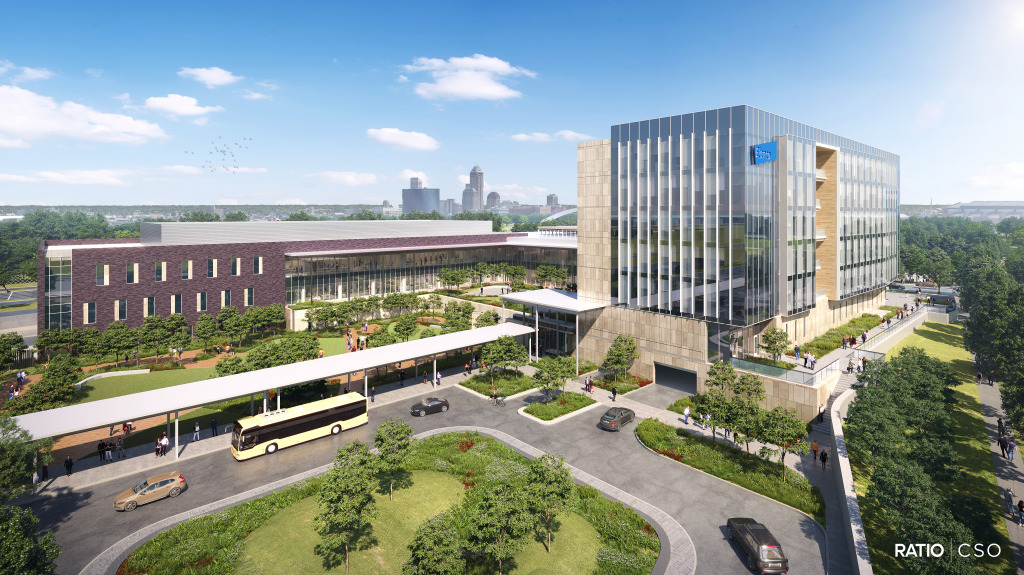 Elanco Animal Health is working with Ratio and CSO architects on its headquarters campus at the former GM stamping plant. (Rendering by Ratio and CSO, courtesy of Elanco)

More trees. More windows. A dozen or so bicycle racks.

Elanco Animal Health Inc. should address those items before winning city approval to start construction on its  proposed, new $100 million-plus global headquarters at the former General Motors Stamping Plant site just west of downtown Indianapolis, according to a staff report by the city’s Metropolitan Development Commission.

The Greenfield-based company will lay out its headquarters design Thursday before a hearing examiner, who will rule on the project. The new headquarters has received wide support from city and state officials, including Mayor Joe Hogsett and Gov. Eric Holcomb.

Elanco plans to build a six-story, glass-faced office structure on 35 acres, in a huge project that will include attached laboratory, collaboration buildings, a three-story parking garage, and an outdoor event lawn and courtyard building.

The project is billed as the initial phase of a mixed-use development on the 93-acre site, and could include offices, commercial retail, restaurants, hotel, multi-family dwellings, flex manufacturing and state park use, according to a 42-page report prepared by the Metropolitan Development Commission staff.

The company, formerly part of drugmaker Eli Lilly and Co. before spinning off as an independent company in 2019, broke ground in April for the new headquarters.

Elanco announced plans to build on the former GM site more than one year ago after being wooed by city and state officials. The company said it plans to put at least $100 million of its own money toward the project.

The city has committed about $135 million in tax-increment financing bonds, approved in July by the city’s Metropolitan Development Commission. About $64 million of that TIF package will go to Elanco via a project fund, with $51 million going toward public infrastructure improvements and another $20 million used for financing and debt.

The Metropolitan Development Commission’s staff has recommended that the project be approved, on the condition that Elanco address the following items:

A company spokeswoman said that “no material changes” are expected in the design unveiled at the groundbreaking, and the company expects to begin construction before Nov. 1.

“We’re still focused on designing and constructing a global HQ which will be fit … for a flexible workforce with emphasis on innovation and collaboration,” spokeswoman Keri McGrath wrote in an email.

In addition, she said three-quarters of GM’s former crane bay has been removed from the site. The White River State Park plans to transform the remaining one-quarter portion into an event center, she said.

The Metropolitan Development Commission is scheduled to rule on the headquarters project on Oct. 5.

The city will build all the internal roads on the campus, with a year-long construction schedule slated to begin in November. It will also pay for a new Henry Street Bridge, connecting the campus to the larger downtown area. Construction on that project is expected to run from July 2023 to November 2024.