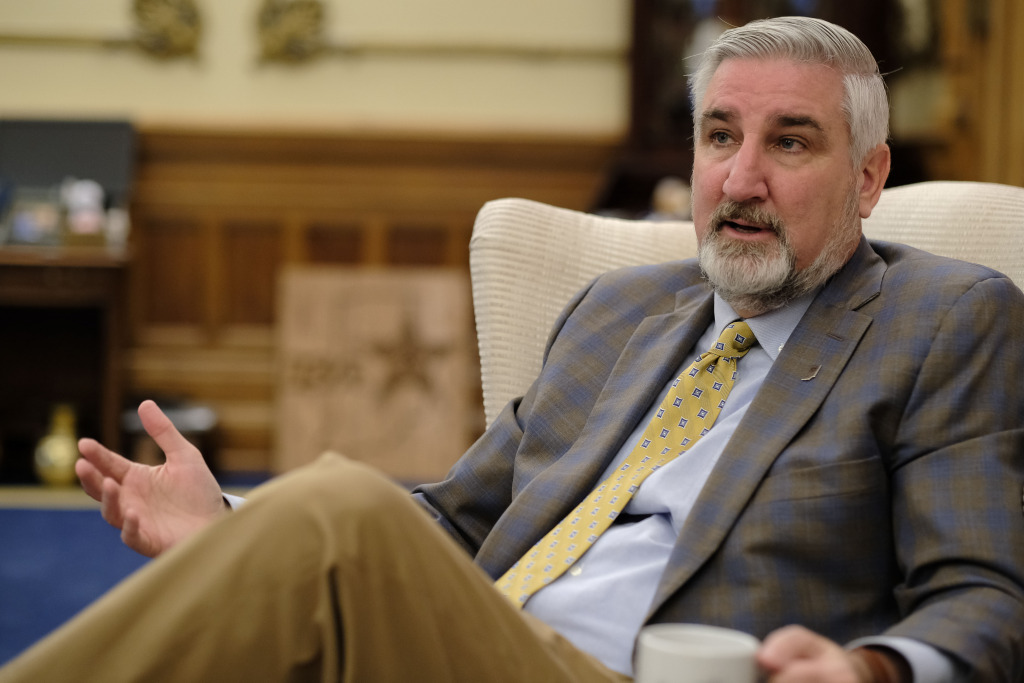 Gov. Eric Holcomb sits down to discuss the economy, his priorities for the upcoming legislative session and what he wants to accomplish during his last two years in office (Eric Learned/IBJ photo).

Republican legislative leaders have been urging caution on new spending since a new economic forecast this month predicted a mild recession next year, but Gov. Eric Holcomb remains hopeful that his legislative priorities can be funded.

Holcomb, also a Republican, said he wants to see what the next forecast in April shows that the state can afford, as he pursues a legislative agenda focused on economic development, education, workforce development and public health. Lawmakers will meet over the next four months to craft a new two-year state budget, and the April forecast will come just as the Republican-dominated Legislature prepares to finish its work.

The December forecast predicted Indiana will see about $600 million in new revenue in each of the next two budget years, plus about $367 million in the current budget year. GOP legislative leaders say much of that will be eaten up by inflation-driven construction cost overruns, Medicaid expenses and a desire to increase funding for K-12 and other legislative priorities.

Holcomb’s budget director Cris Johnston has said he believes the state’s revenue will still provide an opportunity to consider the governor’s policy priorities.

Holcomb recently sat down with IBJ’s Peter Blanchard to discuss the economy and what he wants to accomplish during his last two years in office. (He is term-limited from seeking a third consecutive term in 2024.) Here’s what he had to say, with edits for clarity and brevity.

The most recent economic forecast predicts a mild recession and near-zero GDP growth next year. I’m wondering if you think the potential economic downturn is going to hinder your goals for this upcoming budget session?

That’s the right question, and a sober one to ask, especially after coming off the year we just had. In terms of [private company] capital investment, this year was a smashing success: $22.2 billion compared to our previous record of $8.7 billion. The [economic development] deals that we track on a daily basis, that pipeline, is still very robust. Every day I wake up and wonder, “Will that slow over the course of the next six months?” It hasn’t to date, so we’re extremely optimistic about our year ahead. This was massive momentum, and when you look at capital investment, population growth, employment, these are three key areas where we kind of jump off the Midwestern map in terms of our competition. We’ll have to live within our budget. The one forecast that will be as important or more important, quite frankly, is the April 15 forecast. We’ll see over the course of the next few months how consumer spending, investment, inflation are performing, and we’ll be just as nimble as we were two years when we crafted that budget. The levels may change according to the April forecast. To answer your question more directly, we’re going to address the key areas. We’ll look at economic development, education, workforce development, public health and wellness, and personal and community development. Those five pillars are true yesterday, and they’ll be true tomorrow, and our investments will reflect that at whatever level we’re able to afford.

Earlier this year, your Public Health Commission recommended a $240 million annual funding increase to improve Indiana’s public health system. Do you plan to include the full amount in your budget request?

That’s the case we’re making. It won’t be the first year—it was never gonna be that. The commission took on this in-depth, deep dive conversation into how our local public health services are administered. When you take on something that’s been the same way for over a century, regardless of what recommendations you have, they’re going to take some time to implement and become aligned, and to figure out how many local communities or health departments want to participate and take part in this potential state investment. The $240 million which we arrive at ultimately won’t be that in the first year, but we will seek to get there as soon as we realistically can, and that will require figuring out the local governance issue, the operations and certainly the funding itself. It comes down to math and the workforce. How do we get more people into the labor force? That means folks who are incarcerated today, folks who are struggling with addiction and other health issues. Health is wealth, and we’ll need to make appropriate investments. But just throwing $240 million at it, that’s not the purpose. There’s got to be accountability and transparency, and that’ll all be part of this hopefully continued partnership with local health departments.

You’ve said you want to do another round of funding for the [regional] READI grant program. What are you planning to recommend?

There were a number of worthy projects in the first round that were funded with that $500 million. We know there’s a long list of projects out there, and so we’ll certainly be seeking a READI 2.0 with state funding. The federal dollars in the first round actually slowed down some of the process during round one of READI. That won’t be the case this time. This will be state dollars.

Lawmakers passed legislation earlier this year to allow the Indiana Economic Development Corp. to establish Innovation Development Districts. Do you expect the LEAP [economic development] district in Boone County to get that designation, and are there other areas of the state you could see getting that designation?

Yes, of course it’s tethered to and dependent upon local will and commitment. This isn’t the state coming in and buying all of the property and owning it. A lot of other states, our competition, are pursuing this thinking—having a canvas that you can paint according to what sector or what type of business you want to attract. The LEAP district between the Indianapolis Airport and Purdue University has all kinds of advantages, but think about every other corridor, between the hub in the capital city, or an international airport in Chicago and our northwest quadrant, or Cincinnati, or Louisville, these are real advantages for our state, and then having the number one infrastructure-rated program—roads, bridges, broadband internet, every which way we connect—this puts every region of our state in a good position. If there’s local will and coordination, I can think of multiple potential sites, but it will be driven in partnership, and there are those who are contacting us asking, “How do we get ours?”

The Indiana Economic Development Corp. is considering a 35-mile pipeline to transport 100 million gallons of water per day from the Wabash River in Lafayette to support the LEAP District and the future water needs of central Indiana. Do you have any concerns about the cost of this project or how it might affect the Wabash River?

You have to look at every project in its totality and all the ramifications it might have. One of the advantages that Indiana has is our access to water. When a company is looking to go anywhere in the world or the country, whether it’s Arizona or Indiana, water is key. But you can’t just rob Peter to pay Paul. Every action has an equal and opposite reaction. So the IEDC will be very mindful of water and energy sources and will work with the local community to make sure we’re aligned, not just in our goal but in our execution of realizing that LEAP district.

Do you plan to endorse a candidate in the 2024 governor’s race?

My thinking and approach—and it’s the same about this as in the past—the job that I have is the most important thing to me, and that, quite frankly, right now, will be consuming all of my time, has to do with policy for the state of Indiana, not politics. These elections seem to creep up sooner and sooner every election. This is two years off, and I was involved in an election before my own that was a 16-month campaign that seemed like an endless march toward Election Day. This is longer than that. We’ll have a mayoral election before we ever get to that, so I don’t feel any rush to get politically involved, especially while I’ve got my eye on the ball and a budget session that’s going to have huge ramifications down the road, long after I’m gone. I want to make sure we get that right.

Then, whether it’s a candidate for Congress, dog catcher, governor, president, Senate, vice president, I’m gonna look at what their plans are and their policies. One thing that kind of wears on me is where rhetoric actually meets the road. It’s good to say you’re for something or you are something, but what have you done and how are you going to take us to where you say you want to go? Every year, that’s what we do. We roll out our agenda and everyone else can hold us accountable for that. On the federal level, what we have done about immigration reform? What have we done to reduce the national debt? These things affect Indiana in some form or fashion, so whether it’s state or local or federal, that will be the next thing that I start to pay attention to. Who’s got the plans to keep this culture of always trying to improve, always trying to take it to the next level? If we’re 48th, how do we get to 38th or 28th? I want people to break our records, but you’ve got to have a plan to do it.