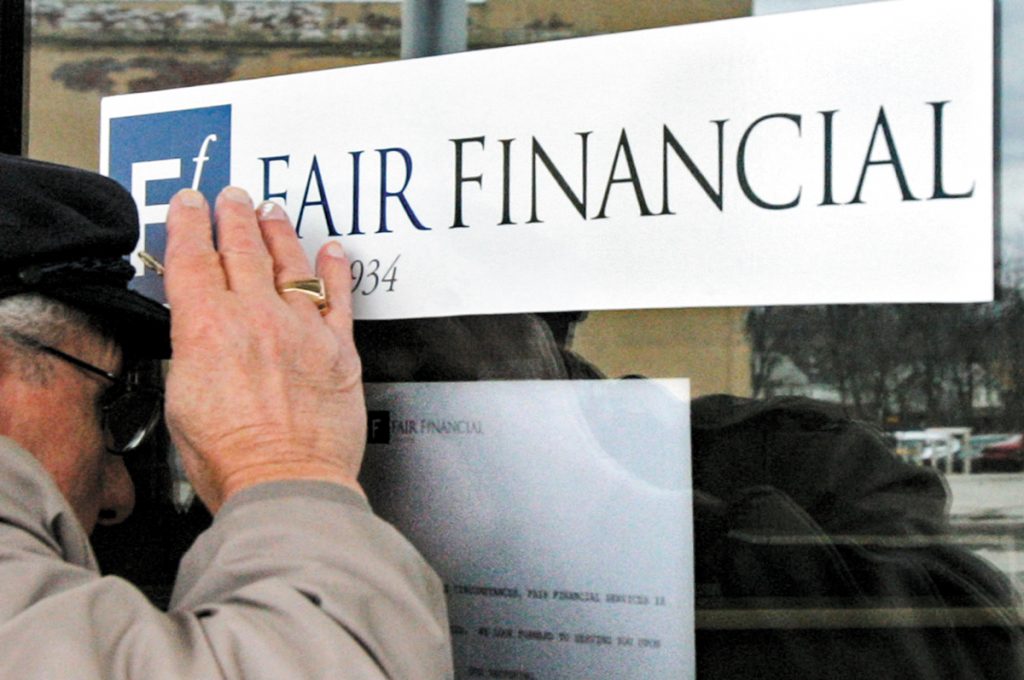 Fair Finance investors on Dec. 7, 2009, found doors locked at the investment firm’s Akron, Ohio, headquarters. More than a decade later, investors have received only pennies on the dollar for their losses. (Photo courtesy of the Akron Beacon Journal)

The bankruptcy trustee seeking to recover millions of dollars for victims of Indianapolis businessman Tim Durham’s Ponzi scheme has come up empty in a nearly decade-long lawsuit against a deep-pocketed lender he alleged was culpable in the fraud.

Tuesday’s federal jury verdict in Cleveland in favor of the Rhode Island-based Fortune 500 firm Textron Inc. was a huge setback for Trustee Brian Bash and the 5,200 mom-and-pop Ohio investors who lost more than $200 million when Durham’s Fair Finance Co. collapsed in 2009.

Bush and his legal team did not respond to requests for comment on the verdict, which came after a two-week trial. However, in an email to one of the investors, Bash said he would appeal.

Textron confirmed the verdict but offered no comment. While the case was rife with emotion, the company’s defense had turned on a technical issue involving whether it established a new lien on Fair Finance’s assets during a 2004 refinancing.

The case Bash filed in 2012 against Textron, which provided financing to Fair from 2002 to 2007, was the only major lawsuit remaining among the more than 140 filed by Bash in a quest to reduce losses for the more than 5,200 investors who bought $208 million in unsecured investment certificates, known as v-notes, from Fair that were never repaid.

The stakes could hardly have higher in the litigation, which charged that Textron saw evidence of Durham’s fraud but looked the other way because its lending relationship with Fair was highly profitable and, unlike noteholders, it held liens protecting it from losses.

The jury verdict leaves investors with an underwhelming recovery—just 11 cents on the dollar, based on distributions of $18 million in December 2015 and $5 million in October 2017.

One of the victims of the fraud, James Coco, a certified public accountant in Medina, Ohio, said he was dismayed that Bash lost after such a protracted legal battle.

“I’m extremely disappointed, after all these years and expense,” he said. “At this point, we are basically left with mere pennies on the dollar.”

Some investors have grumbled for years about the legal fees racked up by Bash and his legal team, even as many of their lawsuits yielded disappointing recoveries.

The attorneys have won approval for more than $28 million in legal fees and expenses, with millions more approved and not yet paid.

Textron is one of two lenders Bash sued eight years ago, charging they stood idly by as Durham drained tens of millions from Fair in the form of loans he never repaid.

The biggest settlement was with the other lender, New York-based Fortress Credit Corp., which began the lending relationship in 2007, after Textron was paid in full. Fortress in 2015 anteed up $35 million.

A judge in 2012 dismissed the case. But four years later, an appellate court reinstated it. In September 2018, federal Judge Patricia Gaughan dismissed a civil conspiracy claim but let a fraudulent transfer claim stand.

At issue with the fraudulent transfer claim was whether a lien Textron placed on Fair’s assets in 2002, when the lending relationship began, was extinguished and replaced when Fair negotiated a new agreement in 2004 on a $17 million line of credit. The verdict indicates the jury decided the 2004 agreement did not create a new lien.

However, if a new lien was established in 2004, it no longer would have that good-faith protection, according to attorneys for Bash. That’s because Durham’s fraud by then was well under way and Textron knew or should have known about it.

Bash’s lawsuit quotes from an internal Textron email from November 2003 in which Senior Vice President Ralph Infante expresses concern that Durham’s use of v-note sales as “a piggy bank” to fund losses at his other businesses was “wrong.”

The same email indicates that Textron’s credit committee was concerned that “us knowing” that v-note sales were being used for purposes other than funding Fair’s operations “could come back to haunt us.”