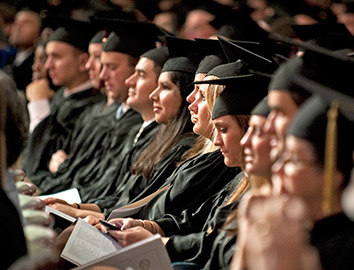 Overall fall enrollment at colleges across the state of Indiana stayed about the same this year, but the number of students attending those schools over the last five to 15 years is on a downward slide.

That’s according to data released Thursday by the Indiana Commission for Higher Education. The college attendance numbers reflect student enrollment at public institutions in Indiana at the start of each fall semester. The latest data captures enrollment numbers for the current academic year, which started in August.

Overall enrollment at public colleges and universities in Indiana increased 0.1% this fall, for a total of 239,943 degree-seeking undergraduate and graduate students. In 2021, the ICHE reported 239,799 students were enrolled in state schools. 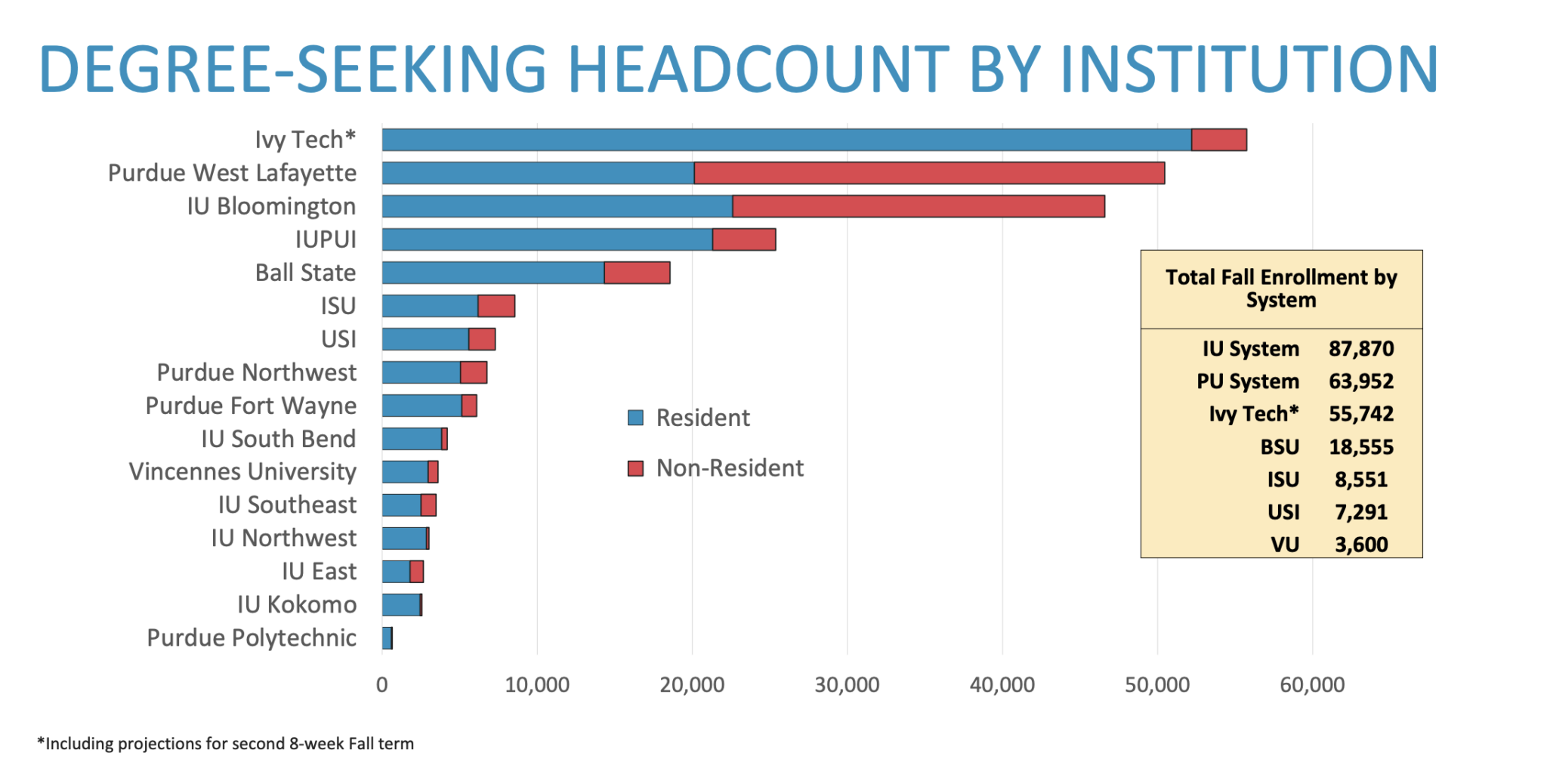 Only half of Indiana’s 2020 high school graduates pursued some form of college education beyond high school, according to an ICHE report released earlier this year. The drop marked the state’s lowest college-going rate in recent history.

The state’s higher education officials point to overall college enrollment declines in Indiana that trend back more than decade. They opine the low enrollment has been caused by “numerous” factors. In the last two years, that largely includes the COVID-19 pandemic, which led many students to delay or steer away from college classes altogether.

Now, education officials are continuing to focus on how the state can meet Gov. Eric Holcomb’s goal of having at least 60% of adult Hoosiers with a quality degree or credential beyond high school by 2025. Currently, that number is just over 48%, leaving a majority of Hoosier adults without a credential beyond a high school diploma.

“[The state’s overall education attainment goal] is really to make our economy tick, and whether it’s those certificates, associate degrees, bachelor’s degrees, master’s, PhDs — we’ve got to do better on each of those levels,” ICHE Commissioner Chris Lowery said Thursday during a commission meeting. “And part and parcel to that, it’s going to include the college going rate, how we’re working with and serving adults better, how we’re working to retain such incredibly talented graduates here in Indiana, and doing so in the most cost effective manner that I believe our institutions have already set the bar on.”

The new ICHE data shows undergraduate headcounts in Indiana are down 0.1% this year from 2021.

In the last five years, the state’s public higher education institutions have seen a 12.1% dip in undergraduates, equal to 27,000 fewer students. 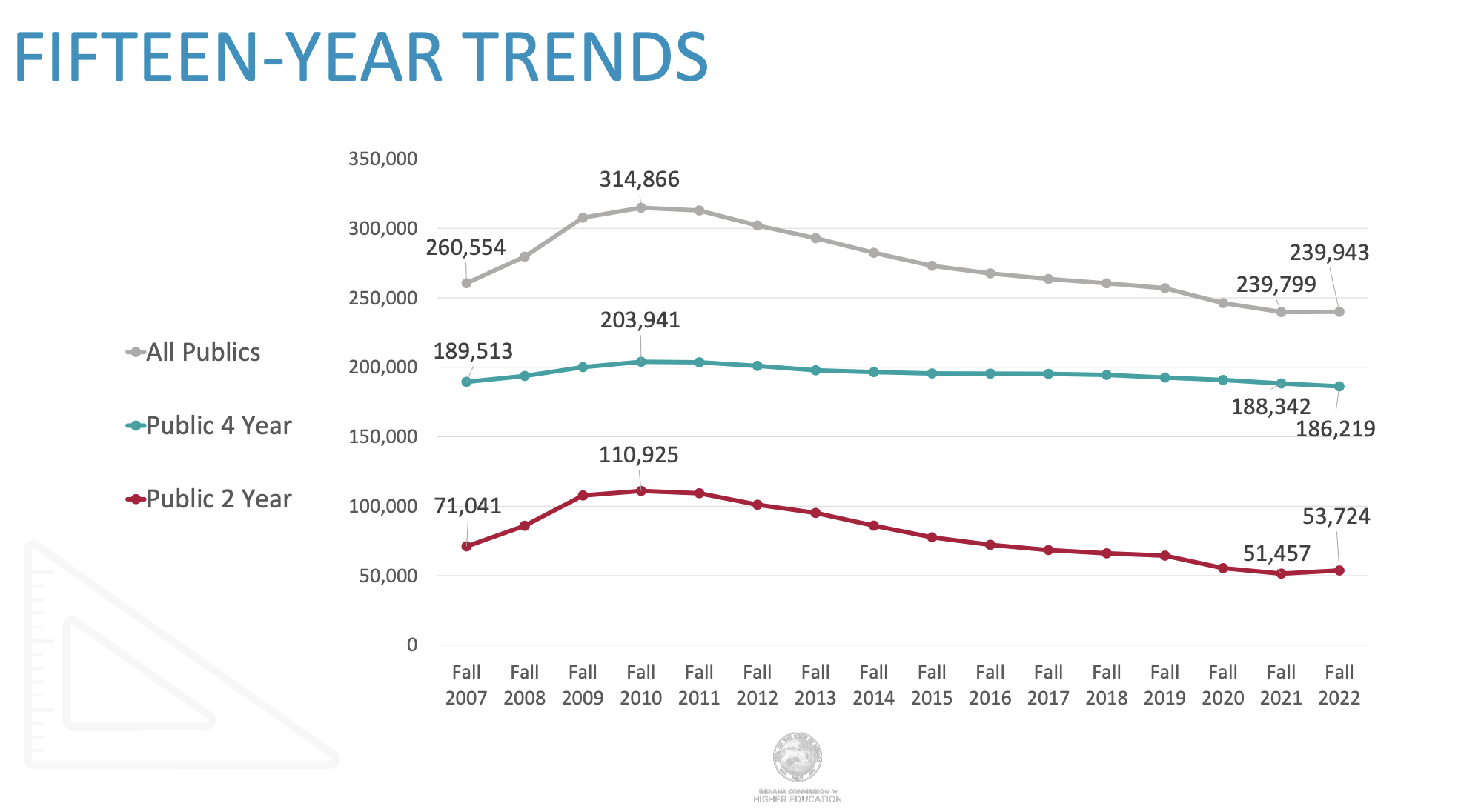 At the same time, however, a greater number of non-resident undergraduates are attending Hoosier schools.

Compared to five year ago, Indiana public colleges and universities report 7% more students from different states or countries – that’s an increase of 3,000 undergrads. Non-resident graduate student numbers are also on the rise. Graduate student headcounts are up 18% since 2017, equal to 4,000 more degree-seekers.

“We’ve worked very hard on this, despite the college going rate, unfavorable windage … We’ve been working on it, and we’re sailing — I think somewhat successfully — against that wind,” Daniels said.

State officials maintain the increased drop is likely due to the lingering impacts of the pandemic, as well as the perceived cost of higher education, low unemployment rates, and a perceived low value of education beyond high school.

Getting more Hoosiers educated has been an issue of increasing concern in recent months.

State officials maintain that people with a bachelor’s degree or higher earn 85% more per year than high school graduates. The longer college takes, however, the more it can cost, and the less likely it is a student will ever graduate, according to the ICHE.

To get more Hoosiers to college, the higher education commission recommended automatic enrollment for all eligible students into the 21st Century Scholars program, which provides up to four years of undergraduate tuition to income-eligible students at certain Indiana colleges or universities.

Currently, fewer than half of eligible students enroll in the program, despite its success – more than 80% of those who complete the program go to college.

The ICHE has also called for increased funding for state financial aid programs and requiring all high school seniors to file the Free Application for Federal Student Aid (FAFSA) to qualify for financial aid.

The commission, along with the Indiana Department of Education, is additionally pushing for more Hoosier students to earn college credit while still in high school.

Lowery maintained that students who earn College Core credits are more likely to enroll in college and go on to earn degrees or technical certificates.

The Indiana College Core curriculum consists of a 30-credit-hour block of general education courses that transfer between all of Indiana’s public institutions and some private colleges.

A hopeful sign, this year, more Hoosier high schoolers than ever before have the option to earn those college-level credits while still in secondary school.

Lowery also commended a statewide grant program announced in August that will provide low-income Indiana families with funds to support tutoring for students who are struggling to recover from academic setbacks spurred by the COVID-19 pandemic. He emphasized that increasing reading and literacy rates at the K-12 level

“Reading and literacy has taken a hit with the pandemic, but it did not start with the pandemic. This, similar to the college-going rate, has been a decline and a challenge for a long while,” he said, adding that the investment is putting dollars “where it really matters.”

Indiana Capital Chronicle is part of States Newsroom, a network of news bureaus supported by grants and a coalition of donors as a 501c(3) public charity.