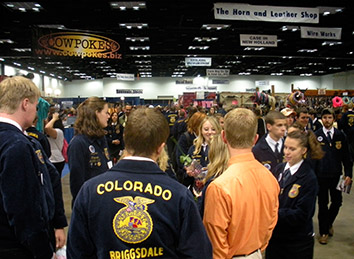 Governor Eric Holcomb and Indianapolis Mayor Joe Hogsett on Tuesday formally welcomed the return of the National FFA Convention & Expo to Indianapolis in an event on Monument Circle.

The event, typically one of the biggest annual conventions in Indy, was held virtually last year because of the pandemic.

The 94th FFA convention is expected to draw 50,000 visitors to Indy, most of them wearing blue jackets. The 94th annual convention begins Wednesday.

The convention will include many virtual events for students and schools that could not travel to Indiana.

The four-day convention is being held at Lucas Oil Stadium and the Indiana Convention Center.

Holcomb and Hogsett were joined by Visit Indy CEO Leonard Hoops and National FFA CEO Scott Stump, and others, to welcome back the teenage visitors.

FFA is scheduled to convene in Indianapolis through at least 2033, following a contract extension that was announced last June alongside the group’s decision to temporarily go virtual. The event has been hosted in Indianapolis since 2006, with the exception of a three-year stint in Louisville from 2013-2015.