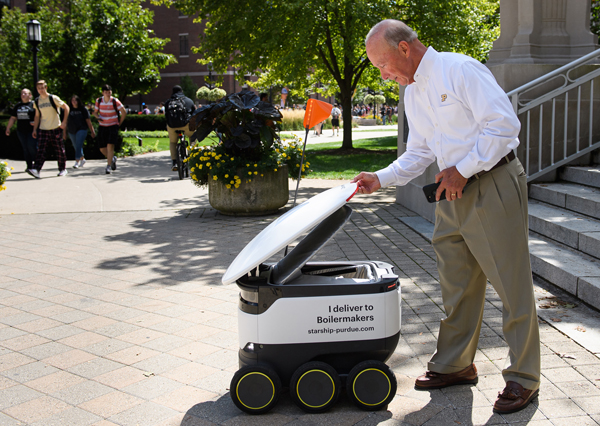 Among the new arrivals on campus at Purdue University this school year are a small class of self-directed plebes who already have a remarkably strong grasp of the grounds and dining system.

Students in West Lafayette are sharing the sidewalks with 30-some autonomous robots that can deliver food anywhere on campus. About the size of a tailgate-party beer cooler, the robots can cross streets, climb curbs, travel at night and operate in both rain and snow.

With 43,000 students on the campus, Purdue is the largest college so far to host the delivery service from San Francisco-based startup Starship Technologies. It launched at Purdue on Monday.

“Food delivery apps are becoming increasingly popular with college students, and these robots will take Purdue’s dining program to the next level,” said Beth McCuskey, Purdue’s vice provost for student life, in a media release. “This service adds more options and flexibility for our campus diners.”

The service works in conjunction with student meal plans. People can order grub through an app at a cost of $1.99 per delivery. They then can track the progress of the six-wheeled robot over its journey with an interactive map.

Starship says the robots’ guidance systems use a combination of machine learning, artificial intelligence and real-time sensors to navigate around people and objects.

The robot’s cargo hold is locked during the journey and requires instructions from the customer’s app to open.

Other Starship customers include George Mason University, which launched the service in January on its campus in Fairfax, Virginia.

“We were amazed by the volume of orders that we had when we turned the service on,” Starship Technologies executive Ryan Tuohy told NPR in April. “But what’s really touching is how the students on the campus have embraced the robots.”

Students reportedly enjoyed taking selfies with the robots when they debuted and dressing them up for holidays. And they embraced the technology for breakfast in particular.

In the first two months of the service, robots delivered 1,500 breakfast orders.

“Research has shown that up to 88 percent of college students skip breakfast, primarily because of lack of time, but that number is starting to turn around when delivery robots arrive on campus,” Starship Technologies said in a statement earlier this year.

During the first day of deliveries at GMU, the machines were flooded by so many dinner orders that school officials had to pull the plug, shutting off orders so that robots weren’t operating late into the night, far behind schedule.

A representative of Starship declined to disclose financial terms of the deal with Purdue.