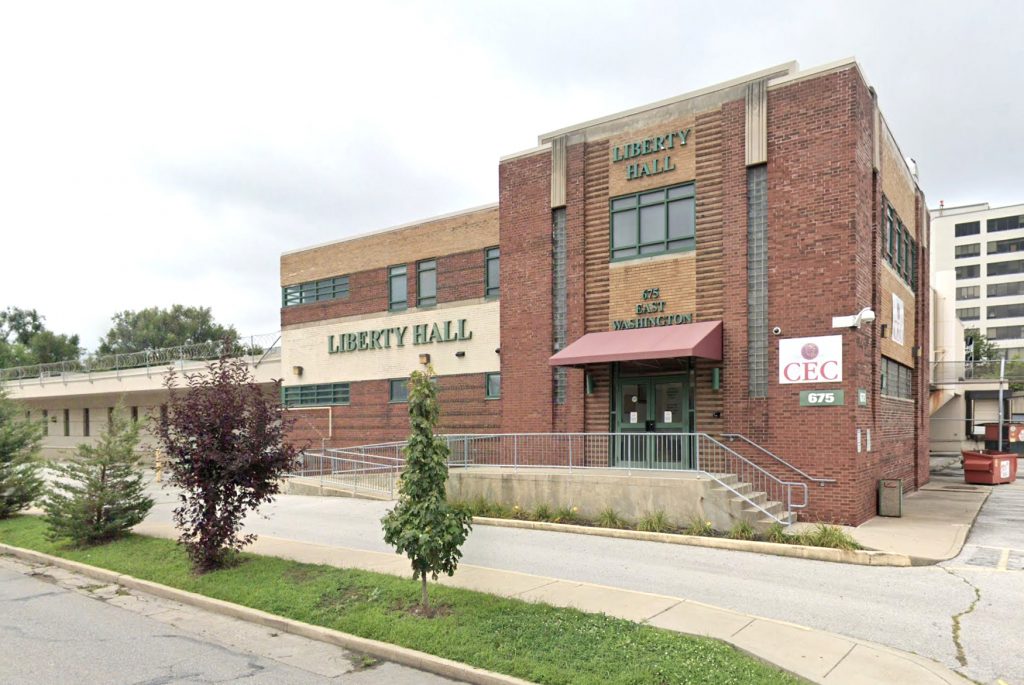 A former work-release facility in downtown Indianapolis is on the selling block as a potential redevelopment opportunity, after sitting inactive for nearly four years in an area experiencing a resurgence.

Liberty Hall, 675 E. Washington St., was listed without an asking price by the Indianapolis office of Los Angeles firm CBRE on May 1.

The 111,200-square-foot building is on a triangular, 3.4-acre lot bounded by Washington Street to the north, College Avenue to the east and railroad tracks to the west and south.

Listing broker Gordon Hendry said he expects the property to receive a great deal of interest.

“Obviously we’re coming out to market right now in a little bit uncertain times, but I don’t think that will be a hindrance at all to our ability to have a successful disposition of the property,” he said. “I think there will be strong interest” in the site.

The owner, Florida-based correctional firm The GEO Group Inc., is looking to offload the property, said Hendry, who declined to share the target sale price.

Real estate sources told IBJ the land would likely sell for at least $1 million per acre—comparable to similar deals in recent years—because of its proximity to the heart of downtown, which does not have an abundance of land available for redevelopment.

According to Marion County assessor’s records, the property’s assessed value, used for tax purposes, is about $2.4 million. The figure includes $1.25 million for land and $1.15 million for the building and other improvements. The existing facility has a 35-space parking lot and is fenced around most of its perimeter.

Hendry said he’s “very bullish” on redevelopment options for the property because of successful efforts in recent years to flip nearby parcels. He pointed to apartment projects like The Vue and Grid from developers Herman & Kittle Properties Inc. and Milhaus, respectively, and the Metazoa Brewing Co. craft brewery and taproom, which opened a block south at 140 S. College Ave. in 2016.

In 2018, Milhaus acquired part of the former Harrison College campus, about a block to the west at 550 E. Washington St., for $6.3 million for development of an apartment complex.

“It’s a very, very strong opportunity,” Hendry said, pointing out the property is in the Central Business District opportunity zone. Such zones are viewed as boons for developers, because they offer incentives for development.

“With all the prior development that has occurred … that’s now an area that is regarded as safe for investment,” he said. “It’s proven itself—you’ve got a lot of people who have put millions of dollars into that area. Developers are no longer seeing it as a speculative play.”

And Chris Wilkes, a partner and senior vice president of development at Holladay Properties, said he thinks the site would best be suited for residential or office uses—or combination of the two.

South Bend-based Holladay in 2019 completed the rehabilitation of the former Milano Inn at 231 S. College Ave., converting the building into its new Indianapolis office. The firm plans to develop the rest of that block with multifamily and office space.

Wilkes suggested multifamily development for the Liberty Hall site, including potential loft apartments with green space. He said there also might be an opportunity for a “destination restaurant” at the site that could either try to repurpose the existing structure or start from scratch.

“If you get a chance to create an environment there, it could be pretty interesting,” Wilkes said. “To get that much acreage along College, in a growing part of the city, and having that canvas to work on is pretty unique.”

He did not say whether Holladay had an interest in the site.

GEO has owned the property since April 2017, when it acquired New Jersey firm Community Education Centers, which had operated the Liberty Hall facility from 2001 to 2016 in different capacities.

Most recently, the property was a work-release facility contracted through the Indiana Department of Correction. That contract ran from 2012 to 2016. Prior, it housed low-security female offenders in Marion County’s correctional system.