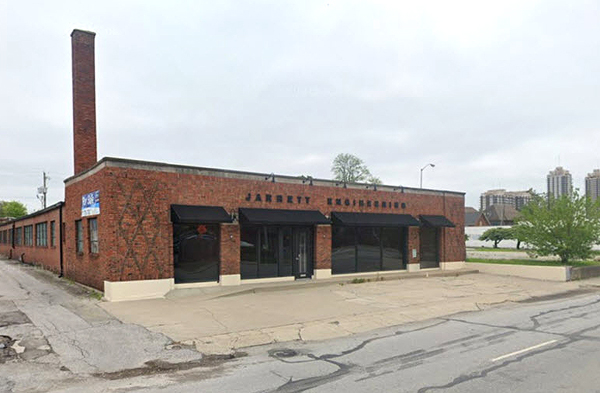 The building at 1011 N. Pennsylvania St. is being considered for a True Value hardware store. (Image courtesy of Google)

A hardware store in Lockerbie is eyeing a new spot along Pennsylvania Street, as it looks to expand its footprint and exit a block bought by a local developer in recent years.

Fusek’s True Value Hardware, 350 E. New York St., is considering moving from its current storefront to 1011 N. Pennsylvania St., where it would take over a commercial building built in the 1920s.

According to filings with the Indianapolis Historic Preservation Commission, which is expected to discuss the project in a non-binding preliminary review during its meeting on Wednesday, the move would give the store an expanded footprint, including space to add a garden center to its operations.

The building along North Pennsylvania Street is 14,580 square feet; Fusek’s current store is about 10,000 square feet, occupying part of the first floor of the 33,725-square-foot structure in which it resides.

Steve and Sue Fusek opened the Lockerbie neighborhood hardware store in June 2004, and employ about 20 people, according to its website.

The store has been in the same New York Street building since it opened, but that block appears primed for redevelopment, after four buildings there—including the one housing Fusek’s—were purchased by Gershman Partners in 2016.

The developer has not said what it plans to do with the block in the long-term, other than to invest in the buildings and surrounding area in an effort to boost office tenancy. Gershman officials did not immediately return a call for comment from IBJ.

Filings with the IHPC show the Fuseks would create a garden center and outdoor display for the new True Value, along with a new front entrance and parking lot.

According to an IHPC staff report, several variances of development standards would need to be considered for the project to move forward. They would include construction of a fence for the business and foregoing required parking lot landscaping.

A timeline for the project has not yet been publicly discussed.

The 1011 building, constructed in the 1920s, was originally the Penn-Ten Garage, before later being used as a car dealership, a different supply and tool store, and a furniture store. It is currently the home of Jarrett Engineering.

The project would turn the west portion of the building into the garden center, and would also include the purchase of the vacant lot directly south of the building. That property, 1005 N. Pennsylvania St., once housed a circa-1920s apartment building of the Georgian Revival design. That property caught fire in 2011, and was subsequently torn down; it’s been used for parking since at least 2016.

Fusek’s would retain that property as a 23-space parking lot, while adding another 31-space lot directly west of the building. The minimum required parking for the development would be 43 spaces (one space per 1,000 square feet). There would also be five spaces for bicycle parking.

Customers would enter the store from the south side of the building, according to elevations provided to the city. There would also be direct access to the gated-in garden center from the south parking lot.

The St. Joseph Historic Neighborhood Association said in a July 30 letter to the IHPC it believes “the building is a perfect fit for a hardware store,” and that the development would “boost visibility and inject some vigor” into the corridor.

The 1011 building and the parking lot to the east are currently owned by FDC Properties Inc. No. 16, according to city property records. They recently were listed for sale by brokerage Colliers International for $2,175,000.

The parking lot to the south at 1005 N. Pennsylvania St. is owned by Gresk & Singleton LLP. It is not clear whether any of the parcels are currently under contract by the Fuseks.

Steve Fusek did not return a call requesting comment for this story.