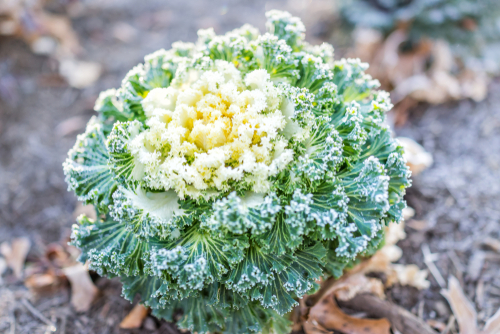 Yellow kale is among the plants that can live through a frost and, in fact, like cooler weather better than the hot summer. (Shutterstock)

Cleaning up some frosted bean and marigold plants the other day, I thought of a weather report I heard recently on the radio. The announcer stated: “Freezing temperatures are predicted for tonight, thus ending the gardening season.”

His deadpan delivery of this dramatic—for gardeners—statement, as well as what he said, tells me that he was no gardener. Freezing temperatures do not end the gardening season.

Despite that frost, aren’t there still leaves on trees, some of them still to turn spectacular, fiery colors? If I can’t consider trees part of my “garden,” how about some shrubs in the flower beds? Butterfly bush is still coughing out a few fragrant blossoms. Rhododendrons and heaths look as spry the morning after the freeze as they did during the warm day before it.

Okay, so maybe the guy on the radio meant vegetables and herbaceous flowers when he was talking about gardening. Yes, bean and marigold plants definitely froze to death as recent night temperatures plummeted to 29 degrees Fahrenheit at my upstate New York home, as did zinnias, corn, peppers, cosmos and bachelor’s buttons.

But even weekend gardeners grow more than just these tender vegetables and annuals. Black-eyed Susans are still dressed up like it’s summer, and mums—doesn’t just about everybody plant mums?—are unfolding new blossoms. Perennial flowers generally are unfazed by temperatures down into the 20s.

Among annual flowers, there are plenty that likewise are unfazed by freezing temperatures. Strawflowers, for example, as well as snapdragons and pansies are still perky. These latter two are actually perennials that are grown as annuals this far north, and they survive our winters if temperatures don’t dip too low.

Look around and you might even find some tender annual flowers still treading water through the frosty spell. A wall, paving or tree canopy each prevent temperatures nearby from dropping as low as in more exposed locations. In a flower bed butted up against the west wall of my house, zinnias and marigolds still look spry.

Let’s go back to the vegetables now. Although freezing temperatures snuffed the life from tender veggies, there are plenty of cold-hardy ones in the garden. Kale, spinach, broccoli, lettuce and radishes look fine after a night or a few nights of below-freezing temperatures. In fact, these vegetables look and taste better during this kind of weather than they do in summer heat.

With a bit of planning, a fall freeze doesn’t need to leave the vegetable or flower garden looking forlorn. If you have planted plenty of hardy vegetables and flowers, the freeze acts on the garden the way a developing solution acts on a photograph: As tender plants wilt and are cleared away, hardy plants come into prominence.

Effecting this transformation means choosing hardy plants and giving them enough time to grow. With sunlight at a premium this time of year, all plants, whether hardy or tender, make little growth. That weather reporter might more correctly have stated that the growing season, not the gardening season, was drawing slowly to a close. Not because of one frosty night though.

Lee Reich writes regularly about gardening for The Associated Press. He has authored a number of books, including “Weedless Gardening” and “The Ever Curious Gardener.” He blogs at http://www.leereich.com/blog. He can be reached at garden@leereich.com.