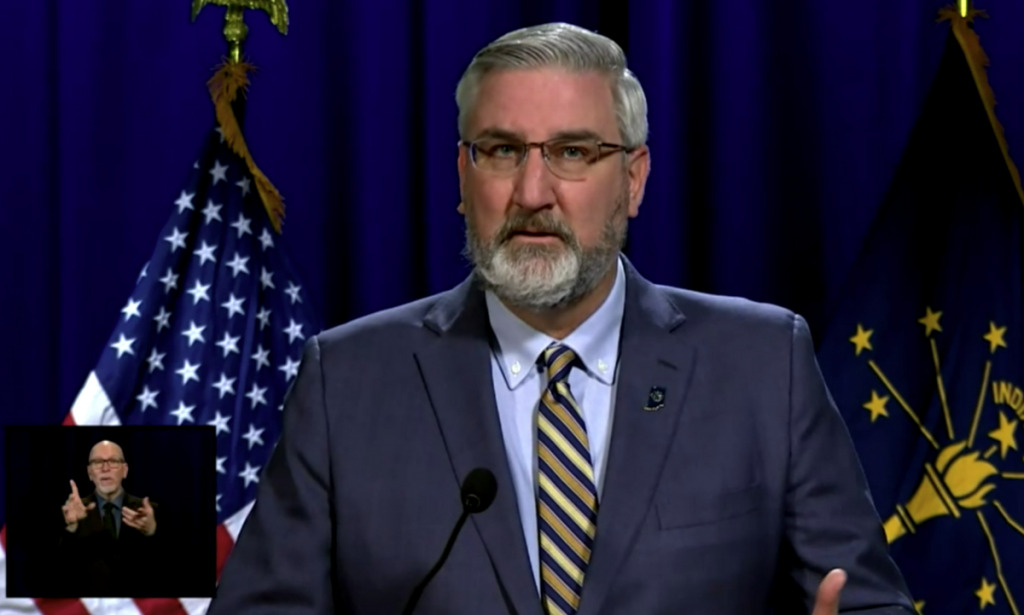 Indiana Gov. Eric Holcomb, in an opinion piece distributed to media outlets on Thursday, solidified his support for legislation that would provide state tax cuts—and went a step further by asking for an even deeper reduction in income taxes than proposed by House Republicans.

“Indiana is fiscally strong and continues to grow at a rapid rate,” Holcomb wrote in the op-ed. “As our revenues exceed forecasts month after month, it has become clear that the time is now to act on a tax plan that gives back to our growing business community and to hardworking Hoosiers.”

The governor also said he wants to eliminate the minimum property tax that businesses pay on new equipment, also known as the 30% depreciation floor. That tax cut proposal was already part of the governor’s 2022 agenda, as well as part of the House tax cuts package. He also supports eliminating the utility receipts tax.

Holcomb wrote that his administration has been “carefully monitoring” the state’s finances, and noted Indiana has exceeded revenue forecasts for the past six months and expected to again when the February revenue reports are released.

He also said cutting taxes would help Indiana residents who are paying more for average items daily because of inflation.

“We will grow not just our economy, but Hoosier paychecks as well,” Holcomb said.

Still, where state lawmakers will compromise on tax cuts and who will budge on what remains unclear, even with Holcomb’s backing. Senate Republicans have been hesitant to cut taxes, saying the economy remains uncertain.

The Senate gutted all tax cuts from the House tax package, but the bill is headed to a House-Senate conference committee where lawmakers can negotiate the final outcome of the legislation.

Now is the time for Hoosier Tax Relief

Indiana is fiscally strong and continues to grow at a rapid rate. As our revenues exceed forecasts month after month, it has become clear that the time is now to act on a tax plan that gives back to our growing business community and to hardworking Hoosiers.

When SB 1 hits my desk to sign into law in a couple of days, it will ensure the maximum number of Hoosier taxpayers will receive their portion of the $545 million automatic taxpayer refund this year.

That’s just the latest in a long list of tax cuts. Since 2005, Indiana has demonstrated strong stewardship of taxpayer dollars while constantly finding ways to responsibly return those dollars to the people and businesses that have helped our state grow—proving that cutting taxes can increase revenue. During that period, we have cut taxes at least 10 times and paid down billions of dollars in debt. Most recently, Indiana’s corporate income tax rate fell to 4.9% last July.

My administration has been carefully monitoring our finances. In each of the last six months, Indiana has exceeded forecasted revenues. And this Friday, March 4, we expect to see this trend again when February revenues are posted.

That’s why we can provide immediate assurances to individual taxpayers and businesses that their hard-earned money will be returned to them now in a fiscally prudent and impactful fashion. We can achieve that by:

• Cutting Indiana’s individual income tax rate to 2.9% over time, making Indiana tied as the lowest rate among states with an income tax

• Reducing the Indiana State Teachers’ Pre-96 Retirement Fund by paying off another $2.6 billion at the end of this fiscal year

• Eliminating both the Utility Receipts Tax (URT) AND the 30% tax floor on Business Personal Property for all new equipment.

I am confident this plan can be responsibly achieved while balancing our ongoing priorities and maintaining prudent levels of fiscal reserves.

The Indy 500, held every year on Memorial Day, always reminds me about teamwork, speed and competition. With those three factors in mind, I suggest Team Indiana move ahead to reinvest in ourselves and our state’s future growth.